No one was going to catch Kristine Brynjolfson and Megan Rathwell after a strong early breakaway in the 80-kilometre women’s race.

The duo spent most of the race alone in front, steadily building a gap up to three and a half minutes before Brynjolfson won the final uphill sprint.

“If there was a break I wanted to be in it,” she said. “But when Megan and I got a big enough gap I encouraged her to roll with me, and we kept getting increasing time gaps so we needed to keep going as hard as we could to hold them off.” 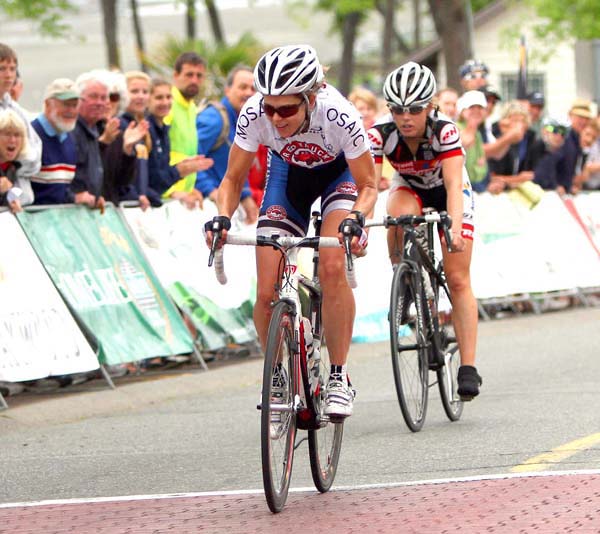 It was a big win for the 42-year-old, who moved from Delta to Kamloops last year, but came back to BC Superweek with the local Trek Red Truck team

“It means a lot, my parents came out and they were excited to see me win,” said Brynjolfson. “Riding for a local team at a local race – I’m pretty happy.”

Making that feat more impressive was the fact Brynjolfson had to put her own chain back on three times during the race, which left her doubtful it would hold for the final sprint. It did, and she crossed just ahead of a gassed Rathwell.

“I’m not a sprinter so I haven’t won many bunch races so this is a big win for me,” she said. “Typically she has a little better sprint but I knew she was hurting.”

Rathwell, riding out of Victoria for Russ Hays/Accent Inns, had to settle for second – and winning the Queen of the Mountains as the best climber.

“I really wanted to win this,” said Rathwell, a strong climber who finished third in a bunch sprint at last year’s race. I like climbing and there are not too many climbing races in B.C. unfortunately. I’ve been able to outsprint her in crits this week too, but sprinting up Columbia took it out of my legs. She deserved it.”

Rathwell was surprised the rest of the field didn't try harder to reel her in.

“I thought Rhae Shaw would try to track us down,” she said.

Shaw did. In fact, she was leading before suffering the first of two flat tires at the top of a big climb, forcing the reigning Canadian Criterium Champion and winner of Saturday’s White Rock Criterium to play catch up all by herself. Shaw, who competes in Europe with the National Team and rides for Exergy Twenty12 out of Seattle, got back to the main group and finished sixth after a final sprint for third won by Quebec’s Joanie Caron of the Colavita espn-W Pro Cycling team.

Omniums, or Overall Titles
That clinched the women’s overall title for BC Superweek for Caron, while Carrie Cartmill, who won Friday’s Hillclimb, finished fourth to claim the Tour de White Rock omnium, or overall, title in a tiebreak ahead of Shaw.