The 2014 UCI Track World Championships got started on Wednesday in Cali, Colombia, and while the Canadian Track Cycling team is not set to race until Thursday, the first day of racing showed that the track is fast - with multiple track records already set.

Thursday will boast a full day of racing for Canadians, with the World Cup champion Women's Team Pursuit squad competing in the qualification round in the afternoon with the goal of reaching the medal finals in the evening. Defending champions Great Britain, Australia and the USA are all expected to provide stiff competition. 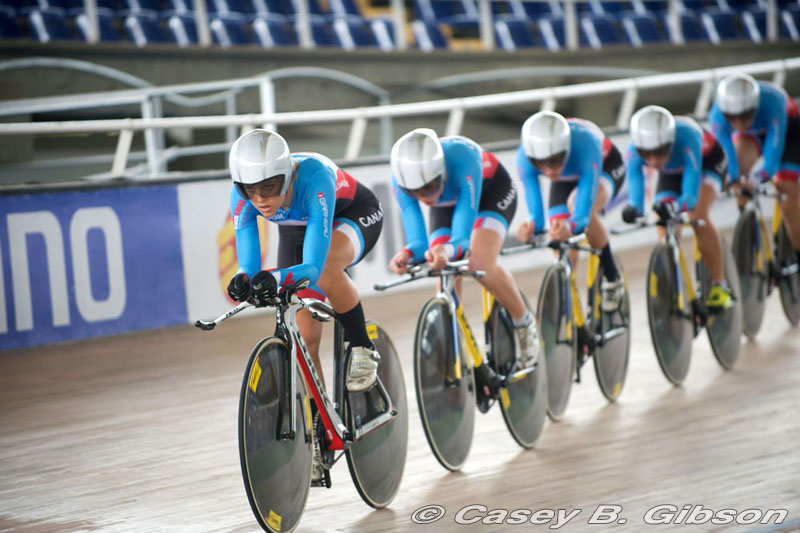 Team member Laura Brown says, "this season has been special in terms of coming together as a team, and success this year is a testament to that. Tomorrow is about doing what we do best. We are among the best in the world and if we stay focused something special will happen."

Also on track Thursday afternoon in the Men's Keirin is Hugo Barrette, who finished fourth at the final World Cup of the season. Barrette will be aiming move through to the final rounds in the evening.

"The team has had a great three-week preparation block in Los Angeles and Cali, and are cautiously optimistic that they will come home with a medal at these Worlds," says Cycling Canada Track Endurance coach Craig Griffin. "The colour of the medal will depend on how well the plans are executed. Fifty per cent of our team have never competed at Worlds but all are motivated to leave everything on the boards. These are exciting times for Cycling Canada as there is way more to come."

High Performance Director Jaques Landry commented, "the staff and athletes are ready for this event. We have a small team this time around, comprised of new and more experienced riders; but all are focused on the task at hand and know that they are contenders. What is encouraging is that we are still in the building phase leading into Rio and, with top international level coaching driving the program, and soon coming into our home in Milton, increased success is inevitable."