Canada is sending one of its largest and strongest teams ever to the Track World Championships in Hong Kong, with 15 riders competing in 17 of the 20 events on the schedule.  The only events Canada will not be in are the Women's 500m Time Trial, and the Men's Scratch Race and Madison.

A total of 370 athletes (220 men and 150 women) from 42 countries are registered for the Championships.  The addition of the Women's Madison for the first time brings parity to the Worlds programme for men and women.  This year will see the opportunity for a number of new faces on the podium, with the post-Olympic retirement of some athletes.

The Endurance events consist of the Omnium, Individual Pursuit, Scratch Race, Points Race and the two team events - the Team Pursuit and the Madison.  The Omnium has changed its format significantly, dropping the individual timed events. 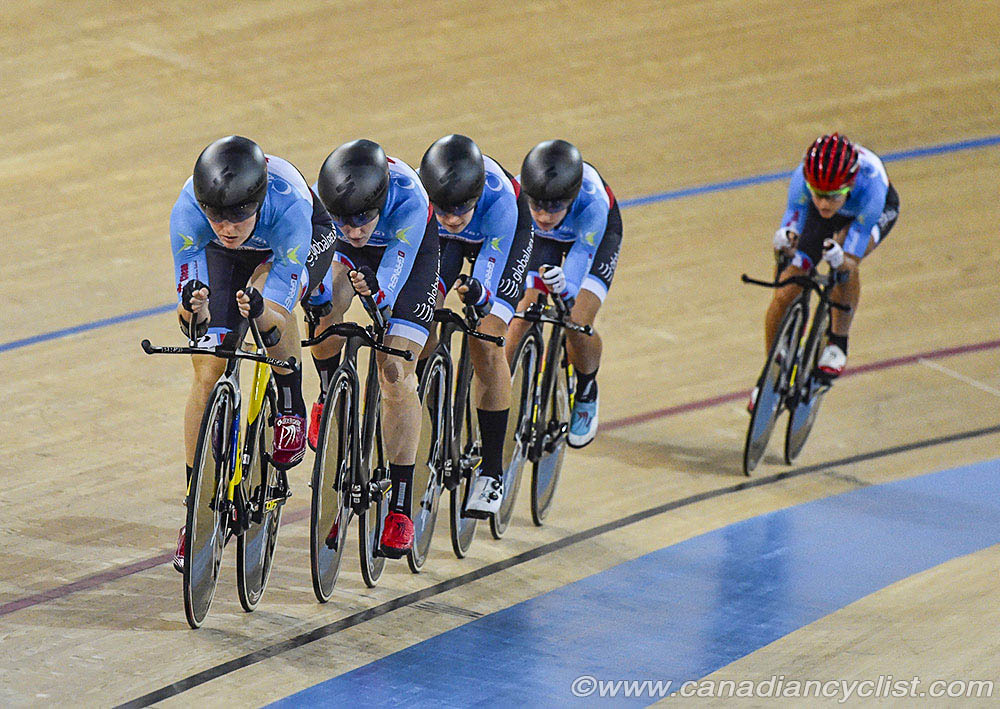 Canada's Women's Endurance team will include five riders.  All five are members of Canada's consistent medal-winning Team Pursuit squad, and each will also participate in additional events.  Jasmin Duehring, a two-time Olympic bronze medalist, will race the Points Race, in which she won a silver medal at the Worlds in 2016.  Steph Roorda and Laura Brown will compete in the first-ever Women's Madison at the world championships, with Roorda also entered for the Omnium and Scratch Race; in the Scratch Race, Roorda is the defending silver medalist.  Kirsti Lay and Annie Foreman-Mackey will compete in the Individual Pursuit, where Foreman-Mackey is the defending bronze medalist.

Craig Griffin, the Women's Track Endurance Coach, says, "These Worlds are exciting for us, for a few reasons.  We are sending a full team of men and women, in Sprint and Endurance.  I think it's the first time in a long time that we have been able to do this.  Coming off the Olympic Games is always a time for reflection and of rebuilding.  We are now past the reflection and in the process of rebuilding.  Since it's three and a half years until the next Olympic Games, we got some time so the approach has been a bit different.  Athletes have been given the time to spend on the road with their road teams and just catch their breath a little bit."

"It's not our traditional approach for preparing riders, but I feel confident that we have enough experience and ability to hopefully get into the medal rounds for the Team Pursuit.  The other thing we've been able to do is field a rider in every event on the women's side.  We haven't had the luxury of doing this with such a huge Team Pursuit focus the last few years.  This year is really a great opportunity for athletes to try some new events and some different training.  We are also working hard with our NextGen program to develop the next group of Olympians."

With respect to the Madison, Griffin says, "we were lucky to get in, because we didn't have many opportunities to qualify; Los Angeles was the only World Cup we did [in the Madison], and we had a crash with Laura [Brown], who was taken down from behind during an exchange.  otherwise, we could have probably finished a few spots higher.  It was their first Madison in competition, and now they are fitter.  But it's as much technical and tactical as it is physical, so very rarely do the strongest riders win; it's the best execution and tactics that prevail.  We got a long way to go in the Madison, but the only way to get better is to race." 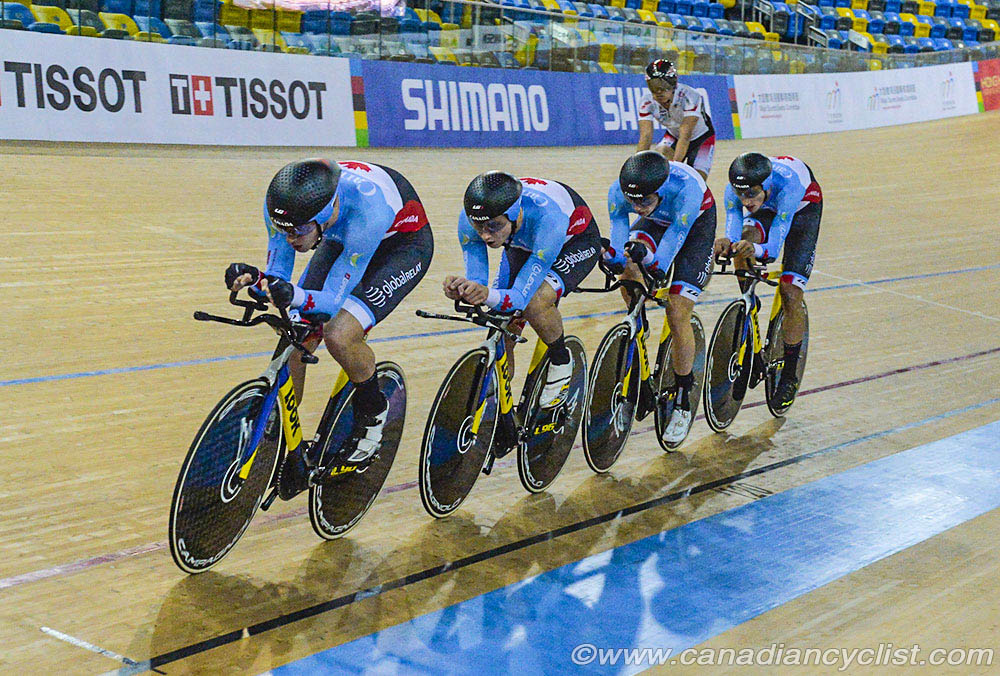 The Canadian Men's Endurance squad comes to the world championships after their best World Cup season ever, with a win in the Team Pursuit at the second round of the World Cup.  Since then, they have been road racing in Europe with a number of top-10 results.  All five are scheduled for the Team Pursuit, with Aidan Caves also selected for the Omnium.  Canada has also qualified for the Points Race and Individual Pursuit, and selections will be made onsite for these events from Caves, Adam Jamieson, Jay Lamoureux, Bayley Simpson and Derek Gee.

Looking beyond Canada, Great Britain took both the Omnium and Team Pursuit in the women's competition at Rio, but Laura Trott, who won the Omnium and was a key member of the Team Pursuit squad, is on hiatus while she and husband Jason Kenny have their first child.  Trott is also the defending world champion in both the Omnium and the Scratch Race.  Sarah Hammer (USA), the Rio Omnium silver medalist will be a favourite for the podium in the Omnium, Scratch Race and Points Race.  Others to watch include Jolien D'Hoore (Belgium), the Olympic bronze medalist in the Omnium, Kirsten Wild (Netherlands), the silver medalist at the 2016 world championships in the Scratch, and Rebecca Wiasak (Australia), the defending Individual Pursuit world champion.  In the Team Pursuit, Olympic champion Great Britain is missing two riders from that team, but defending world champion USA and silver medalist Canada are both at full strength.  The Madison is a new event for women, so there is no history other than two World Cups this season, where Great Britain, France and Australia were the top teams.

In the men's Endurance events, a number of top riders are missing, including all three Olympic and world champion medalists from the Omnium, making this event wide open, particularly given the new format.  The defending champions for the Individual Pursuit  - Filippo Ganna (Italy) - and Scratch Race - Sebastian Mora (Spain) will both be in Hong Kong, as will Points Race silver and bronze medalists Andreas Graf (Austria) and Kenny de Ketele (Belgium).  In the team events, the Team Pursuit Olympic champion British squad is missing three of the four riders, and both the silver (Australia) and bronze (Denmark) teams are also missing key members.  In the Madison, neither rider on the British winning team will be in Hong Kong, but both the silver (France) and bronze (Spain) teams will be in attendance.

The Sprint events consist of the Match Sprint, Keirin, 1000m/500m Time Trial (men/women) and the Team Sprint.  Many athletes compete in all events.

Canada's Track Sprint program has come a long way in a short time.  At the 2012 London Olympics, Canada struggled to qualify two riders; one man and one woman.  Contrast that with Hong Kong, where Sprint squad will consist of five athletes; two women and three men.  Both the men's and women's squads are coming off a strong finish to the Track World Cup, with the Women's Team Sprint duo of Kate O'Brien and Amelia Walsh taking silver in the final round of the World Cup, and also Hugo Barrette winning a silver medal in Men's Keirin. 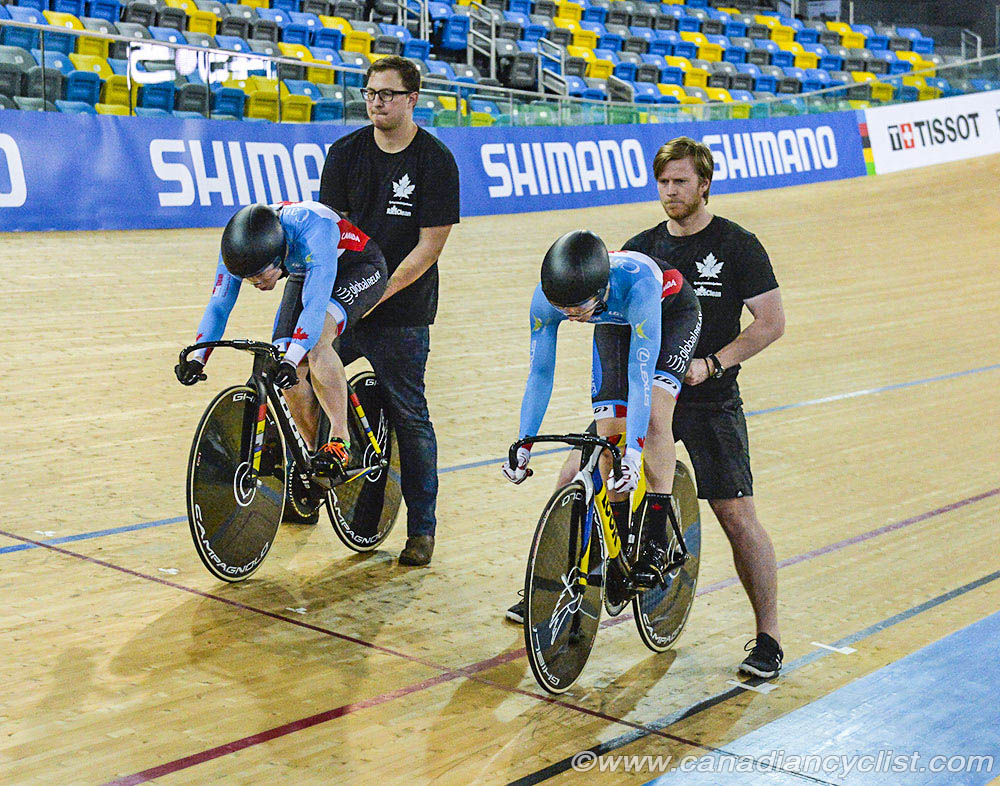 O'Brien and Walsh get ready to start in training

O'Brien and Walsh will race the Team Sprint, with O'Brien also competing in the Sprint and Keirin.  Barrette will be joined by Stefan Ritter and Patrice St-Louis Pivin for the Men's Team Sprint.  Barrette will also compete in the Sprint and Keirin, while Ritter will race in the 1000 metre Time Trial, where he is the current Junior world record holder. 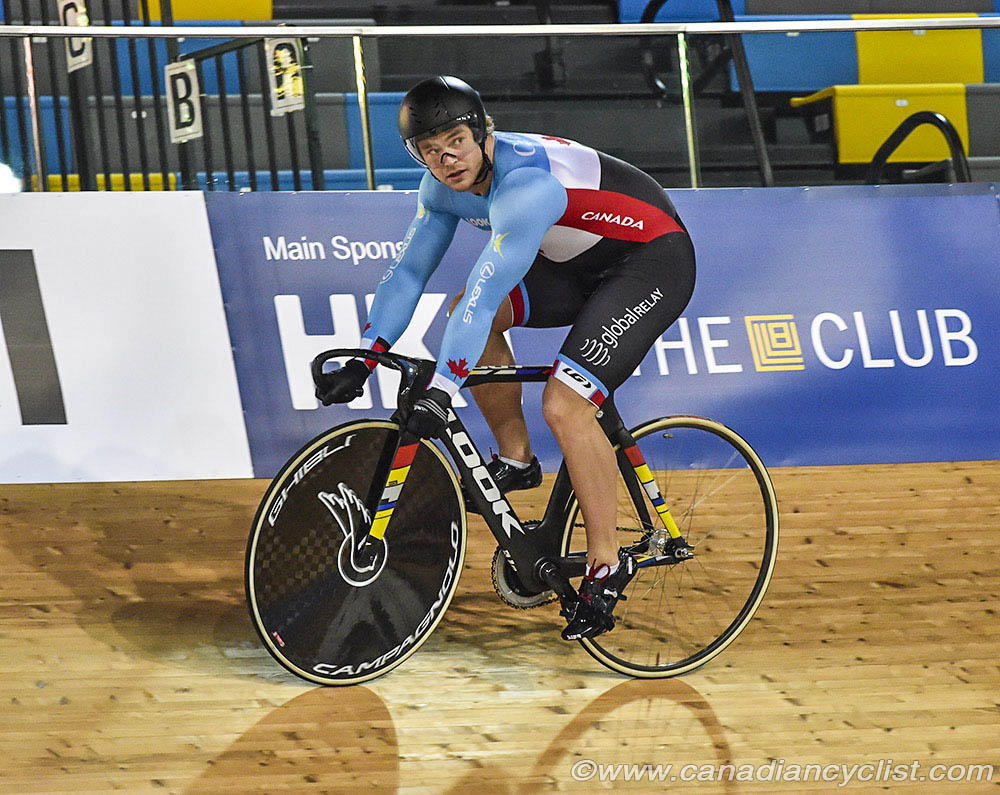 The program really began to take shape in 2013, when Cycling Canada hired a dedicated Sprint coach, two-time Olympic medalist Erin Hartwell.  Since then, Canada has taken three athletes to the 2016 Olympics; and won multiple World Cup medals, including a silver and bronze in the final World Cup leading into the world championships.

"A program had to be developed," explains Hartwell.  "I was hired December of 2013 and the first World Cup was a month later in Guadalajara [Mexico].  At that point we had two cyclists in the sprint program; Hugo Barrette and Joe Veloce.  There was no bonafide program; we had no women of an international standard, because Monique [Sullivan] had retired and Kate [O'Brien] had not yet been discovered.  So it was a fairly tall task."

Now it is the start of a new Olympic cycle, and Hartwell feels the Canadian sprint program is in a strong position.

"Milton was the proverbial game changer, and now we can start the beginning of a new quad [Olympic four year cycle].  Instead of having just two years to thrash about and try to piecemeal a team together for the Olympic Games, we actually have four years to fully prepare, and that's a very exciting opportunity for us."

Beyond Canadian chances, only one Olympic champion from the individual Sprint events at Rio will compete in Hong Kong - Sprint gold medalist Kristina Vogel (Germany).  Vogel has been almost untouchable in women's competition since the Olympics, and is a clear favourite in all the events, including the Team Sprint, with her Olympic bronze medal partner Miriam Welte, who also registered for Hong Kong.  Other medal contenders include the Russian duo of Daria Shmeleva and Anastasiia Voinova, plus reigning Sprint world champion and Olympic Team Sprint champion Zhong Tianshi of China.  Also watch for Lee Wai Sze of host Hong Kong, who won the 500m Time Trial title in 2013, and won silver in the same event last year.

Rio triple gold medalist Jason Kenny of Great Britain is taking a hiatus from competition, leaving the door open on the men's side for numerous contenders.  Kenny's compatriot Callum Skinner, who won Olympic gold with Kenny in the Team Sprint and silver in the Sprint, will have the chance to step out of the shadow of his countryman.  Others to watch for include defending Keirin and 1000m world champion Joachim Eilers (Germany), Denis Dmitriev (Russia), the Rio bronze medalist in the Sprint, Matthijs Buchli (Netherlands), the Keirin silver medalist in Rio, Matthew Glaetzer (Australia), who won silver at last year's world championships, and Azizul Hasni Awang (Malaysia), who took bronze in the Keirin at Rio and in the past two world championships.  Finally, the complete Olympic silver medal Team Sprint squad from New Zealand will be in attendance - Edward Dawkins, Ethan Mitchell and Sam Webster.  These riders will be medal contenders in both the team and individual events, while the Netherlands and Germany are strong podium contenders for the Team Sprint.

Note: Hong Kong is on the other side of the dateline, so 12 hours ahead of Canada ET...