The Team Sprint duo of Kate O'Brien and Amelia Walsh are having an excellent first season working together, with a silver medal in the final round of the World Cup and now finishing fifth overall at the world championships, missing the medal round by one place.  Russia successfully defended their title, beating Australia in the gold medal final, with Germany taking third. 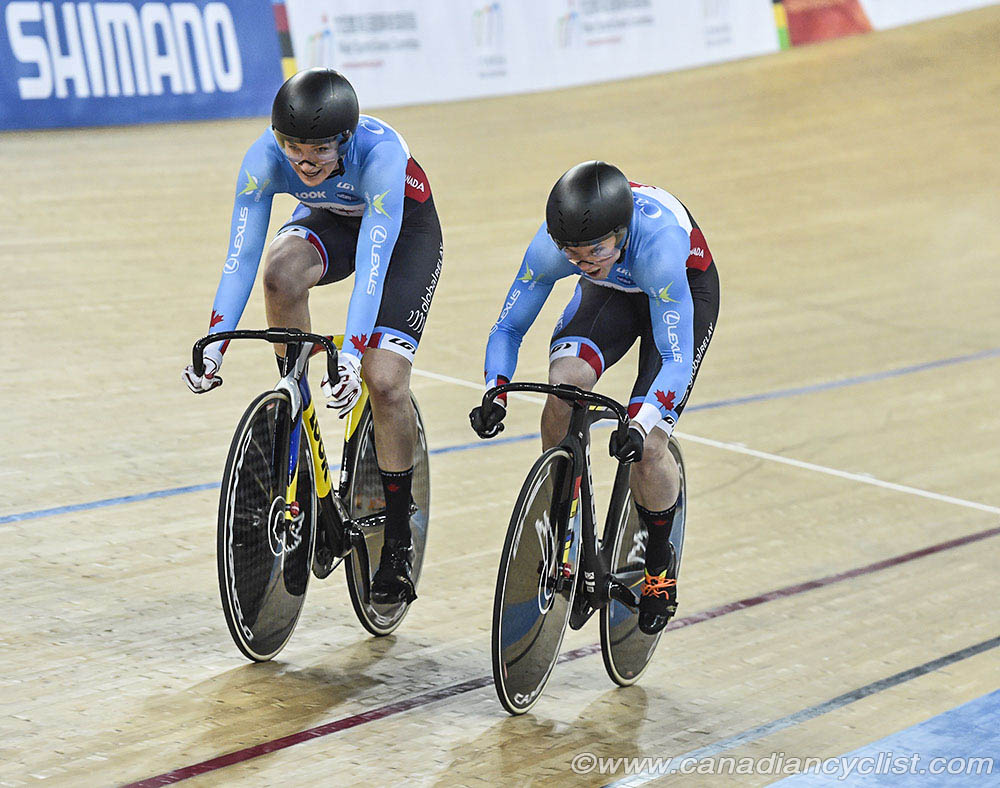 "I'm very pleased," agreed Erin Hartwell, Sprint Coach.  "I was projecting sixth to eighth, with fifth being the best possible we could attain.  We came up on Spain to take fifth after qualifying seventh, which was a huge ride for us.  Overall, a very solid night for the girls."

O'Brien commented "Yeah, it was good.  Walshy is pretty new to it still and, although technically I'm the veteran, I am still pretty new myself so fifth place is a good result.  I think that there is more to come.  I tried to execute as best I could and the rides felt good, with Amelia getting a PB [Personal Best], so it's promising."

For Walsh, it was her first Worlds and the end of her first season on the track.  "It's pretty good.  My first ride was a bit sloppy, so I knew I could clean it up for the second one.  But both of them were a PB in competition, so I'm pretty excited about it.  I'm excited for the future, and I said to Kate that I'm sad it's over.  I'm going to T-Town [Trexlertown] to get some individual racing in, and hopefully I'll be in the individual events next year." 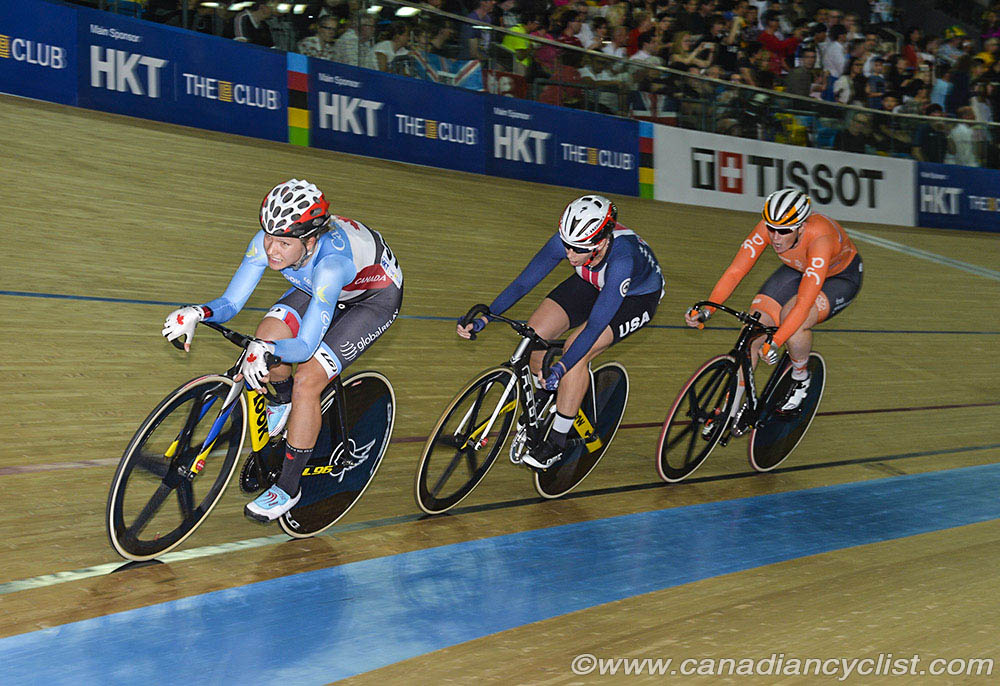 In the 10 kilometre Scratch Race, Duehring was part of an initial three rider break that grew to six before lapping the field.  Duehring immediately attacked again, but was brought back with three laps to go.  Italy's Rachele Barbieri won the field sprint to take the medal, with Elinor Barker of Great Britain and Jolien D'Hoore of Belgium completing the podium.

"This year's been a little different in preparation, so I didn't really know what to expect," explained Duehring.  "The Scratch Race is one of those races that can go any which way.  I'm happy that I read the race right and made the move to take the lap, but unfortunately, the others in the break were pretty strong sprinters and we got the field so late in the race that there wasn't an opportunity to make another move." 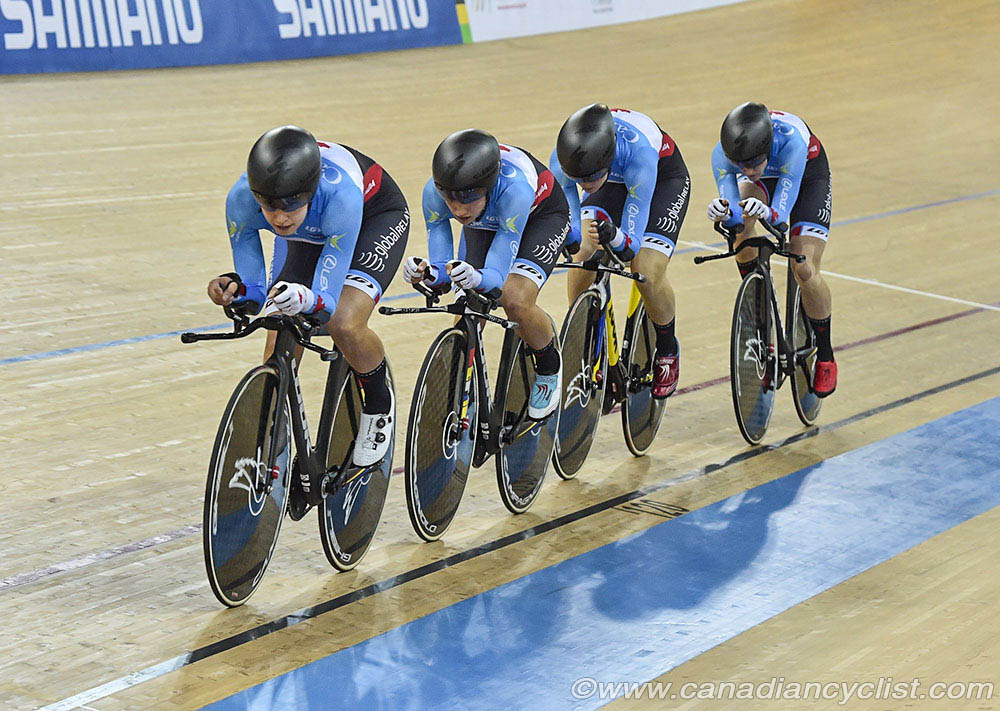 In the Women's Team Pursuit qualification round, the Canadian squad of Laura Brown, Jasmin Duehring, Annie Foreman-Mackey and Steph Roorda set the third fastest time, behind the United States and Australia.  Canada will race Australia on Thursday, with the winner going to the gold medal final.

"I was satisfied with how we performed today," said Craig Griffin, Women's Track Endurance Coach.  "There were a couple of errors in the middle of the ride.  We can clear those mistakes up and have some more time up our sleeves.  We'll make some changes and we got five good riders we can rotate through for the next round, so we can have a good race against Australia tomorrow and hopefully move through to the gold medal race."

"I think for the Team Pursuit we had a good ride," said Duehring, "but we know we can do a lot better.  We are still in a really good position going into tomorrow, to make the gold medal final.  Italy was super impressive today [4th]; it's really great to see other teams come up and push the more established nations.  The depth of the competition is improving year after year, and it is a run for the money just to make the finals now."

Canadian men also competed on Wednesday in the Team Pursuit and the Team Sprint.  The Team Pursuit squad of Aidan Caves, Adam Jamieson, Jay Lamoureux and Bayley Simpson suffered a bad crash with two laps remaining and did not finish the race.  Unfortunately, Caves suffered a broken collarbone in the crash and will not be able to compete in the Men's Omnium on Saturday. 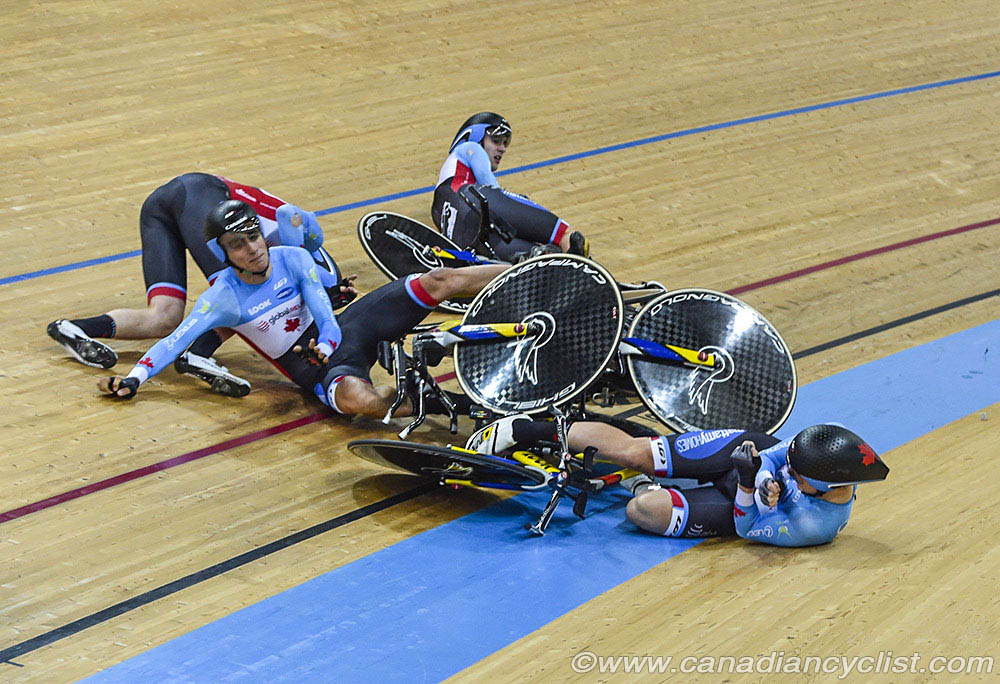 Canada was disqualified for the Team Pursuit because, according to officials, the team ignored flags telling them to ride without exchanges [the first rider pulling up and dropping to the back] while the New Zealand team was overtaking.  The crash occurred coming out of Corner Two, when the final New Zealand rider came down a bit early and the front Canadian [Bayley Simpson] went up a bit, touching his back wheel.  When Simpson went down, the three riders behind ran straight into him.

"It was a tough afternoon for the team," admitted Ian Melvin, Men's Track Endurance Coach.  "We had great preparation coming into these world championships; and the boys are in the form of their life.  It was a tough day and never really seemed to get things going.  The Kiwis [who Canada was racing against in qualifying] were on a blistering pace and as they caught us, a rider was clipped by our first rider, and the whole group hit the floor.  We've got to take today out of the equation because it's been a fantastic year for the team, including a World Cup win.  We know we are going in the right direction, today is just one of those humbling days that comes around once in a while."

The Team Sprint squad of Hugo Barrette, Stefan Ritter and Patrice St-Louis finished 15th, with New Zealand successfully defending their title.  Erin Hartwell admitted that for the men's team sprint squad it wasn't as successful a day.  "It was a bit of a mixed bag for the guys.  Patrice has a personal best, so he continues to make great strides.  Hugo had the fourth fastest middle ride, so we came through at one to go in eighth place.  But it's a three man event and Stefan is still earning his stripes.  He's doing what he can, and he's done a phenomenal job to get to this point in his season as an Elite.  But we have some time to work on that."