Canada finished sixth in the Women's Team Pursuit on Thursday at the UCI Track Cycling World Championships in Hong Kong.  It was a disappointing result for the squad that has finished in the medals at the world championships every year since 2012, and has won two Olympic bronze medals.

On Wednesday, the team qualified third, leaving the possibility open to making the gold medal race.  However, in the round of eight teams on Thursday, Canada could only manage the sixth fastest time, putting them out of contention for either the gold/silver or bronze finals later in the evening.  The Olympic and world champion British team also missed the medal rounds. 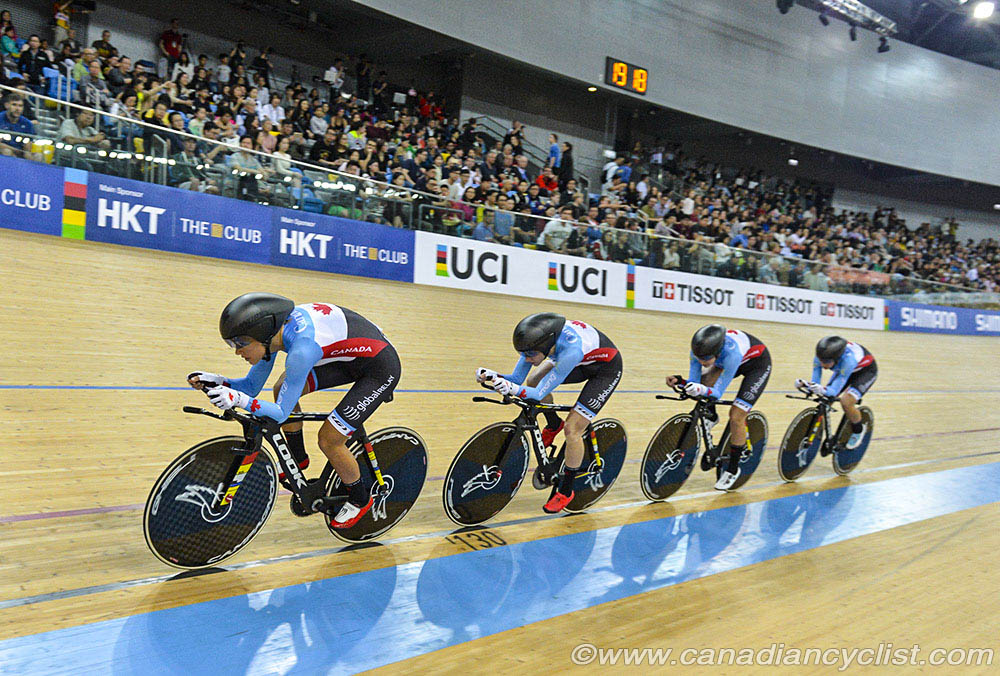 The team of Laura Brown, Jasmin Duehring, Annie Foreman-Mackey and Kirsti Lay had a strong start against Australia, taking the lead for the first 3250 metres of the 4000 metre race, before fading in the final three laps.  Australia would win the silver medal behind the United States.

"I won't say it is a complete surprise," admitted Craig Griffin, Women's Track Endurance Coach.  "The depth of field here is such that we knew coming in it was going to be tough.  The girls rode their hearts out and that's all I can ask as a coach.  We didn't have the length of preparation that we usually have, so we knew we were less than optimally prepared."

"It's tough not riding for a medal, but we've got to step back and look at where we are.  It's a nice reminder to the girls and the coaching staff that the game is changing, so if people want to be around for the next three or four years a commitment has to be made.  The timing is good; you can't get a medal forever ... this will force riders to decide how much they are willing to give from a commitment standpoint."

"As the women's sport develops the depth of field is going to continue to increase, and this is great for the sport and women's cycling in general.  I'm really happy to see this get tougher, but it means we can't expect to be on the podium all the time either.  This is a wake up call for everyone.  So now we have to get back to reality and see who's prepared to do what over the next three years."

The Women's Team Pursuit final had spectators standing and cheering.  Defending world champions United States charged out to a lead of over a second in the first kilometre, but Australia came back at the 2500 metre mark and the lead began swinging back and forth for the rest of the race.  Going into the final lap, Australia led by 0.412 seconds, but Chloe Dygert went to the front for the United States and drove her team to the finish line for the win.  New Zealand beat Italy for bronze.

In other competition, Kate O'Brien qualified 14th in the Women's Sprint 200 metre time trial, with a time of 11.106 seconds.  She won her first round race against Shanne Braspennincx of Netherlands, but then faced reigning Olympic champion Kristina Vogel of Germany in the next round.  O'Brien rode a tactically smart race, but was just beaten by a strong rider.  Hugo Barrette did not advance past the first round of the Men's Keirin, finishing fifth in his first race and fourth in the second. 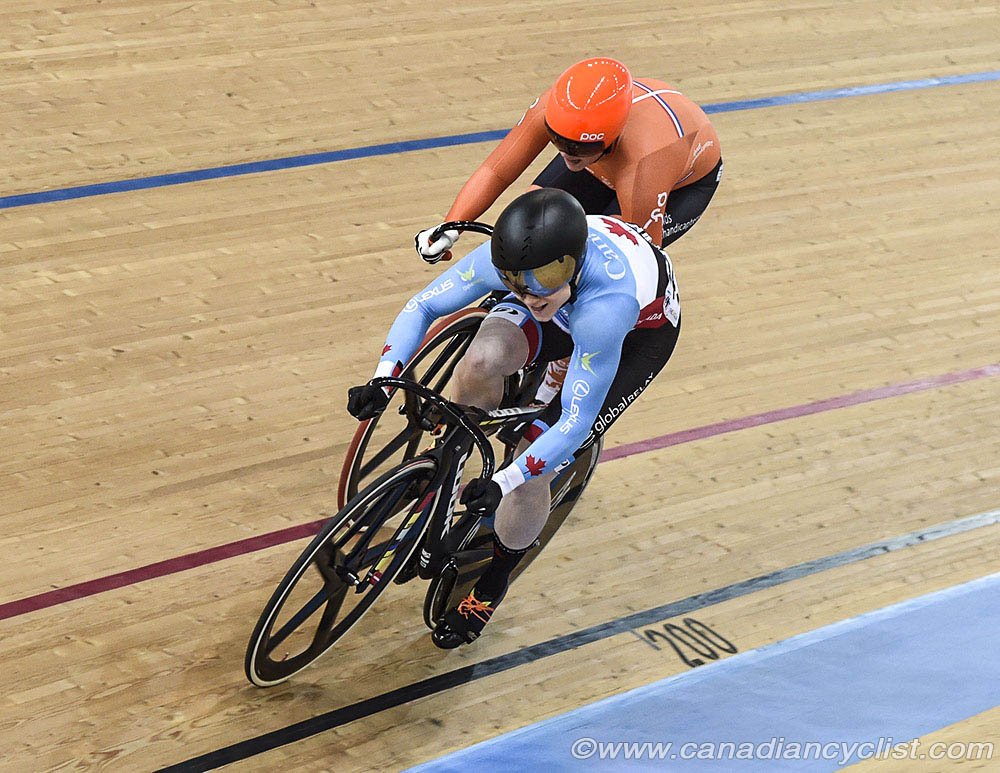 "Worlds can be a funny thing," said Erin Hartwell, Sprint Coach.  "Last night's Team Sprint [ where Canada finished a career-high fifth in the women and a disappointing 15th in the men] took a lot out of everyone, so we saw a bit of flatness today.  For Hugo, we still some tactical work to do with the new Keirin format."

"For Kate, she is a little bit sick and we are trying to deal with that.  She has two days to recover for Sunday's Keirin.  She wasn't on top of her form and it was reflected in her performances.  It's always going to be hard going up against someone like [Vogel]; that's a hard second ride.  If there's any silver lining, it's that tactically Kate's getting better and better every race."

The Men's Keirin final saw Azizulhasni Awang win the first ever world title for Malaysia.  In the final lap, Awang made an incredible attack over the top of the field to drop the rest of the riders and win by three bike lengths.  Fabian Puerta Zapata of Colombia won the silver medal and Tomas Babek of the Czech Republic took the bronze.  Awang was the Keirin bronze medalist in the last two years, and accounts for five of the six medals Malaysia has won at track world championships. 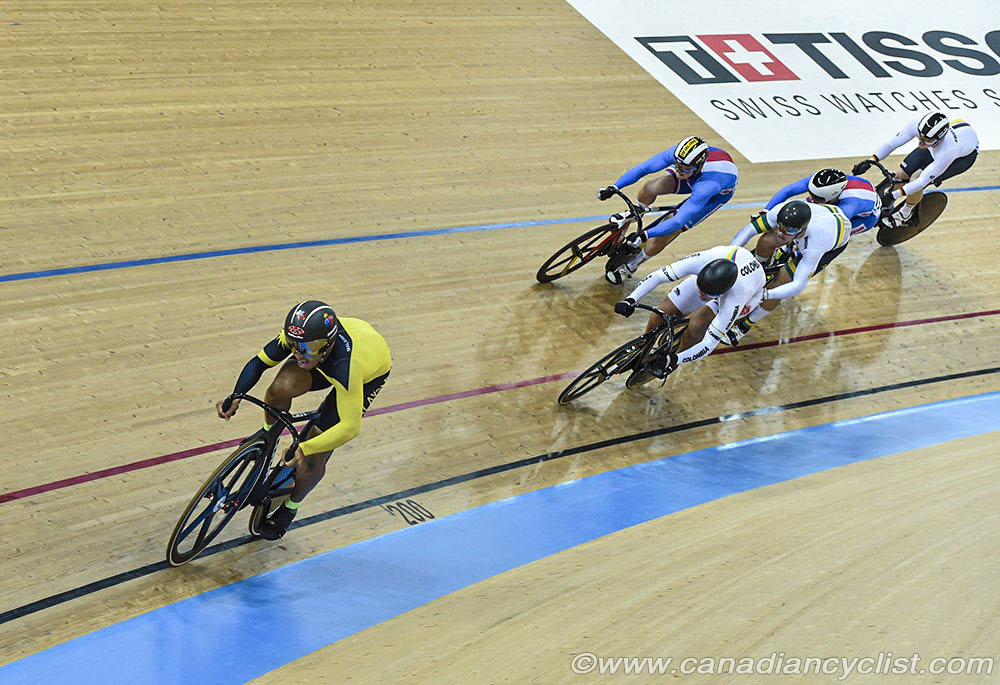 In the Men's Team Pursuit final for gold, Australia raced their usual rivals, New Zealand.  The Australian team, which had come within three-tenths of a second of the world record in an earlier round, took an early lead, but New Zealand fought back, moving into the lead at the three-quarter mark.  Australia put on a surge in the final 1000 metres to finish 2.476 seconds ahead.  Italy took the bronze medal ahead of Great Britain. 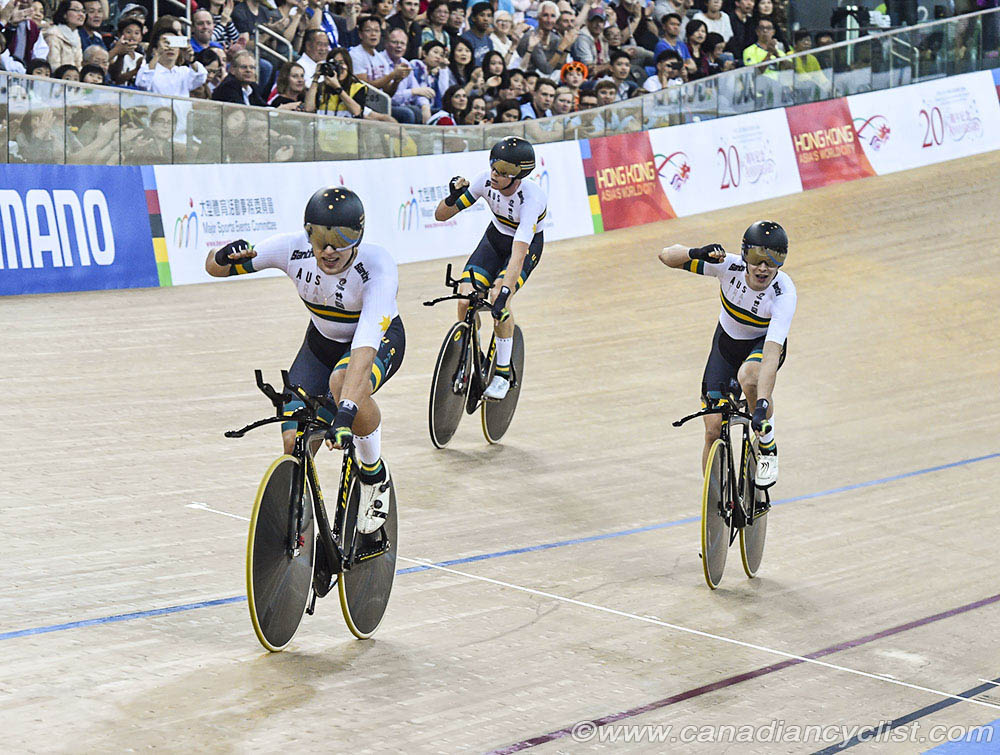 The 15 kilometre Men's Scratch Race saw multiple attacks but the pace was so high that no one could break away until Adrian Teklinski of Poland took a gamble in the final kilometre, attacking during a brief lull in the action.  The hesitation behind allowed him to open up almost a half lap lead before the chase began, and he was able to hold to the finish and win the title.  Lucas Liss of Germany won the bunch sprint behind for silver, with Christopher Latham of Great Britain winning bronze.

Note: Hong Kong is on the other side of the dateline, so 12 hours ahead of Canada ET...