Jasmin Duehring was Canada's top finisher on the final day of the 2017 Track World Championships, in Hong Kong, on Sunday.  Duehring finished sixth in the women's Points Race after briefly leading earlier in the event.  Four world titles were awarded on the final day, with France taking two, and Germany and Great Britain each taking one.  This is the first track world championship since 2012 where Canada has not won a medal in the women's team pursuit.

"It is correct that this is the first time we haven't won a medal at Worlds since 2012*," agreed Jacques Landry, Chief Technical Officer at Cycling Canada .  "We decided to take an approach at the start of this Olympic quad to give riders a bit more liberty to recover from Rio.  Some of them have come not necessarily 100% ready for these Worlds.  We wanted to give them a bit more rest.  We'll need to ramp it up for Tokyo, but there's plenty of time for that and we aren't too worried."  (*note reference was to the Women's Team Pursuit - ed)

"But you also have to look at some of the performances from the sprinters - they have put down some good personal bests here, including the Women's Team Sprint in fifth; our best ever result for that event.  So we are showing progress.  Some of this was anticipated, but we also can't ignore the fact that we had some bad luck with crashes in the Men's Team Pursuit and Steph Roorda going down in the Omnium.  Those are things that we can't really control; it's unfortunate, but it happens." 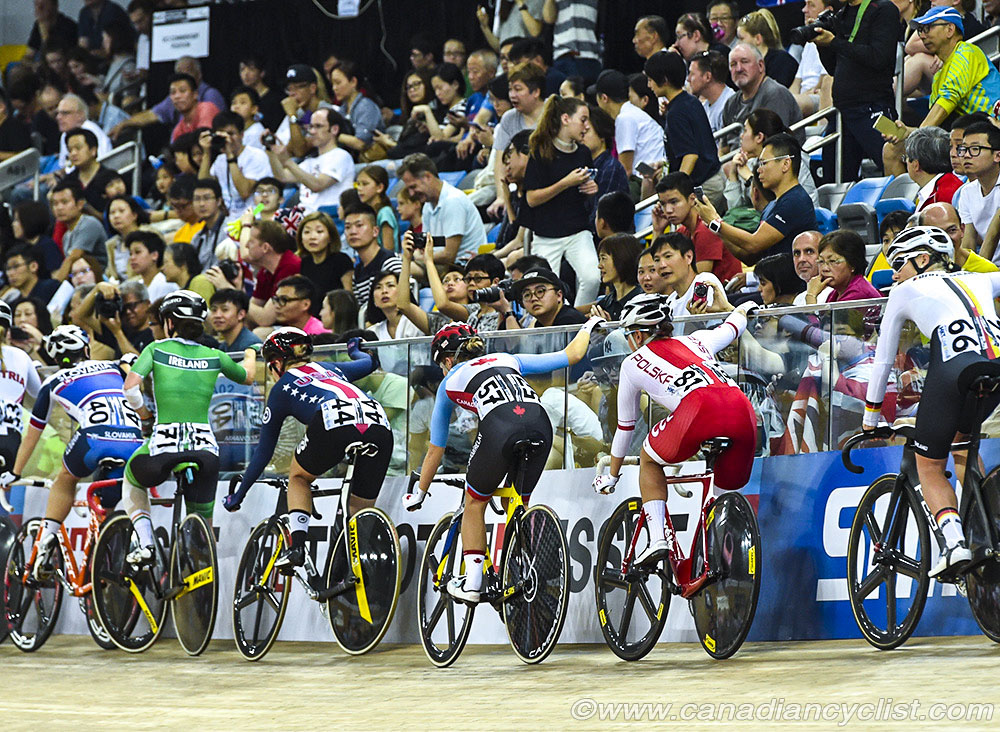 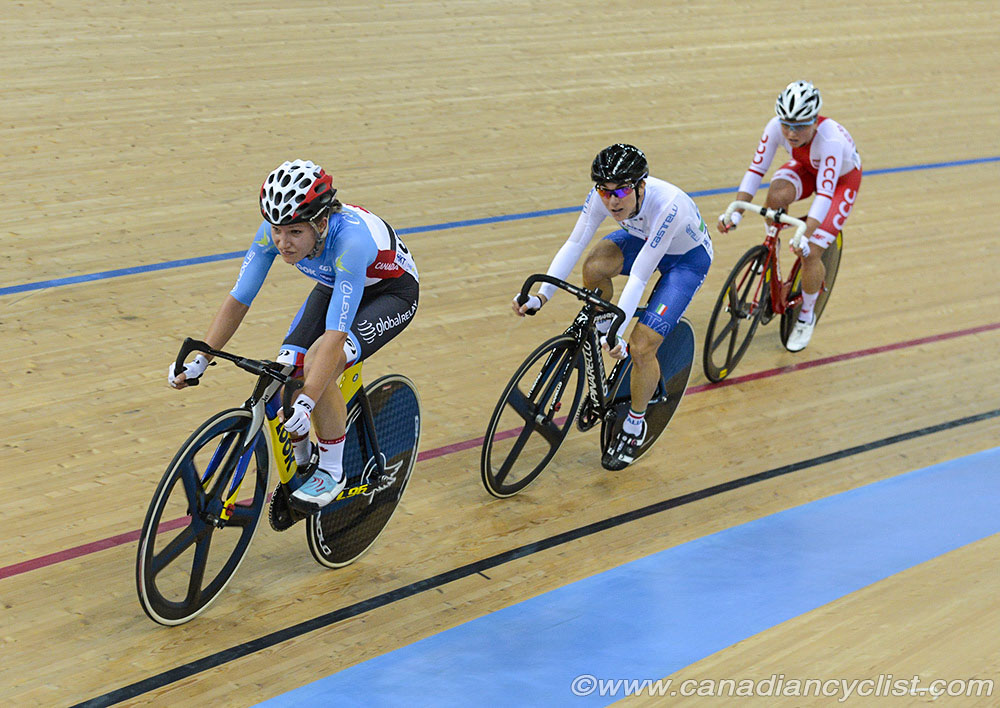 Duehring scored points in the first 40 laps of the Point Race that put her in the lead, however, she missed the move that saw the eventual top two finishers - Elinor Barker of Great Britain and Sarah Hammer of the United States - take a lap on the field.  Duehring continue to ride aggressively, but fell to sixth in the final standings after 100 laps of racing.

"I came here to win, I'm not going to pretend otherwise," said Duehring.  "I think I was leading the race at one point, but it was a really hard race and I think I just blew up a little bit.  I missed the group of two riders that took a lap on the field, and that was the race right there.  I'm definitely disappointed, but I'm trying to keep perspective; coming off two Olympic cycles without a break, my goal was to take a step back, get married and go back to school and finish my degree."


Barker won her second medal of the championships in the women's Points Race after battling with Hammer.  Both riders took two laps on the field, with Barker taking points in five intermediate sprints to win with 59 points, 8 more than Hammer.  Kirsten Wild of the Netherlands won the bronze medal.

The final women's competition was the Keirin, and Germany's Kristina Vogel won her second title of these championships and the ninth of her career.  Vogel was clearly the strongest in the race, moving to the front at the start of the last lap and holding off Martha Bayona of Colombia and Nicky Degrendele of Belgium.  Canada's Kate O'Brien failed to advance out of the first round of the Keirin. 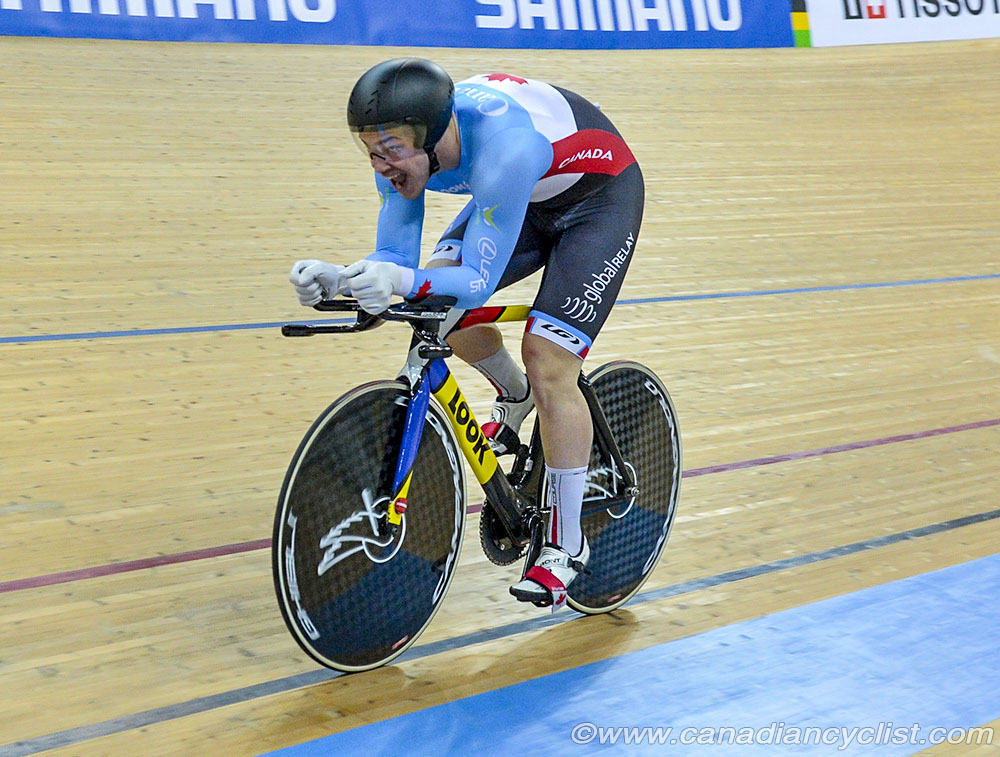 World record holder Francois Pervis won France's first title of the day and second of the championships in the Kilo.  It is Pervis' fourth title in the event and he won convincingly, finishing 0.334 seconds ahead of two riders who tied for silver to the thousandth of a second.  Both Tomas Babek of the Czech Republic and Quentin Lafargue of France were awarded second place. Canada's Stefan Ritter finished 13th in the event.  Ritter, racing in his first world championships after moving up from the Junior ranks, set a personal best time with his ride.


The world championships concluded with the men's Madison, which quickly became a battle between France and Australia.  Australia took the lead after 50 laps, but France remained close, and the two teams were only three points apart at the 100 lap halfway mark.  Australia still led going into the final 50 laps, but France then scored in six consecutive intermediate sprints, while Australia could only manage three.  At the end of 200 laps of racing, France took the title with 45 points, four more than Australia.  Belgium took the bronze, another nine points in arrears.