"The Ultimate Singletrack Experience", is set to launch its third year this Sunday June 28 to July 4, 2009 and will host over 400 riders from around the world. This year’s edition of the 7-day mountain bike adventure offers a revised course featuring a North Vancouver start–taking in the legendary North Shore trails–and two new stages to cement the BC Bike Race as the greatest singletrack adventure on the planet.

BC Bike Race has always aimed to exceed expectations and to be 'the best mountain bike race in the world'. Race organizers believe that their ongoing commitment to the best course possible will create the best experience possible. The BC Bike Race team shares the same values and the same goal: to provide an awesome mountain bike experience like no other. Only at the BC Bike Race are participants set up day-after-day to ride world-famous singletrack featured in countless mountain bike media sources.

The lure of riding the best of BC's world-class mountain bike trails has already attracted a broad range of competitors, from weekend warriors to some of the world's finest mountain bike racers, World Champions and Olympians. This year’s competitor list is a who’s who of mountain bike talent:

This Sunday a seven-day odyssey will begin for the 400 intrepid adventurers. Stay tuned for all the action and watch some of the notables stretch their legs and their mountain bike skills as they undertake the BC Bike Race. 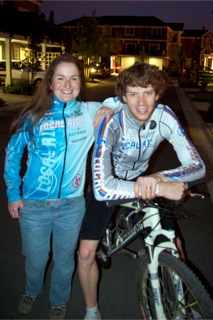 “Ever since this race first started three years ago, I’ve been itching to do it,” said Walter, 29, an elite-level cross country mountain bike racer. “Everyone I talk to says it’s such a phenomenal experience, and I can’t wait to get a taste of some of best trails and scenery in the world.”

Devantier, 29, has completed the race twice in the open men’s category with team mate Barry Lyster, Local Ride Racing Team Manager and owner of Local Ride Bike Shop. This year, Lyster will be working behind the scenes, supporting the duo of Walter and Devantier: “Sandra [Walter] and Steve [Devantier] have the potential to win this race,” said Lyster, “and I want to do everything I can to help them reach their goal. I’m really looking forward to my supporting role.”

The BC Bike Race starts in North Vancouver on Sunday, July 28. Over the seven days, competitors will ride some of the best mountain biking terrain in the world, on the North Shore, Vancouver Island, the Sunshine Coast, in Squamish and Whistler. Stages range in distance from 30 to 70km per day and feature the tight, technical trails B.C. is famous for.

“I’m super excited about BC Bike Race this year,” said Devantier. “I think Sandra and I will make a great mixed team. We’ve ridden together a lot, which will really pay off out there on the trails.”

The race will see riders of all ages from all over the world participating, from Olympians to weekend warriors. BC Bike Race organizers are not looking to create the toughest mountain bike stage race in the world; instead, they're creating a lasting experience for competitors. When you combine in one race the most spectacular scenery and vacation destinations in Canada with the most amazing singletrack trails in the world, you get an intoxicating mixture guaranteed to wow any mountain bike enthusiast.

There's no doubt that multi-day stage races are tough. They challenge competitors to push beyond perceived personal limitations and to lean on each other when the going gets rough. It's the innate human desire to challenge and overcome that's been driving the rapid increase in popularity of epic mountain biking events in recent years. BC Bike Race is not looking to be the toughest race out there... just the best.