We’re too busy building and riding the most stealth bike parts on the planet to really know, or care what colour Paris Hilton is rocking this year. We don’t know if pink is the new black, or if black is the new black; we just build what looks sick. What we do know is that pink is the new “So Crazy Rare There are Only 8 Like It in the World” when it comes to Race Face cranks. 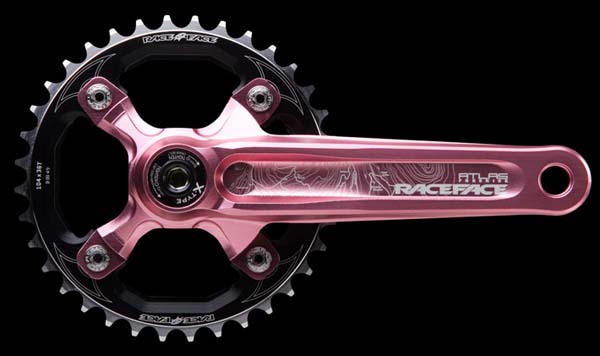 We had the mad scientists over at Altech Anodizing cook up a few sets of pink Atlas FR cranks this summer and when they turned up at the office, they were so sweet we literally had staff wrestling to get their hands on one. Even the boss got in on the action—he didn’t need to, mind you, but he likes that kind of stuff--he’s a hockey player, eh?

The marketing team has a few ninja tricks up our sleeves and managed to sneak off with a couple of sets of these Starfish Pink Atlas FR cranks amidst all of the madness. We need to do something with these bad boys quick so we will be selling the two sets in the auctions we’re hosting this summer to raise money for Dirt Series mountain bike camp scholarships.

As if the chance to own one of only 8 sets of Pink Race Face cranks wasn’t enough to get you checking the limit on your credit card and heading over to eBay to bid, we’re also throwing in the chance to get the back pocket of the left crank arm customized with a laser-etched message of your choice. As always, we program only PG rated messages on the Race Face network, so keep your laser etchings clean, folks!

"A Scottish winner of the June auction, where a pair of Rum Red cranks faced off against our Orange Whip Cranks, was so stoked to receive his custom crank that he has sworn off the competition,” said Race Face Soft Goods Marketing & Design Manager, Wendy Tewnion. “He plans to visit Race Face Canada this summer, where he and his mates will tour the machining facility where his custom crank was born. The June auction was so successful that the proceeds will send three lucky female riders to Dirt Series camps where they will learn new skills—XC and DH, beginner to advanced, from the best mountain bike coaches in the biz."

Bidding on the Starfish Pink cranks opens July 21st and closes July 28th. So figure out what you want your custom cranks to say and then go bid on a pair. Who knows? you might find yourself bidding against one of the Race Face employees who came up short in the Pink Crank Rumble of 2009.