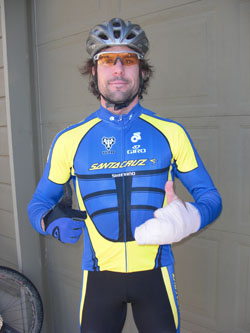 Chris Sheppard will have to miss this weekend's national championships as well the upcoming USGP and Trophy series races.  The Santa Cruz/Shimano/ WTB rider was putting the final touches to his form when he crashed descending a section of single track.

X-rays confirmed the fracture of the proximal bone in his ring finger which has left him in a soft cast for one month.  Sheppard will not risk re-injury, due to the prospect of surgery if a mishap were to occur.

"My entire 'cross season revolved around the October races", noted Sheppard who recently notched an eighth place after chasing from the 30's at the UCI Rad Racing GP.  Chris added,  "Santa Cruz Bicycles stepped up to continue what has really been a fun, successful season.  Yes, missing nationals while being fit hurts, but I am more disappointed with letting down my sponsors."

Sheppard hopes to make a return to cyclocross action at the Boulder Cup UCI weekend.