The Pan American Mountain Bike Championship is a strange beast.  On the one hand, it offers some of the most UCI points of any event on the world calendar, as the continental championships.  However, it also brings together a broad range to talent levels - from top pros like American Todd Wells of the Specialized squad and Canada's Max Plaxton (Sho-Air Specialized), to riders from smaller countries that have very little in the way of elite racing.  It also tends to be held in Central and South American nations that are not used to the level of detail and preparation that a major championship is normally expected to provide.

This year, the Pan Am Mountain Bike Championship is being held in the national park on the outskirts of Guatemala City, with nearly 400 athletes from the western hemisphere here to compete in 4-Cross, Downhill and Cross-country disciplines over the course of three days (Friday, April 9th to Sunday, April 11th).

Racing got underway with the Team Relay, an event that both the powerhouse nations - Canada and the United States - did not compete in.  Colombia took first Pan Am title honours, ahead of Mexico and Argentina.  Masters age category cross-country racing took place next, followed by the first Elite events in the 4-Cross.

The Guatemalan organizers put together a very nice, fast course, with multiple passing options.  Fastest in qualifying for the men was Antonio Leiva (Chile), with team mates Enrique Genova and Mauricio Acuña also highly ranked.  All three made the final, but it was Ecuador's Mario Jarrin Molina who won the title with a very strong start that put him firmly into the lead by the first corner.

All three American men made the cut to go onto the four rider heats - Brian Buell, Shawn Neer and Chris Van Dine.  Buell and Neer both went down in crashes in quarter and semi final action, with Neer joining Van Dine in a bizarre consolation final.  Supposedly joining the two Americans in the 5th to 8th race was local Guatemalan rider Hugo Martinez, however, Martinez had been disqualified in the semi final after cutting across in front of the other riders out of the gate.

Neither Martinez nor the Guatemalan spectators took this well, with a crowd of them occupying the first corner on the course and refusing to budge, delaying racing by at least 15-20 minutes as UCI delegate Simon Burney tried to persuade them to leave the course.  It took the American riders rolling down the course (with no starting gate having been dropped), and beckoning Martinez to join them, before the course was cleared and the final could be raced.

Did anyone take fifth?  No one seems sure at this point.

In the women's five rider race, there was only one real contender - Luana Oliveira of Brazil.  Oliveira was clearly a level or two above the other riders, slicing through corners and jumping double bumps that the others rolled over. Katherine Rodriguez (Venezuela) took silver and Erika Quintana (Ecuador) bronze.

Saturday, the Downhillers race, with American Katie Holden calling the course "extremely fun and challenging".  The upper half is fairly open, with some jumps, but the lower half is rock-filled and loose.  "There's lots of chances to make mistakes there," commented Holden.  Canada has one rider in the Downhill - Rob Fraser.

Sunday, the Pan Am Championships conclude with the U23 and Elite Cross-country races for women and men.  All categories will begin with a 600 metre start loop on cobblestones before diving into the 6.5 kilometre course.  The women (U23 and Elite) will do four laps, the U23 men five and the Elite men six.  (See map below)

The course offers a mixture of hardpack doubletrack and singletrack - fast, dusty and quite technical in places, according to Max Plaxton.  "It's a fun course, a challenging course.  There's a bit of everything, so you need to be a good all around rider.  In some of the singletrack, it's so dusty that if you get out of the groove, it's easy to crash, and a lot of people have been in training."

Todd Wells echoes Plaxton's remarks, commenting "they did a really good job on building this course, and we are going to see some good racing."

Two other factors may come into play during the races - altitude and heat.  The race takes place at 1500 metres (5000 feet), which may impact some riders, while the heat has been hovering close to 30 Celcius.  From the start line, the riders do an initial stepped climb, then a sharp descent before tackling the major climb of over one kilometre.  From the top, it is mostly downhill to the finish, with some treacherous dusty corners where riders can slide out.

On the men's side, the U.S. has a very strong group, with Wells, Sam Schultz, Jeremy Horgan-Kobelski and Michael Broderick.  Canada also has podium potential with Plaxton, Derek Zandstra, Andrew Watson and Raphaël Gagne.  Another nation to watch will be Costa Rica with Paolo Montoya, Manny Prado and multiple La Ruta winner 'Lico' Ramirez.  One rider missing is Colombian star Leonardo Paez, who just withdrew due to an earlier hand injury.  Top U.S. rider Adam Craig is also missing due to injury and top Canadian Geoff Kabush decided to skip the Pan Ams to concentrate on preparing for the World Cup season.

On the women's side, this looks to be a U.S. - Canada battle, with the American team entering Willow Koerber, Mary McConneloug, Heather Irmiger and Katie Compton.  Canada's top ranked riders Marie-Helene Premont, Catharine Pendrel and Emily Batty have all skipped the event to focus on the World Cup, but Canada still has Amanda Sin and Mical Dyck in the Elite race, with Mikaela Kofman and Rebecca Beaumont in the U23 category.  Kofman has to be considered a strong favourite to be on the podium in the U23 race. 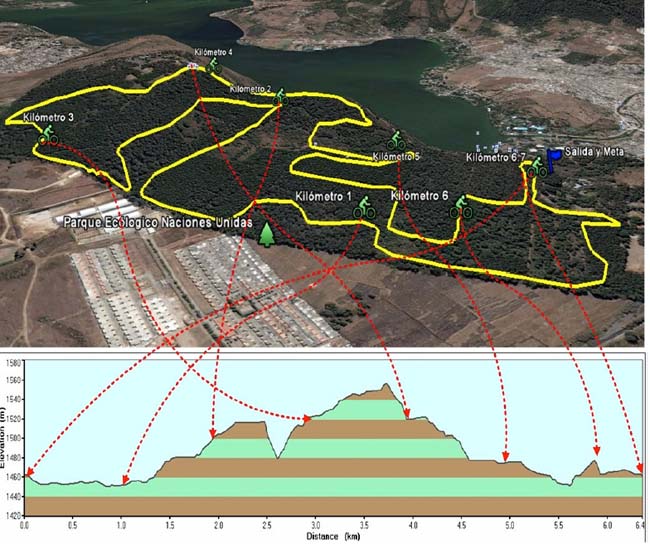