On Friday, December 2nd, the Wheels of Bloor / Graywood Developments cycling team introduced the 2012 roster with an event at the Wheels of Bloor Bike shop on 2007 Bloor Street West in Toronto. Along with all ten riders back from last year's team, four new riders have joined the squad bringing with them a wealth of experience, speed, strength, positivity and good humour. 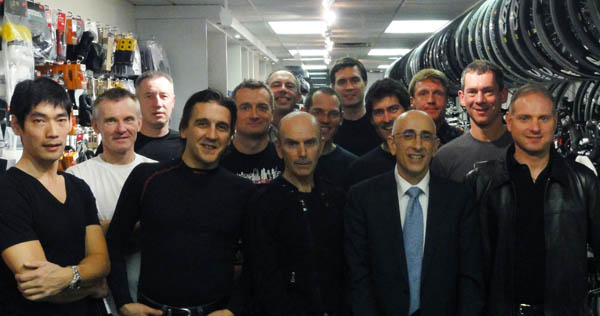 All of the four riders joining the team have years / decades of accomplishments, including the following, achieved over the past few years:

Rob D'Amico, the current Canadian National criterium Champion (Master's B category) joins the team after riding with Z-team over the past few seasons.

Paolo Eugeni also comes over from the Z-Team after a 20011 campaign highlighted with a second consecutive victory at the Springbank Road Race and a win at the Ciociara criterium.

Chris Firek joins WOB / Graywood Developments after riding for Gears in 2011, where he quick moved up to the top level of Masters racing, including a second place finish at the KW Classic Road Race, after having taken several years away from racing.

For more photos from the event:
www.wheelsofbloorracing.com/2011/12/wheels-of-bloor-graywood-developments.html