Camp participant Sarah Rasmussen has written the following report on the Women's Team Pursuit camp being held in Los Angeles.

After the arrival of all the participants [in Los Angeles], the campers headed to the Velodrome to get used to the track for a bit.  Some of the more veteran riders took great ease in getting used to the track, however, many of the Ontario girls were shocked at the difference between Forest City Velodrome and the Home Depot Center Track.  After a bit of practice, by the end of the two hour evening session the improvement was substantial.  The coach, Tanya Dubnicoff, described the improvement as “night and day”.  All the girls became more eager to continue training throughout the week. 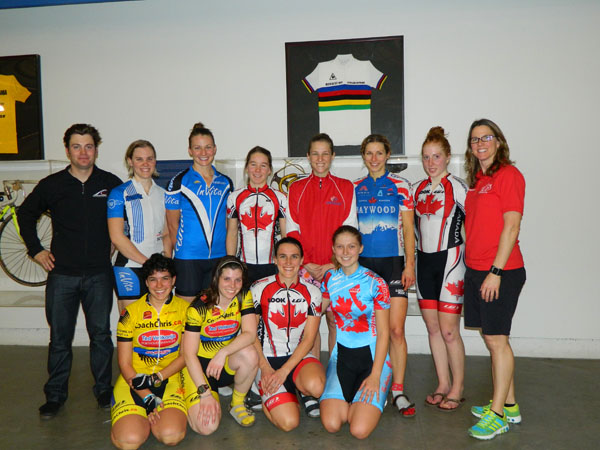 Tuesday morning provided another day of great training.  The development encouraged the girls to warm-up properly with what has become a daily routine of 40 laps, two standing starts and, if you needed to, a rolling three lap start was recommended.  One of the most exciting opportunities for the girls at the camp was that they had the opportunity to train with the Canadian Women’s National Team Pursuit.

Everyone took full advantage of asking any questions to Laura Brown, Tara Whitten, and Stephanie Roorda.  After completing 2 x 1km individual pursuit efforts, the girls began to understand the amount of effort and dedication that would be required if they wished to pursue track cycling.  Tara provided great advice to the girls to bring rollers to races and training sessions, so that you can spin out the lactic acid between intervals.  Many of the girls were quite dead at this point and were shocked to hear Tara say that she would be continuing her training by completing 7 x 1km individual pursuit efforts.  The girls then imagined the amount of suffering her workout would entail.

Alison Beveridge described how she enjoyed seeing where she was at in comparison to previous years at the indoor 250m track.  We continued practicing team pursuit by practicing exchanges and getting used to the banking.  Once we had a bit of practice we began to feel more and more confident.  My favorite quote of the day came after asking one of my teammates of the camp “How much longer?” and Laura Brown piped up from the inside of the track “It’s never done”.  After pondering this statement in my head I realized it is true whether you are on the track or off the track; everything you do can be either beneficial or detrimental to your training.

Wednesday was quite a challenging day, with two practices at 6-8am and 7-9pm.  The morning workout consisted of 3km standing individual pursuit.  If we hadn’t tasted blood from the day before in 2 x 1km, you definitely were by the end of the 3km effort.  Steph Bester enjoyed “practicing pacing under a full-size track under the supervision of Tanya”.  We continued to develop our abilities in the team pursuit with practicing starts and finishes.  Stephanie Morrison (Former Rower), who started training on the track four months ago said “our riders followed Tanya’s instructions extremely well so by the end of the session we were executing the pursuits consistently and smoothly. 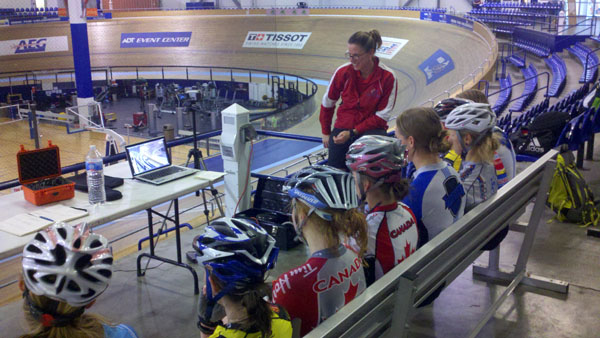 Group watching a video of their ride

I love the orchestration that is involved in the team pursuit.  After spending the afternoon relaxing at Redondo Beach, having naps, or going for easy spins we went back to the track for a great workout with local California riders.   The girls greatly appreciated Coach Tim Roach allowing us to train with his group.  The evening training session consisted of 8 x 20 lap intervals which totaled an hour of training.  At the end of every 20 laps all riders struggled to sprint to the finish in the group.  Audrey LaBrie (1st year Elite) described that despite how challenging the workout was “the racing was a lot of fun”.

A unanimous consensus among all the athletes was that they have thoroughly enjoyed the camp thus far.  Emily McKenzie Picot described how she felt the camp has been a “really good experience where we have had a chance to work with a bunch of other girls who we would not have the opportunity to at our local tracks”. She added in “Oh, and I like that track too”.  This idea was reiterated by Jenny Lehmann who said “Awesome training with some unfamiliar faces on an unfamiliar track”.

All the girls would like to thank the wonderful coaches they had this week - Tanya Dubnicoff, Phil and Johnny.