Tory Nyhaug of Coquitlam, BC, won his sixth Canadian title in the Elite category, while Amelia Walsh of Ayr, Ontario, took her first in Elite women, as both riders completed a perfect weekend on the St-Albert BMX track at the 2013 Canadian BMX Championships.

Nyhaug rode a clean race in the main event, staying outside of trouble from the start to finish. With the victory, the young BMX star now shows a perfect record of six Canadian titles in as many races (Time Trial and Mains) since joining the elite category three years ago.

"I couldn't be happier [to get the sixth title]. I did what I wanted to do. Got some clean laps and got a really good start in the main, probably the best lap of the week for me," said Nyhaug, of his accomplishment.

"I think the only pressure I feel is the pressure I put on myself to perform. Obviously I have some expectations on myself. I always love to come back to Canada and race, an opportunity I don't get too often. I didn't really think of the titles I've won the past - I just took it one lap at a time."

"The sport is definitely growing in Canada. Since the Olympics, the sport has grown significantly worldwide. Watching the kids here, there is a lot of talent. I hope these kids stay inspired to stick with the sport."

James Palmer crossed the line in second place of the action-packed final, while Connor McCormack took the third spot.

In the women's race, Amelia Walsh rode away with her career first BMX title, after winning the time trial title last night on the same track in St-Albert. The two-time defending champion Sabrina Millman did not race, as she was nursing a concussion she suffered on Thursday while training.

"I am pretty happy. Like I said yesterday, I haven't had a Canadian Championships title prior to coming here, winning both here makes me pretty happy. I want to keep moving forward with my racing, and become Top-20 in the world, hopefully next year," said Walsh. "I wanted to be aggressive down the first straight, and keep my line in the corners."

"It was kind of disappointing to hear about Sabrina's crash [in training]. I look forward to seeing her back here next year," continued Walsh.

Chelsea Kingston followed behind Walsh for the second place, while Rosemary Adams rode to third place.

In the Junior category, it was once more an affair of the McAdam twin sisters, with Morgan McAdam taking the title and Elaine McAdam crossing in second place just behind her sister. Michelle Berti was third. The Junior men's title was won by Jared Ennis, with Mackay Leslie and Braden Wood crossing the line in second and third places.

Sunday will feature races of the BMX Canada Cup Series, plus some regional races. 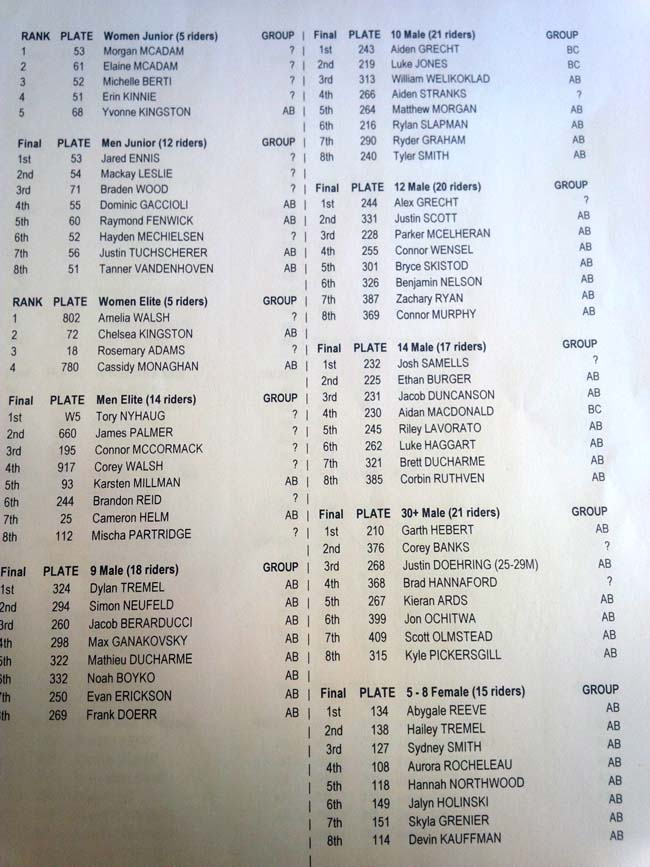 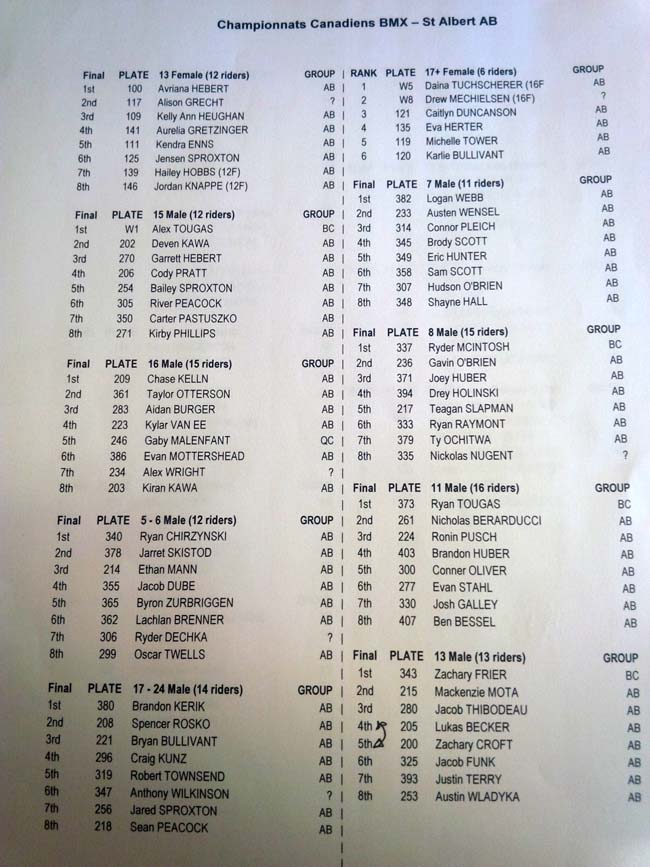