Team Canada came within 11 seconds of grabbing a medal on the opening day of competition at the 2013 Mountain Bike and Trials World Championships in the Team Relay cross-country event.  Italy pulled off the rare feat of repeating as world champions, with France taking silver, less than a bike length behind, and Germany overtaking Canada in the final 500 metres for bronze.  All three medal-winning teams finished in the same positions as 2012. 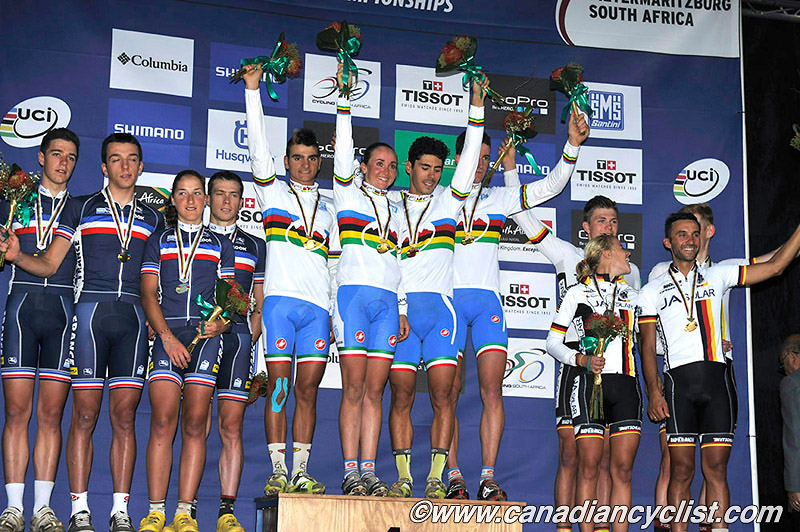 Italy took an early lead with their Elite man Marco Fontana opening a 19 second gap on Austria's Alexander Gehbauer.  Canada opened with Junior Peter Disera, who posted the fastest lap of the day for Junior men.  The Italians continued to lead at the completion of their second lap with Junior man Gioele Bertolini, while Canada had jumped from seventh to second after a very fast lap by Elite man Derek Zandstra. 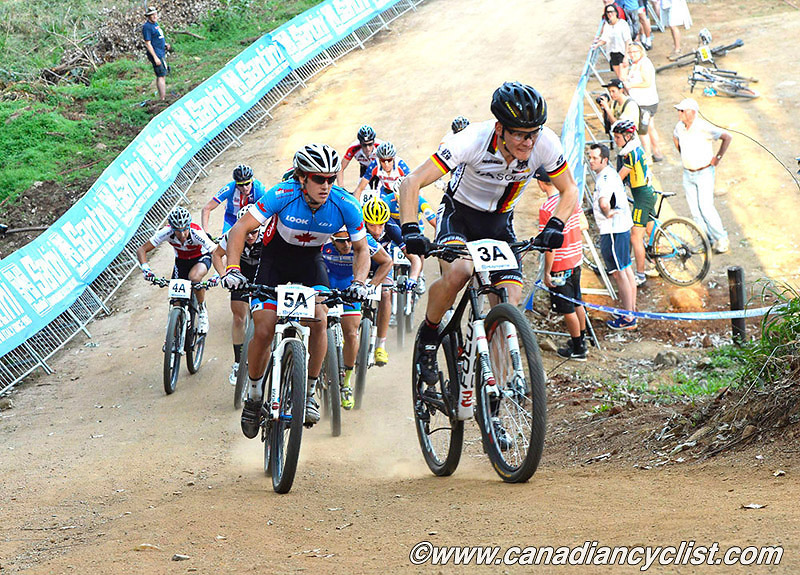 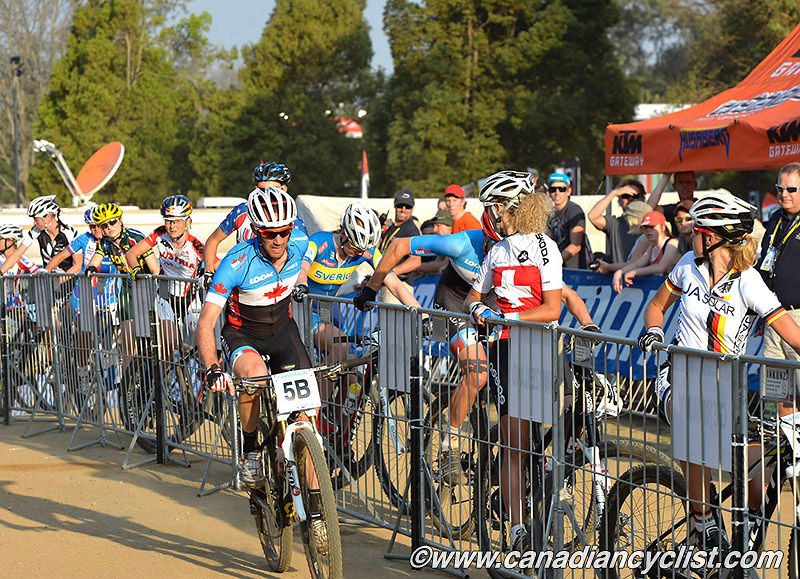 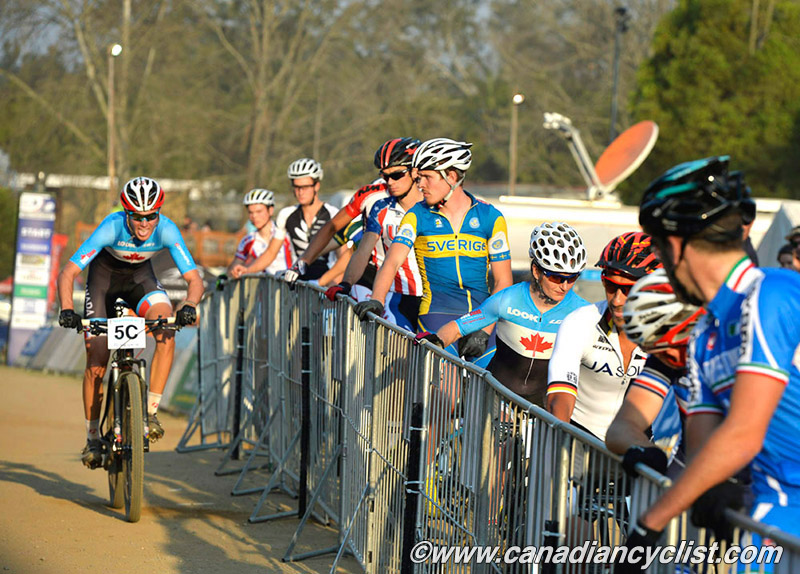 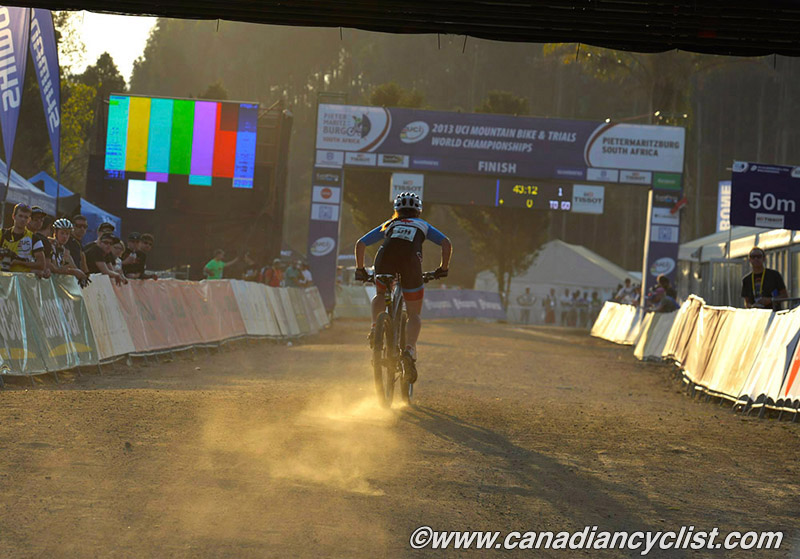 Sandra Walter heads out onto the last lap

The Canadians moved into the lead after the third lap, when another strong performance from Under-23 rider Mitch Bailey put them over a minute ahead of Italy, with France just behind the Italians and Germany over two minutes in arrears.

Canada looked to be in a strong position to medal, however, Canada had saved their Elite woman, Sandra Walter, for the final lap, and she was gradually reeled in by the men chasing her, with Gerhard Kerschbaumer of Italy and then Maxime Marotte of France catching her in the first half lap.  Third place was still up for grabs until the final technical Corkscrew section, when Manuel Fumic of Germany finally caught Walter, to take the bronze medal by 11 seconds. 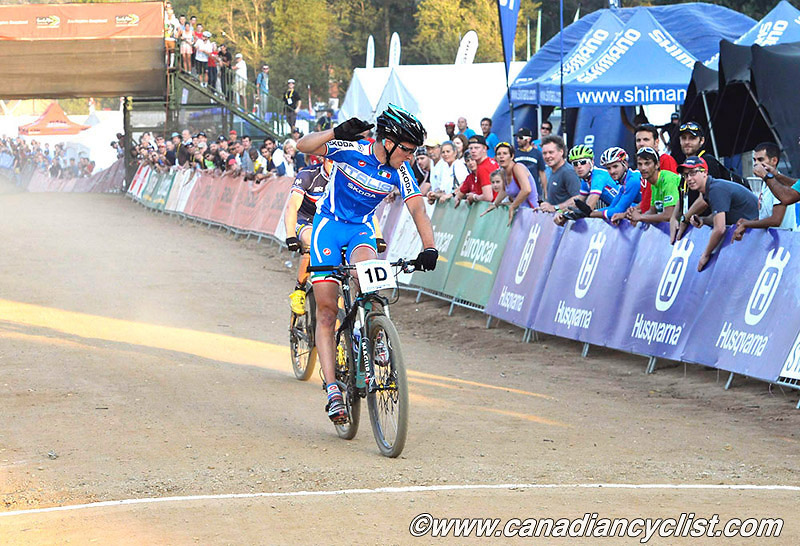 The Czech Republic, which had saved their strongest rider, Olympic champion Jaroslav Kulhavy, for last, had a disaster when Kulhavy snapped his chain barely ten metres into his lap.

Marco Fontana explained that the Italian team stayed with a tried and true plan, "Our team strategy was to start with the elite rider, which was me.  This strategy has been working so far, so why change it? I think the start is pretty important. You have to lead the whole group and a lot of things can happen. It was a good lap for me, and the guys did a very good job to keep the advantage. It was a close finish.  When I saw Kerschbaumer stop pedalling and nearly get passed at the end, I almost had a heart attack. I'm happy with how the team worked."

Italian woman rider Eva Lechner commented, "Today was my 10th team relay world championship. I'm happy that we could win again.  We won two European champs and two world championships in the last two years.  It shows that we are a strong team."

Walter, who rode very strongly against some of the top men in the world, commented afterwards "I told Dan [Proulx, national coach] that I usually ride the best when I have men chasing me.  That's what I used to motivate me."

Note:  We have interviews with Walter, Zandstra and Bailey HERE.

The individual cross-country action starts tomorrow with the Junior women and Junior men.