The Elite women and men closed out the cross-country competition on Saturday.  Both defending champions mounted a successful defense of their titles, with Julie Bresset giving France its first world title of the these championships, while Nino Schurter put Switzerland alone on top of the standings with its third title.

The women's field had great depth, and turned into a battle right to the finish line, with Bresset beating 2010 champion Maja Wloszczowska of Poland by a scant five seconds as both riders sprinted up the finishing straight.

Bresset and Wloszczowska attacked hard on the opening lap, and were joined at the front by Eva Lechner (Italy), World Cup leader Tanja Zakelj (Slovenia), Alexandra Engen (Sweden) and Katerina Nash (Czech Republic).  However, a lap later they had shed everyone but Zakelj, and she was gone by the halfway mark after crashing in the Corkscrew descent.  Lechner had crashed also earlier.

From that point on it was just the two leaders, and neither could drop the other.  It wasn't until the Tree House rock garden that Bresset finally managed to open a few metres on her rival, and she was able to maintain it to the finish, despite a furious chase by Wloszczowska that had Bresset looking over her shoulder all the way to the line. 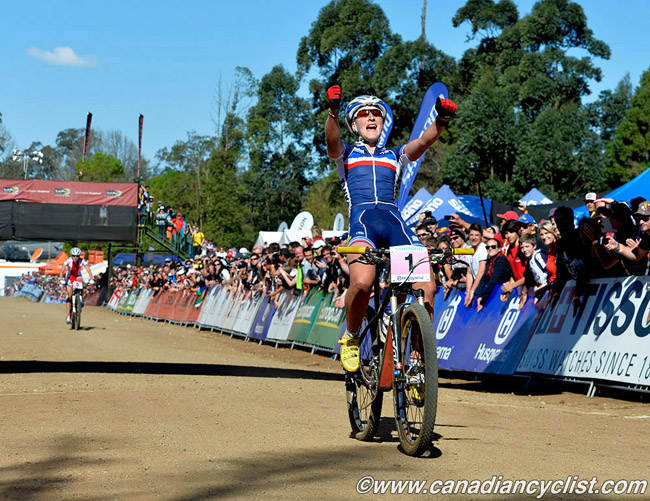 Esther Süss, the remarkable 39 year older Swiss rider, rode her way up through the field from 13th at the end of lap one to the bronze medal position by the finish.

“I tried to keep ahead," explained Bresset, "especially through the technical sections, and then on the last lap I got into the last rock garden first, and from there it is really fast to the finish and I had good speed, so I was very happy."

Bresset is returning to top form after an early season crash resulted in a broken clavicle and put her out of World Cup overall contention.  "I'm very happy to have been able to make my come back and I was hoping for a top five, but I got first and it is great."

Emily Batty was the top Canadian finisher in 17th, just ahead of Catharine Pendrel in 20th.  "I'm still battling illness and a chest infection," explained Batty.  "I had great legs but was really held back by my lungs.  You would think I'd be used to racing sick by now, as it's been a constant uphill battle all year long.  I'm not happy with today, but I just made the most of it."

Pendrel started strong, riding in the top-10 on the first lap, before washing out in a corner and having to chase back to the front, only to crash hard in the Tree House rock garden.

"I was super happy with how the start went," commented Pendrel.  "I started on the third row and by the Amphitheatre I was already in the top-10.  Then coming into a turn I washed out in a rut and went down, losing a couple of positions, and rhythm and momentum.  I got going again, had a good second lap, and then crashed in the Tree House, and that was a harder crash, and it took me a while to get going again.  Basically, after that I never really got going again."

Sandra Walter and Amanda Sin were both caught in a crash at the start and chased all race, with Walter also suffering a mechanical.  Mikaela Kofman, in her first World championships as a senior, finished a repectable 23rd.

The men's seven lap race was expected to be a battle between Schurter and his perennial rival, four-time world champion Julien Absalon of France.  However, Absalon crashed hard in training earlier in the week, and it quickly became clear that the Frenchman would not be a factor at the lead of the race, eventually finishing sixth and collapsing on the finish line.

This left Schurter alone at the front, and he quickly opened ten seconds over 2010 world champion Jose Hermida of Spain on the first lap.  Hermida chased alone for the first half of the race, losing a few seconds on Schurter every lap, until he was joined by Germany's Manuel Fumic on lap five.  The duo chased together for a lap before the German rider dropped the Spaniard to take sole possession of second place.

By the start of the final lap Schurter had a 22 second gap over Fumic, but the German put on a strong surge on the last lap to pull to within seven seconds at the finish, taking the first ever Elite men's world championship cross-country medal for Germany, while Hermida held on for bronze. 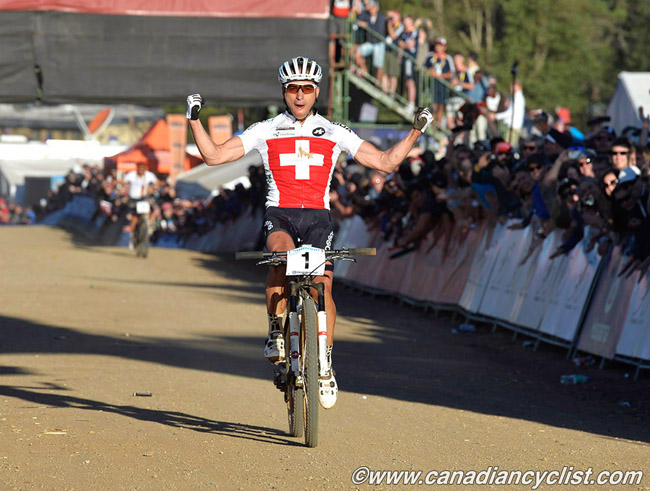 "My goal was to start with a really fast first lap," revealed Schurter.  "I was expecting a big battle with Julien, but he was not able to go with me, so by the first half lap I had a gap.  After that I was able to ride my own pace and not go into the red zone, so it was perfect.  I know I can do well on this course, and I had a good feeling all week, so I came into the race with confidence."

Geoff Kabush was the top Canadian, finishing in a disappointing 25th.

"It was a battle out there the whole day," said Kabush.  "A really high speed course, really physical.  I came into it feeling I had a chance, fought as hard as I could, but 25th ... not exactly excited about it.  I had a near death experience at the start, when a guy laid himself out flat in front of me, and I had to ride over a couple of other bodies and bikes.  Slotted in around 20th, but the speed was high just wasn't able to move up."