The day after the national cyclo-cross championships, riders reassembled for the UCI sanctioned Hansen Industries B.C. Grand Prix of Cyclo-cross, also know as the 'Nationals Revenge'.  It was a chance for the new national champions to show off their maple leaf jerseys, and an opportunity for those who came up short a day earlier to try their luck again.

There was no such luck to be had on this Sunday, as both Catharine Pendrel (Luna) and Geoff Kabush (Scott-3Rox) were even more dominant than they had been in the championship races. 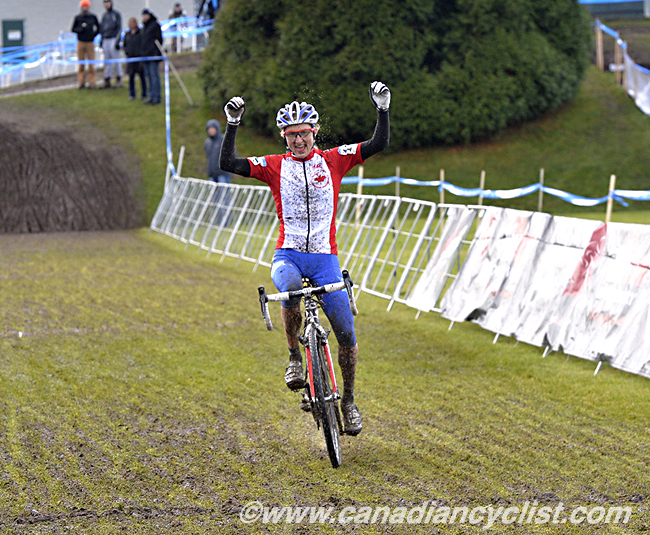 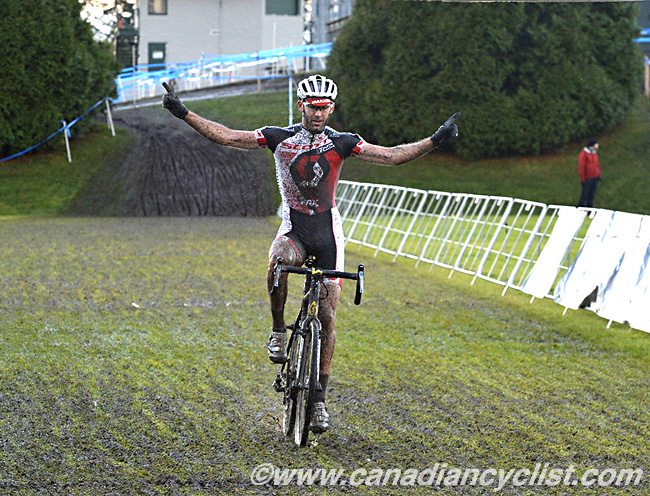 The rain that had turned the course into a soggy mess a day earlier backed off overnight and a strong wind picked up to start drying out the circuit, which was essentially the same as a before.  This weather change was expected to turn the muddy sections into a sticky consistency, possibly improving traction, but there was enough standing water oozing up through the ground to keep everything extremely slippery.  In fact, riders were unable to ride many sections that were ridable the day before, and the circuit favoured running more than powering through the short climbs and long sand pits.

Wendy Simms (Kona), third in the Nationals race, jumped out to the lead in the women's race at the start, with Pendrel chasing hard through the first half lap to catch her.  When Pendrel made the catch, Simms' dismount/mounting and running skills stood her well, and the national champion had difficulty shaking her rival.  Sandra Walter (Liv/Giant) moved into third, followed by Nationals silver medalist Mical Dyck (Pro City Racing/VAC) and Natasha Elliott (Rare Vos Racing).

Pendrel and Simms were yo-yoing at the front, with Pendrel opening gaps on straight power sections, and Simms pulling her back in the tight, running sections.  Finally, with two laps to go Pendrel opened a small gap that she could maintain, increasing it to 15 seconds at the start of the last lap and pulling away as Simms began to fade, to win by 37 seconds.

Dyck ran into mechanical problems when the mud and sand gummed up her chain, forcing her to run nearly half a lap to the pit, and putting her out of medal contention.  Elliott steadily reeled in Walter, to take over the final podium spot as they started the final lap.

[Note:  We have an interview with Wendy Simms Here]

The men's race saw Mike Garrigan (Van Dessel) make his patented fast start, with Kabush chasing through the first third of the course before making contact.  A crash after the first turn in the middle of the bunch saw half a dozen riders go down, and many more held up, including Nationals bronze medalist Cameron Jette (Scott-3Rox).  Garrigan was running at a disadvantage with only one bike after snapping off the derailleur on his spare the previous day.  His aggressive start proved to be too ambitious and he faded quickly, pulling out at the halfway mark.

At the front, Kabush was untouchable, riding powerfully and making the transition to running smoothly when necessary, even when rain hit briefly mid-race, drenching the riders and the course.  He steadily pulled away from the chase group containing Aaron Schooler (H&R Block), Evan McNeely (Norco Factory) and Michael van den Ham (Cycle-Smart) to take the win.

Schooler and McNeely gradually distanced van den Ham, the Under 23 national champion, and took turns opening gaps on each other.  McNeely would attack and then Schooler, who was riding the technical stuff better than anyone, would bridge back up and open his own gap.  Schooler was the only rider to consistently bunny hop the barricades, and ride some of the short, steep muddy climbs that others (including Kabush) were forced to run.  This proved to be the difference as they started the final lap, enabling Schooler to open a gap that he held to the finish, six seconds ahead of McNeely.

[Note:  We have an interview with Aaron Schooler Here]