This morning, it is with great pride that Louis Garneau and Pierre Dion presented a cheque for $101,223 to the Little Brothers - Friends of the Elderly organization. Thanks to the record participation of the public to the Granfondo Garneau-Cascades presented by Quebecor, the amount raised represents $40,000 more than last year!

For Louis Garneau, organizer of the event, the funds collected are synonymous with both victory and a promise kept: "Last year, I promised that we would surpass ourselves and reach greater objectives, and that's exactly what we did! It was possible thanks to the 3,000 participants of the Granfondo and the help of our valued sponsors. I would like to express a very particular thank you to Pierre Dion, Honorary President of the 2013 edition, for his generosity and indispensable help in making this event a success. I am proud that together, we contributed to improving the life of the elderly suffering from loneliness, while practicing a sport we love."

Louis Garneau Sports and Quebecor are proud to sponsor the sixth edition of the Granfondo Garneau-Quebecor presented by Cascades, which will take place on August 10, 2014. In addition to the cycling portion, a 10 kilometre foot race is added to the event, making even more people move. You can register now at quebecgranfondo.com or by calling (418) 878-2130.

In 2014, we are pleased to count on the participation of Mr. Marcel Bouchard, well-known chronicler of the "Salut, Bonjour! Weekend" show, as Honorary President. "I have accepted to be Honorary President of the Granfondo Garneau-Quebecor firstly because I have a lot of respect for Louis Garneau and what he brings to the world of sports, but also because it is for me a natural association. It only makes sense for me to be associated with an event that makes people move and spend energy. What's more, the cause of the Little Brothers - Friends of the Elderly organization is very noble. More people die from loneliness than from age itself. This is why providing these elderly with a presence, be it just a smile or one conversation each day, helps improve their mental and physical health." 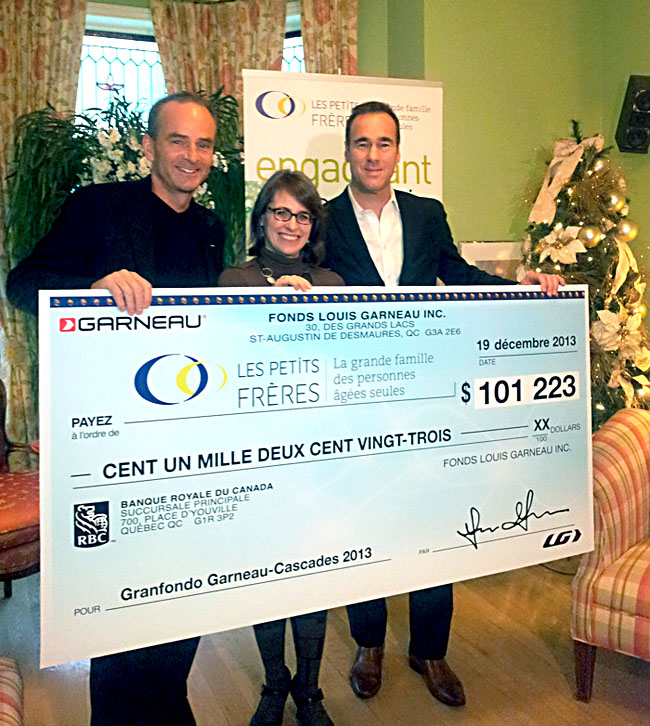