Despite being widely advertised on both the Cycling BC and the BC Masters Cycling Association schedule, riders stayed away in droves from the Gabriola Omnium. Only eight participants signed on for two or more of the stages, including three from the mainland, one from Tofino and one from the promoting club! Therefore it was decided to cut the number of categories to two.

The first stage, a 6.1 kilometre prologue time trial along part of the beautiful Gabriola coastline, was won by MIVA's Mike Gill, who has been a staunch supporter of the club's weekly series over the last two years, and who has shown a remarkable improvement in his road cycling skills and performance.  Second was Devo cadet Aydin Rezazadeh, ony threee seconds back and third was E.V.'s Tobin Copeley, a further six seconds away. These three were a minute ahead of fourth place Dick Hamilton from Gabriola and thus became the B category for the balance of the event.

Stage two was a tough ride around the Island, with the B category having to do a further loop that included the Ferne Road Climb, with KOM points at the top. Again, it was Mike Gill who showed the way, opening up a gap on Ferne that the other two were unable to bridge. At the 18% Brickyard climb, Mike took top points, with Aydin edging Tobin at the crest but losing second place to the wily master rider who jumped ahead of him shortly before the finish line. The C category saw eventual winner Dick Hamilton take both the KOM points and first place, using his knowledge of the course to best his visiting opponents. Second finisher and getting 2 points at Brickyard was 15 year old Margaret Ovenall and third at both the climb and the finish was Frank Hershman. Amanda McRae and Karel Karinek brought up the rear in fourth and fifth places.

The third stage, a criterium on a novel, pentagonal course on Decourcy Road, was liked immensely by the participants as it was shaded from the sun and fairly technical, with several right-angled turns and no traffic. With Mike Gill, Karel and Dick non-starters, both categories  were really small so it was decided to run a single forty minute plus five lap event and to sort out the categories via overall results.

Margaret, with the help of father Tobin, easily won the stage and her category and also took intermediate points along the way. Second and winning his category was Tobin, who had successfully blocked Aydin, entertaining the spectators with a display of good tactics. Third place went to a frustrated Aydin, with the remaining riders finishing a lap down.

Kudos to the many Gabriola residents who marshalled and made the event safe - it was great to have them contribute to the success of the omnium. Thanks also to chief commissaire Bruce Falk who did his usual excellent job of keeping score.

In spite of the very poor turnout, it was obvious that Gabriola is a logical location for road cycling events. The courses are challenging but very safe, the residents like having bike racing there, and the local RCMP (two of them) are very supportive. The omnium can develop into a great annual event but it needs to be earlier in the season and fully supported by both the Vancouver Island and mainland racing cyclists. 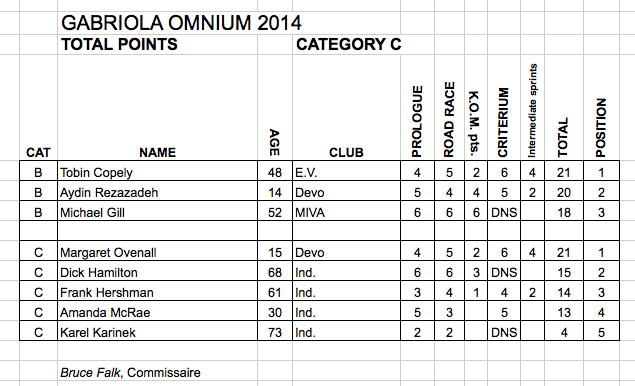