The rider from IAM Cycling covered the distance of 51.852 km, an improvement of 742 metres on Jens Voigt's performance (51.110 km) of September 18th in Granges, Switzerland. 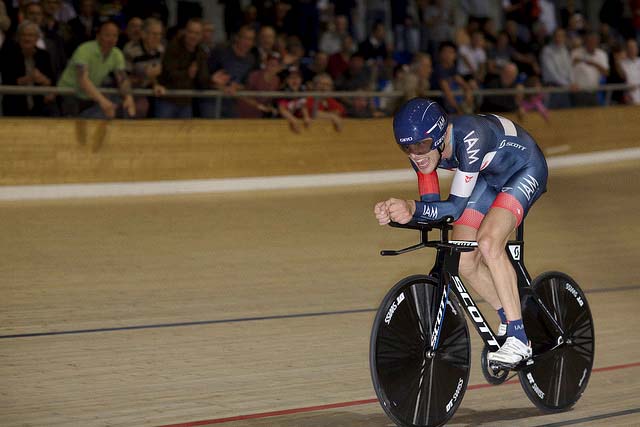 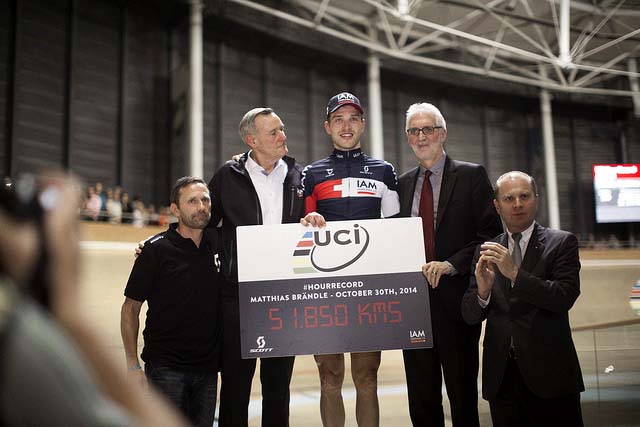 His predecessor Voigt, a German rider with the Trek Factory team, held the record for just five weeks after breaking the long-standing mark of 49.700 km, established in 2005 by the Czech Republic's Andrej Sosenka.

The two latest attempts, carried out in quick succession, are the result of the modernisation of the UCI Hour Record rules in May this year. The new rules authorise all bikes which can be used for endurance track events.

The revival of interest in the UCI Hour Record was confirmed this evening by the presence of media from across Europe in Aigle and full grandstands obliging many people to stand. In addition, the UCI YouTube channel attracted an excellent audience (nearly 15,000 viewers at the same time), while nearly 2000 tweets used the official hashtag #UCIHourRecord.

After his attempt, Matthias Brändle said it had been extremely difficult both physically and mentally: "In the first few minutes I just wanted to get on with it but then it became more complicated. Between 30 and 50 minutes was the hardest and I asked myself 'why did I choose to do this kind of event?' Then in the last 10 minutes, it's the mental that takes over and with the amazing crowd behind me it was easier. Now I am really happy."

"I think it was good that the UCI updated the rules (for the UCI Hour Record). It meant I was able to use almost the same bike as I used (for the time trial) at the Road World Championships. It's a really good change."

UCI President Brian Cookson did not hide his enthusiasm after witnessing the establishment of the new record: "What Matthias has just achieved is a tremendous accomplishment. He is the first rider to come so close to the 52 km mark. It's a very special moment for cycling and for the UCI Hour Record."

"I would like to thank IAM Cycling and Scott for taking up this challenge and I congratulate them for their excellent preparation, which has resulted in this new feat."

"A performance such as this showcases our sport in the best possible way, and it was a source of pride to be able to host this event at the UCI World Cycling Centre in Aigle"

"The UCI Hour Record is an example of our sport in its purest form, with the riders really putting themselves on the line. I believe it is one the hardest goals to achieve requiring perfect preparation and focus."

"Cycling must adapt to the times, and this is why we wanted to modernise the rules of the UCI Hour Record. It is wonderful to have been able to witness two such feats within the space of a few weeks. It is also proof that this record is now fully reinvigorated."

"Finally, I hope that the achievements of Jens and Matthias will inspire other great riders to attempt to beat one of the most challenging records in our sport."