American-based Light & Motion produces a broad range of battery powered and portable lighting systems for activities as diverse as mountain biking and scuba diving.  In business since 1989, the company designs and hand builds their lights at their facility just outside Monterey, California.

Lighting systems in general have seen great improvements over the past decade as battery systems have become more efficient, leading to longer burn times and lighter weights.

However, brightness and burn time are only part of the equation; we have run across many units that have finicky controls, poor mounting systems and are bulky or poorly designed.

Happily, that is not the case with L&M models.  We tested two units:  the Urban 650 and the Taz 1500.  Both feature sealed, non-removable lithium-ion batteries, charged by included USB cables.  The sealed system means that the units are effectively waterproof for cycling purposes, rated IP67 (can survive for 30 minutes under 1 metre of water).

The mounting system is very simple - a stretch rubber strap that is pulled tight around any bar, with holes that fit into a protrusion on the base.

Both also feature amber side lights - a L&M signature - that are quite useful for side visibility. 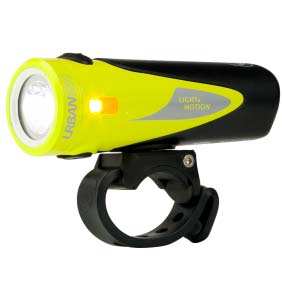 The Urban 650 (the number always refers to the number of lumens produced, with the higher the number the brighter the light) is a small but powerful headlight:  cylindrical (4" long by 1" in diameter) and weighing 121 grams.  It has a single button on the top that controls both on/off and beam options (as well as a lockout feature so it can't be accidentally turned on in your bag, for example), plus a USB outlet underneath (covered by a rubber plug) for charging.  There is a LED light at the back which shows charging status.

The Urban 650 offers four beam options:  high, medium, low and pulse.  Expected run times are 1.5 hours, 3 and 6 hours, respectively.  Pulse cycles between high and low beam and, while it is certainly noticeable, I think I would find it pretty annoying after a while.

Unless it was pretty dark (ie, no street lights), then medium would probably work in most circumstances, 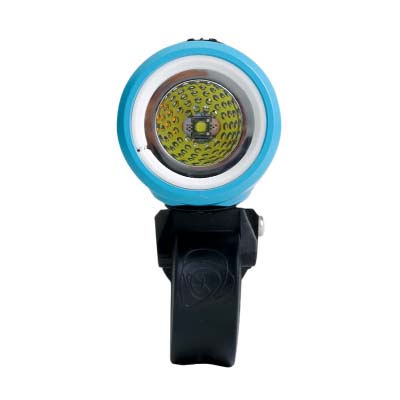 which is important since at high beam you drain the battery in a relatively short 90 minutes.  The beam pattern is very defined and even, and works well.

While the Urban 650 can be mounted to any handlebar, it also comes with a helmet-mount bracket, which is more useful for offroad riding - although for that use you almost certainly need to run high beam.  It attaches to a helmet quite easily.  However, most serious offroad night riders would probably find that on its own it is not powerful enough.

The Taz 1500 is approximately the same length as the Urban 650 and twice as wide, weighing 216 grams.  While it could technically be mounted on a helmet, it is really too heavy for that use (L&M make specific systems with separate lights and batteries for high power helmet mounts).

At 1500 lumens, this is a powerful unit that lights up the trail very effectively.  It has five settings:  high, medium, low, pulse and flash (a strobe effect that is going to get anyone's attention and really annoy them).  All are accessed by clicking through them on the button that turns the unit on and off.  A second button can turn the side lights on and off, as well as lockout the unit for transport.  You can also select Race mode, which allows you to choose just between high and medium, without having to cycle through the entire range; a very useful function.  Burn times range from 1.5 hours on high to 6 hours on low. 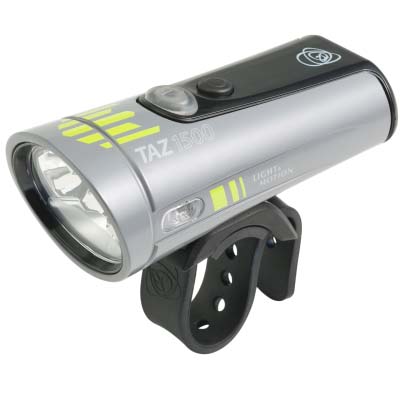 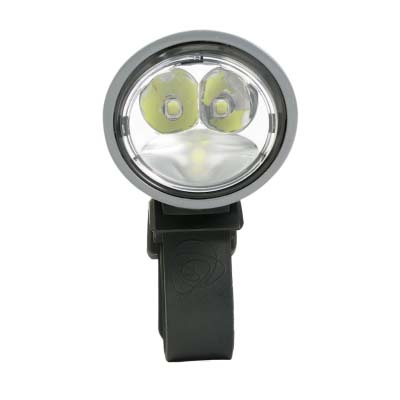 Very easy to mount with well defined and wide beam; one of the nicest self-contained high power units out there.  However, most serious offroaders will likely want a helmet mounted light for directional lighting, so as a standalone system for serious offroading it probably wouldn't be the optimal choice.

Having said that, this is a lot of power for a suggested retail of $299.99 (there is also a less powerful Taz 1200 model for $249.99).  You could match this with the L&M Stella system (a small 500 lumen helmet light attached by cable to a battery pack) and have both excellent wide beam and directional coverage.  Or, for the ultimate coverage, move up to the blinding 2000 lumen Seca system ($500+).