Canadian mountain bikers will line up at Bear Mountain Resort in Victoria, on March 5th, for the start of the 26th season of the Canada Cup series.  This long running series is the pinnacle of domestic mountain bike racing, and has been a stepping stone for Canadian athletes that have gone on to the reach the highest levels of the world stage.

Kamloops, BC-based Catharine Pendrel, the two-time women's cross-country world champion, got her start on the Canada Cup circuit, and considers the Series essential to her development. 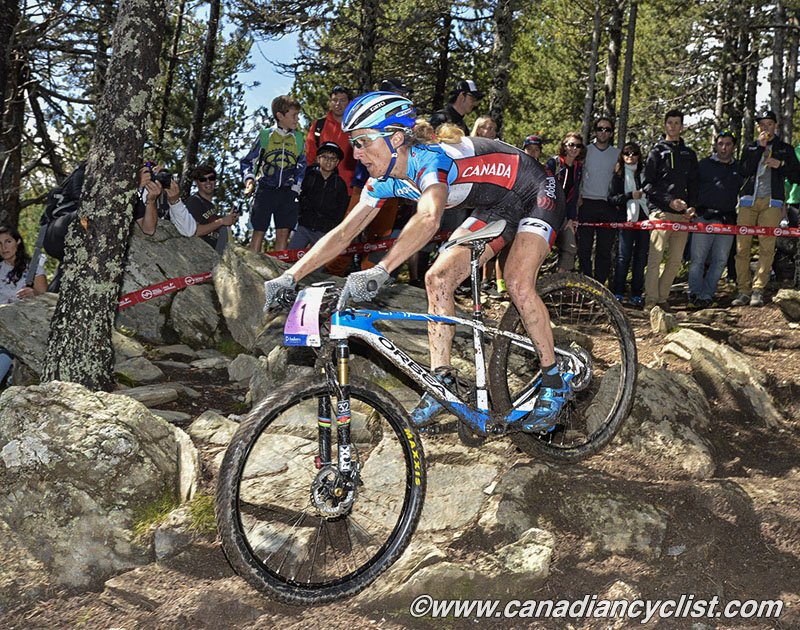 "The Canada Cup is a fantastic series to develop on," commented Pendrel.  "The courses require a high degree of technical skill and the depth of competition is perfect for pushing you to find more in your riding and racing.  For Canadians, learning how to travel and race is key to high level performance, and the East-West circuit offers us the opportunity to also figure this out before we get to World Cups."

Dan Proulx, the National Mountain Bike Coach, also considers the Canada Cup series to be a significant part of the development program for Canadian athletes.  "The Canada Cup continues to be a pillar in our MTB development system. It's the only series where the best riders from each province are racing together and raising the bar for each other. That type of racing allows everyone to improve more rapidly. If we continue to grow and evolve, we're going to continue seeing top level international riders emerging from these races."

"Most importantly, the Canada Cup series is fun! It has a real sense of community and camaraderie that welcomes all. There is a really good energy and atmosphere at these events. Everyone is so supportive with each other."

This year, the Series consists of ten events - six Cross-country (XCO) and four Downhill (DHI).  All events are registered on the international calendar, providing athletes with the opportunity to gain valuable UCI ranking points; necessary to gain admission to World Cup-level competition.  This season, the Series also welcomes Clif Bar, the "Official Energy Bar" of the Canada Cup Mountain Bike Series, as well as the Canadian Mountain Bike Championships.

Mathieu Boucher, Director Performance Development at Cycling Canada, commented "We are excited to be working with a strong group of organizers to deliver the 2016 Canada Cup mountain bike race series. The Canada Cup is an important step in the continuing development of the international race calendar in Canada and in North America."

The XCO series begins in the first-time venue of Bear Mountain Resort, the Official Sponsor and High Performance Training Center for Cycling Canada's Mountain Bike Program.  In conjunction with the racing, the 'Road to Rio' fundraising gala will be held at the Resort.  Many of Canada's international pros and Olympians will kick their season off at Bear Mountain.

Pendrel described the new venue at Bear Mountain:  "The team has done several laps of the course so far since the [national team]camp started this week.  It is a combo new school/old school course with some natural single track after the start followed by one long flow trail descent (jumps and pump terrain with lots of berms) that extends from the highest point to the low point of the course, finishing with single track."

"We then loop back to the top on a combination of dirt road and single track that could be quite mucky if it rains, and finally pavement as we wind through the resort, making for a fairly substantial climb.  The course will require a rider to be both smooth technically and able to put out repeated solid climbs.  As the course starts with a descent you will need a good start to ensure you are ahead of traffic."

After Bear Mountain, the series will take a break until May 22-23, when XCO #2 and DHI #1 will take place at the traditional Quebec venue of Mont Tremblant, north of Montreal.  The XCO event will also be part of the new international UCI Junior XCO series.

Two weeks later, on June 5th, the action moves to Ontario for back-to-back weekends of XCO competition, beginning with the Horseshoe Valley Canada Cup and then, one week later, the Trek Store Canada Cup, which takes place on the 2015 Pan Am Games course, where Canadian men and women won two gold medals.  The Trek Store event is also part of the UCI Junior XCO series.

On June 24th, the Gravity riders get their chance with DHI #2 at the East Coast Open, at Blue Mountain Resort, in Collingwood, Ontario.  The Downhillers then head out West to Panorama Mountain Resort, in Panorama, B.C., for Round 3 on July 16th.  Panorama has been the site of numerous national championships.

A week later, the cross-country riders convene at former national championship and World Cup site Saint-Félicien, Quebec, for their penultimate round, on July 23rd.

Both Cross-country and Downhill riders then finish their respective Series in Whistler, B.C., as part of the legendary Crankworx Festival.  The sixth and final XCO takes place on August 19th, while DHI #4 will cap off the 2016 Canada Cup season on August 20th.  The XCO is also part of the UCI Junior Series.

"The Canada Cups continue to improve," said Dan Proulx.  "This year, in particular, we've seen some significant improvements to the start categories - designed to encourage more competitive racing while at the same time delivering a better experience for Junior development riders just starting out."

The action begins on March 5th, at Bear Mountain Resort.