In less then two weeks the 2016 Global Relay Canadian Road Championships p/b Lexus will take place in the National Capital Region, bringing together Canada's top road cyclists for one of the most important events on the Canadian calendar.  In cycling, each national champion is awarded the unique right to wear the red and white maple leaf jersey for the following 12 months as they compete around the world. 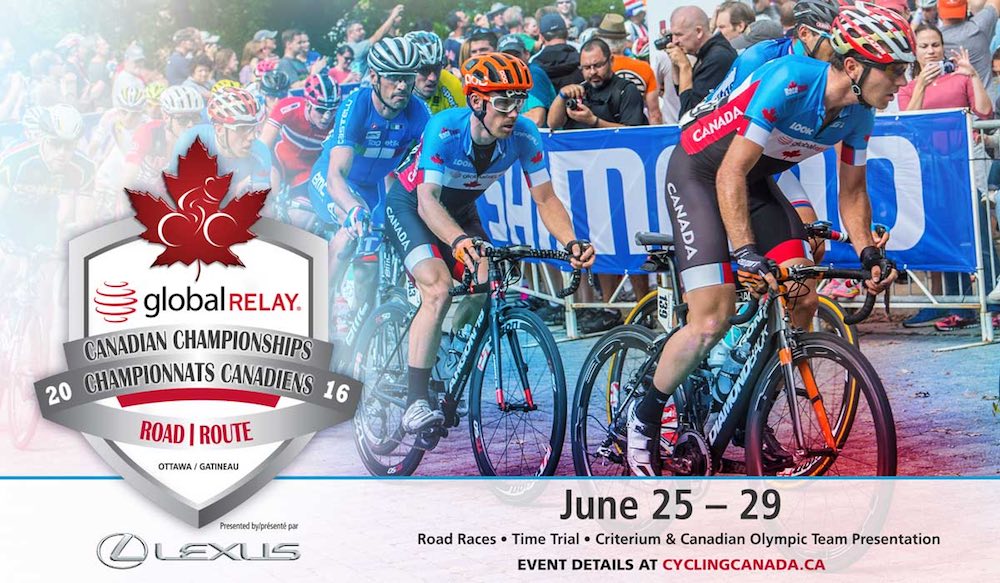 The Road Championships, to be held between June 25th and 29th, will award national titles and maple leaf jerseys for men and women across numerous categories, including Elite, Under-23, Junior and Para-cycling.  Riders will participate in Time Trial, Road Race and Criterium events, with the four days of racing culminating in the official announcement of Canada's team for Olympic and Paralympic Games, which open in Rio de Janeiro in less then two months.

"We are very excited about the upcoming Global Relay Canadian Road Championships p/b Lexus," said Mathieu Boucher, Director of Performance Development at Cycling Canada.  "Riders will be treated to an amazing set of challenging courses with all the hospitality the Nation's Capital region has to offer. The Canadian Championships are the premier event to showcase the top talent our country has to offer."

The Championships will open on Saturday, June 25th, with the mass-start road races for Junior Men and Women, Elite Women, and Para-cyclists.  The races will take place on a ten kilometre circuit, centered around the Tunney's Pasture Campus in Ottawa.  The Under-23 and Elite Men will race on the same circuit, on Sunday, June 26th.

After a training day on Monday, competition will resume for the Individual Time Trial competitions, the 'race of truth' that pits every rider against the clock.  Time trials for all categories will take place on Tuesday, June 28th, in the spectacular Gatineau Park, where riders will be faced with a tough climb and fast descent.

The Championships will conclude on Wednesday, June 29th, with the Canadian Criterium Challenge, to take place in Aylmer, Quebec.  The fast-paced Criterium offers a chance for spectators to see riders hit over 70 kilometres per hour as they race many laps of a short course, with an explosive sprint finish.

The Criterium Challenge will also be the site of the official announcement of Canada's cycling teams for Olympic and Paralympic Games, with a number of Team Canada's athletes in attendance.

"This is the first time in many years that the Canadian Championships road races are taking place in an urban setting," points out Doug Corner, who, along with John Large, is the local organizer for the Championships.  "Ottawa and Gatineau residents, and visitors from across the country, are in for a spectacular set of races with these Global Relay Canadian Road Championships p/b Lexus. There will be challenging courses for the riders, and for the spectators there will be lots to see in addition to the races. We encourage everyone to come out and see Canada's best cyclists and para-cyclists compete for the Championship titles."

Click here to register.  Registration for all events will close on Monday, June 20th, at 11:59pm, ET. No exceptions. For registration fees and other registration information, please refer to the Technical Guide.