Rally UHC finished 1-2 in the men's road race at the Canadian national championships on Sunday, in St-Georges, Quebec, with Adam de Vos becoming the new national champion ahead of team mate Nigel Ellsay.  Nickolas Zukowsky (Floyd's Pro Cycling) finished third and took the Under-23 title.  James Piccoli (Elevate KHS) spent over 100 kilometres off the front on his own before finally getting caught with less than ten kilometres to go. 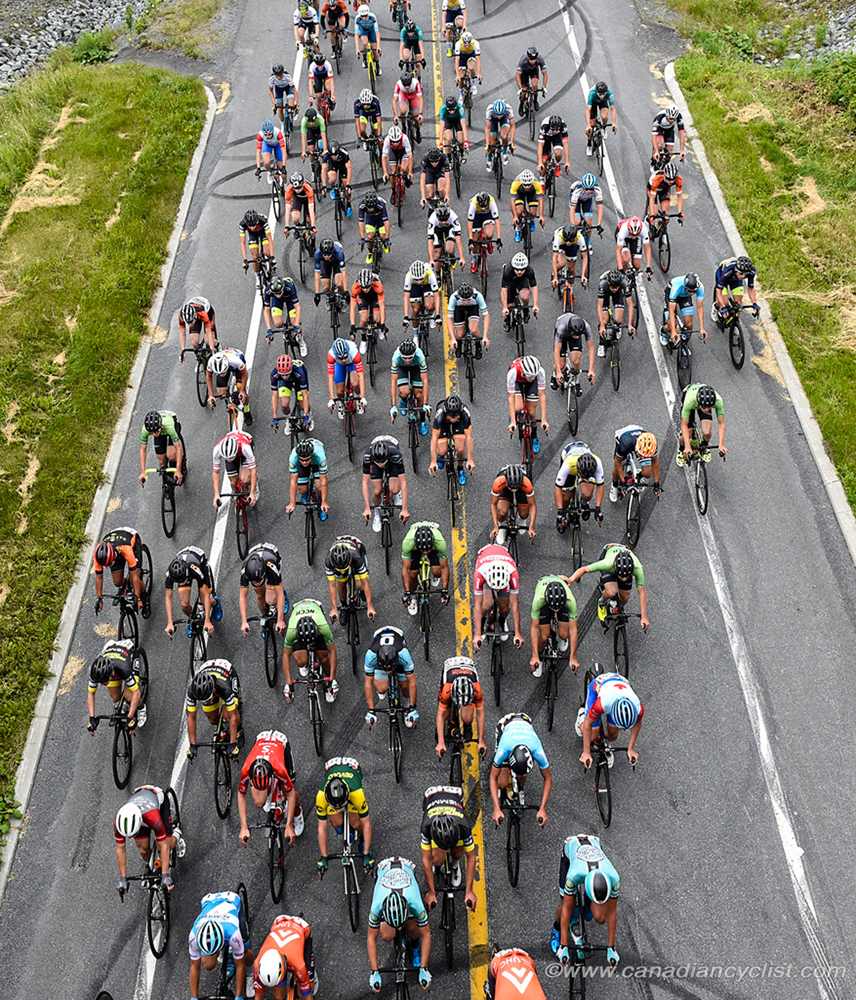 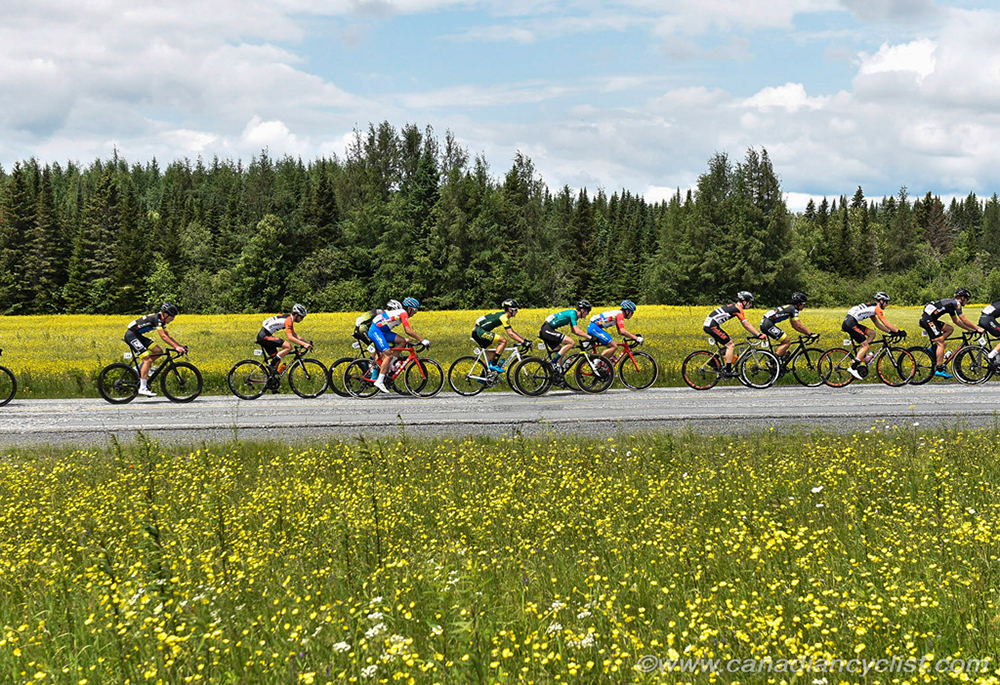 The 119 starters faced a 31 kilometre out-and-back run to a 15 kilometre circuit that they covered eight times, for a total of 186 kilometres.  The rolling course provided little opportunity to rest, with a 15% climb on every lap of the circuit.

Rally and Floyd's were aggressive from the start, testing each other with attacks as the peloton was gradually shredded.  By the time they reached the circuit, the lead group was down to 27 riders, and would be whittled down further from there as riders bridged up or were dropped.

Piccoli, second overall at the Tour de Beauce a week earlier, opened a gap on the rest of the leaders midway through the third lap; more through a hard pull at the front than an attack.  However, despite there being almost 120 kilometres left in the race, Piccoli decided to push on. 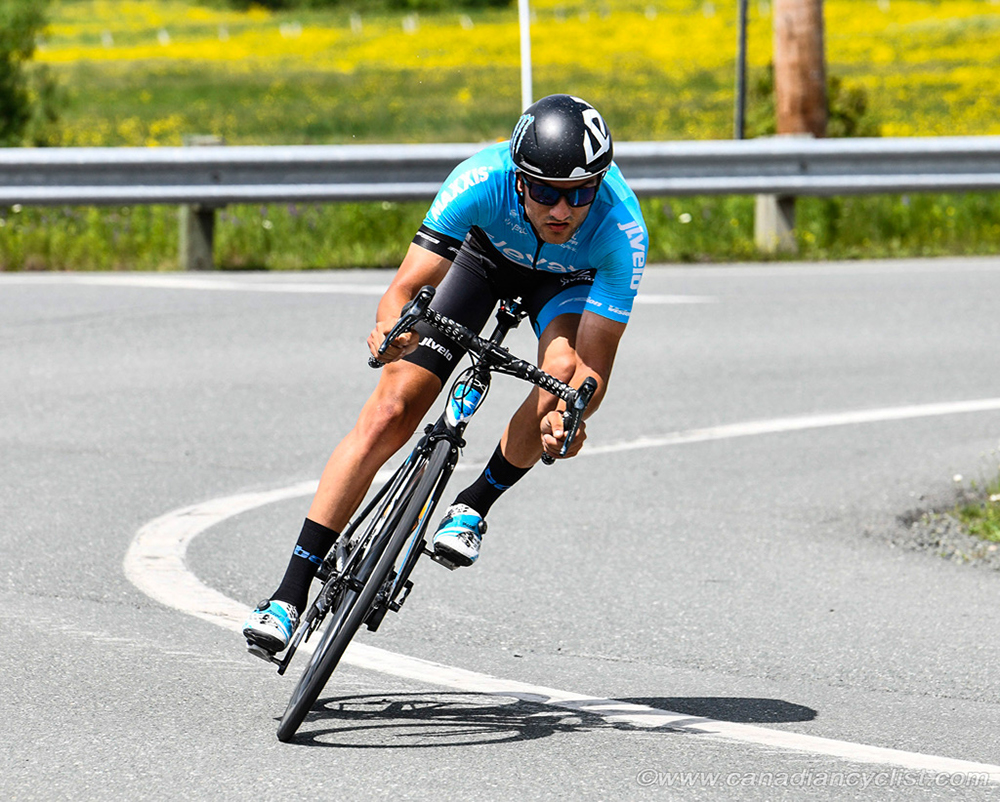 "A hard day," said Piccoli.  "The breakaway happened after the first 60k were really aggressive.  I found myself in the [front] group with one of every team.  I took a hard turn at the front and then no one was there behind me.  I remember seeing that there was 120K to go and I thought, 'well, might as well be now'.  I'm super thankful to the team, who kept me fed, and all the people who were yelling and screaming.  My hope was that they would start to play games behind, and for a little bit it happened.  But then they started to work well together and I got caught with just less than 10K remaining." 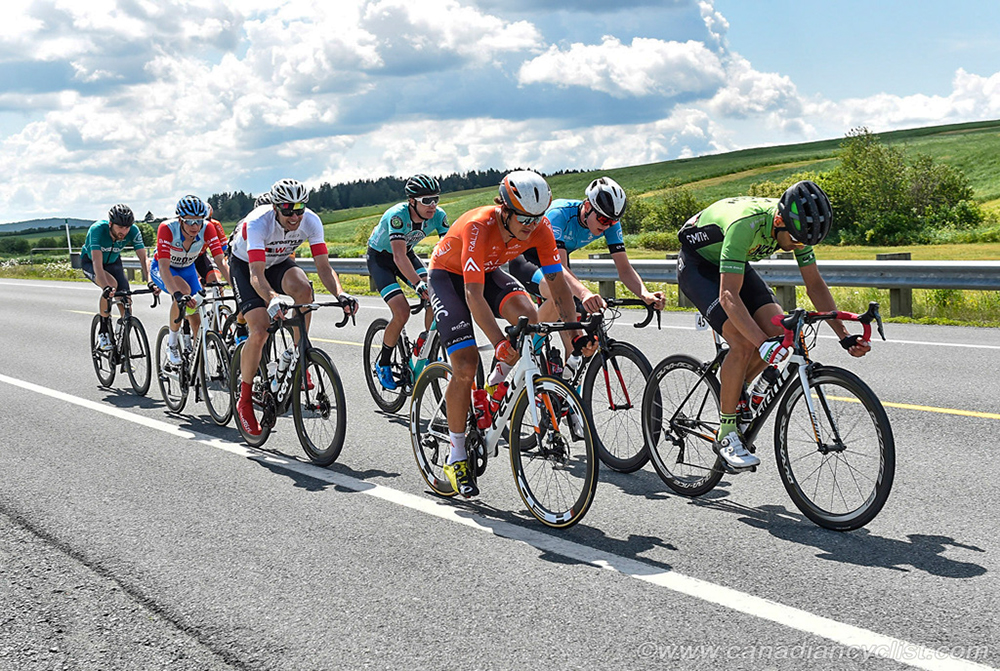 Behind, neither Rally nor Floyd's took charge, and Piccoli was time trialing away, reaching a gap of nearly three minutes with three laps to go.  By Lap 6, the chase was down to eight riders - de Vos and Ellsay for Rally UHC, Zukowsky for Floyd's, Jay Lamoureux (Toronto Velodrome Club), Alexis Cartier (Velo 2000/Rhino Rack), Chris Ernst (Hewdog), Arvin Moazami Godarzi (NCCH Elite p/b MGCC) and Bruce Bird (Wheels of Bloor/Autostyle Collison).  Bird was of particular note - at 50 years old, he was the oldest rider in the race.

Ellsay, de Vos and Zukowsky began to up the pace, and the gap started to drop - to below two minutes as the riders left the circuit for the final 31 kilometres.  The increased speed dropped Godzari, Ernst and Bird from the chasing group, leaving five.

But Piccoli wasn't going down without a battle, and with 20 kilometres to go he was still 1:15 ahead.  The Floyd's and Rally riders kept pushing, and they finally had Piccoli in their sights at 15 kilometres to go, although they wouldn't make the final catch until the final ten kilometres. 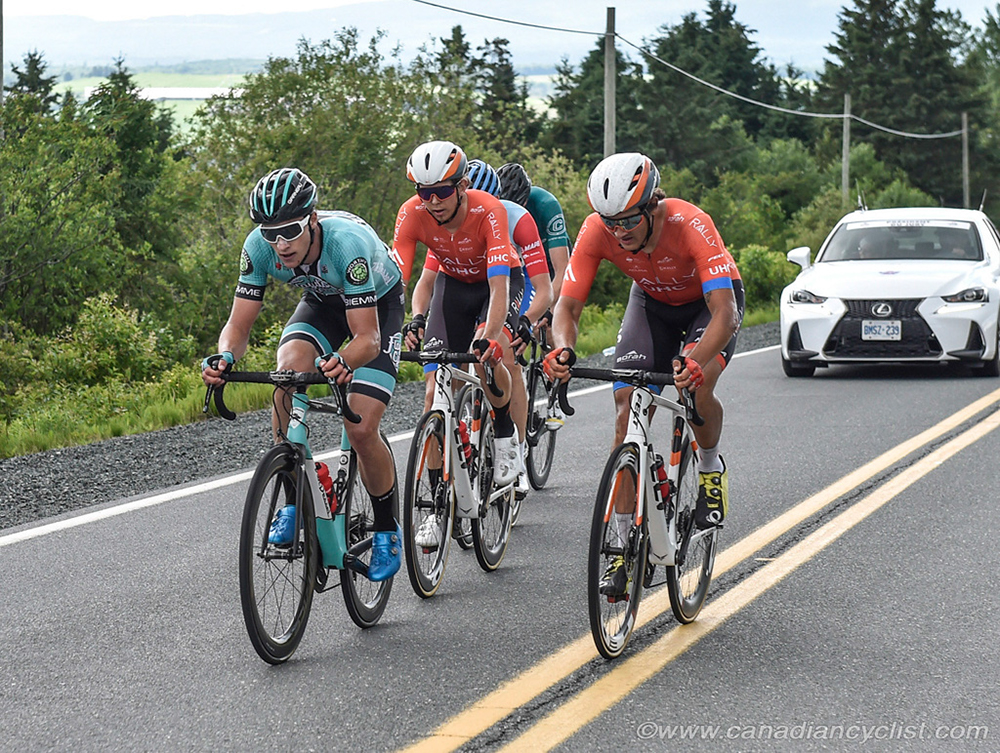 The attacks started almost immediately, with Zukowsky going and then both de Vos and Ellsay countering.  Ellsay got away, while de Vos sat on Zukowsky's wheel, before attacking again in the final few kilometres.  de Vos caught his team mate in the final 500 metres, and then attacked up the 300 metre climb to the finish line to take the title. 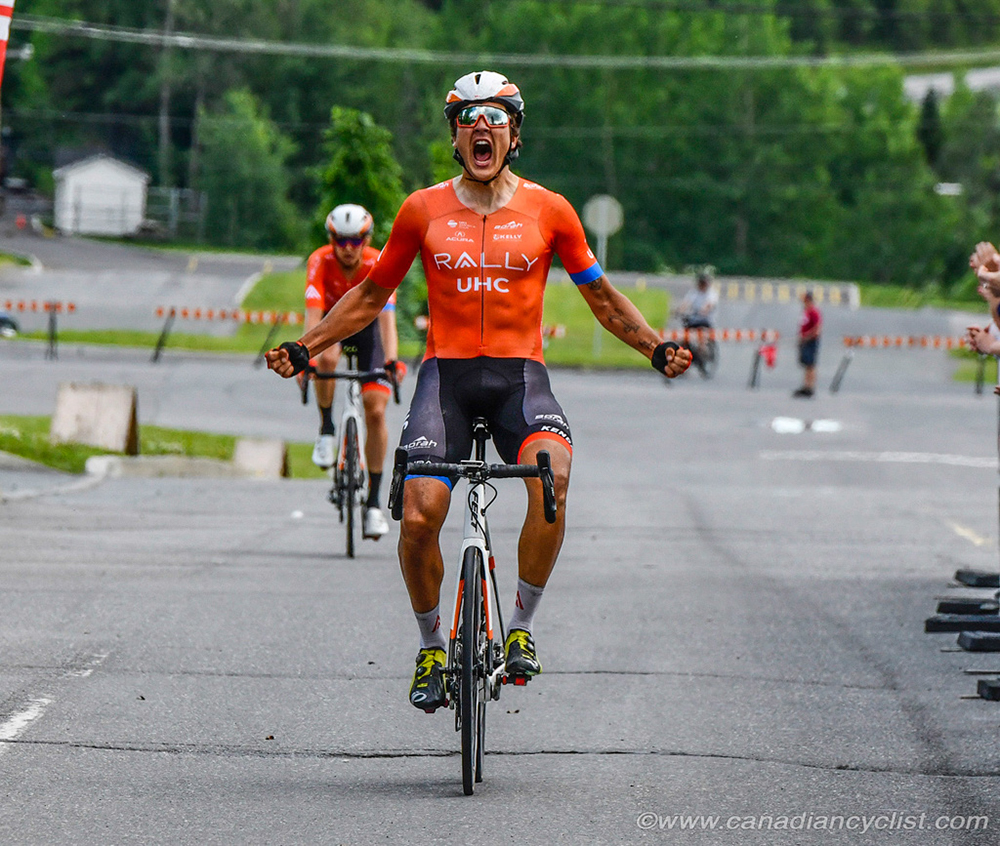 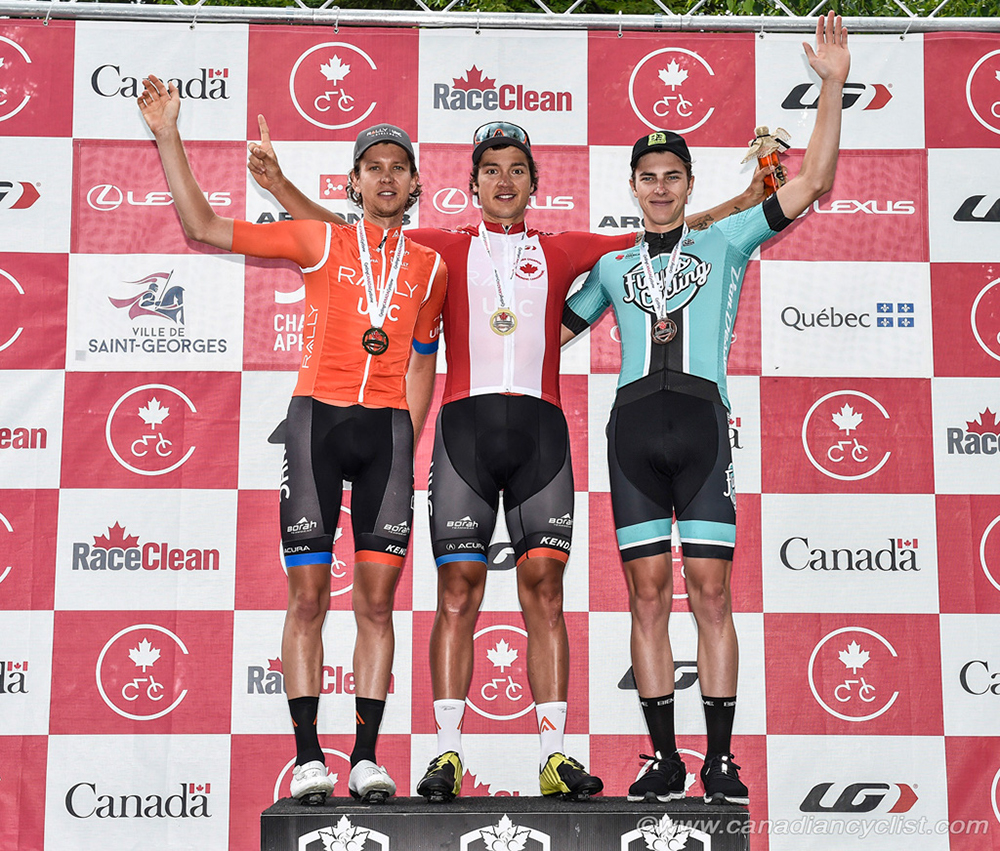 "I was definitely worried about James," admitted de Vos.  "He rode away from me initially and I made the call to wait.  I figured we would bring him back, but he kept taking time out of us.  I knew from racing [Tour de] Beauce, that on the last downhill rolling section a group could roll really fast and we had four strong guys.  We rode right through James - but hat's off to him, he had a really incredible ride.  Zuke was throwing attacks and so was Nigel, so I sat on Zuke until three K to go and attacked on a little climb.  After I got up to Nigel, I just sprinted as hard as I could - I knew we would get 1-2, but I really wanted the win.  I've always wanted to represent with the jersey and kit, and I was really disappointed when I was second in U23, but this more than makes up for it, like a hundred times over."