Riders faced heavy rain on Day 2 of the Road World Championships on Tuesday, in Harrogate, England - so heavy that one Under-23 man crashed when he plowed into water over 10 centimetres deep on a flooded road, which led to the Elite women's race being delayed while efforts were made to drain flooded sections.

Canadian road champion Karol-Ann Canuel was the top Canadian rider for the day, finishing 12th in Elite women, while Nickolas Zukowsky was the top Under-23 man, in 32nd place.

The 30.3 kilometre course from the town of Ripon, headed south to Harrogate, and was used for both men and women.  After a slightly rolling opening 14 kilometres, riders faced three short, sharp climbs and descents before reaching Harrogate and the final 500 metre climb to the finish line.  The rain, which was torrential at times, never let up for the entire day. 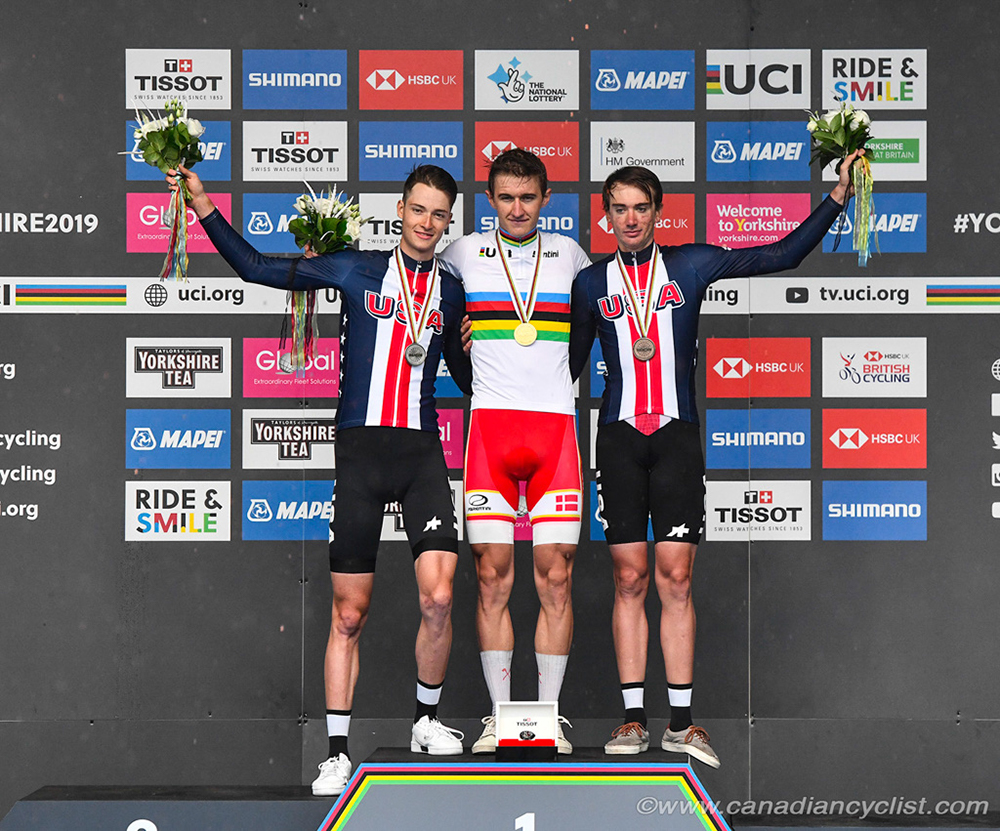 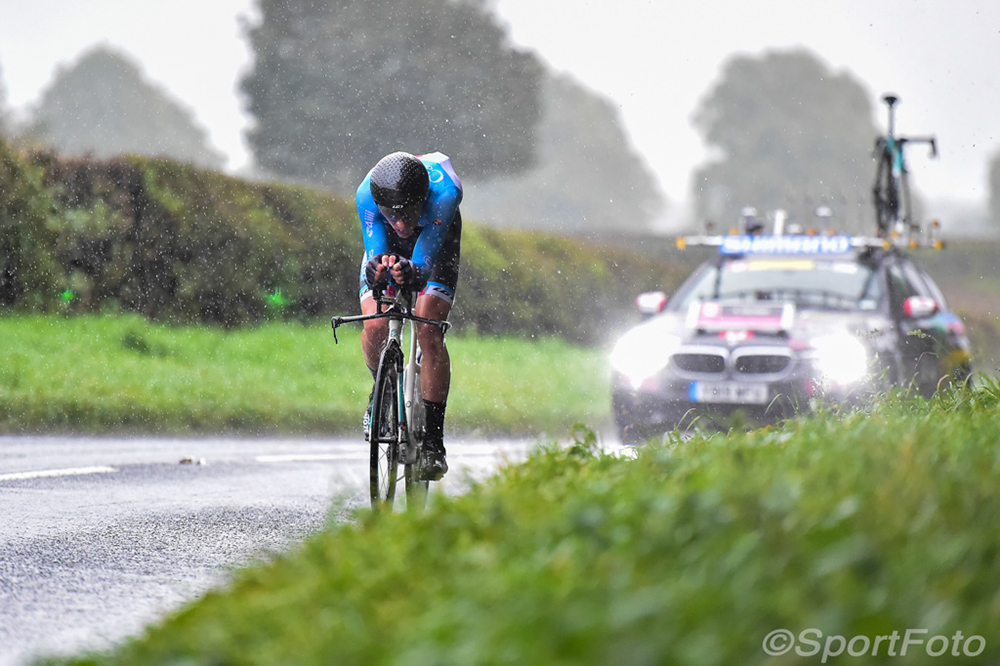 American Ian Garrison, the 18th rider off, set a time that would prove to be almost unbeatable.  He held the Hot Seat through the remainder of the 61 rider field, even beating team mate - and former Junior world champion - Brandon McNulty, who slotted in just behind Garrison.  However, the final rider, two-time defending champion Mikkel Bjerg of Denmark, finished 26.45 seconds ahead of Garrison to win his third consecutive title.  Bjerg was 44 seconds ahead at the halfway mark, losing 18 seconds to Garrison in the final kilometres.

Zukowsky was 29th fastest at the intermediate split, but faded slightly in the second half, to finish two minutes and 55.36 seconds behind Bjerg.  Ben Katerberg, Canada's other entrant, finished 43rd, 3:40.77 back of the winner.

"It was a pretty challenging day," admitted Zukowsky, "with the weather and all the water sitting on the course.  It made for some pretty big puddles!  I went through a couple of them shortly into my ride; my visor was all fogged up, so it was hard for me to see.  I was happy with my effort throughout the race, but technically I wasn't so good and lost a lot of time.  I made some pretty basic errors with line choices and my equipment choice wasn't the best.  So, overall, I'm not super pleased with my performance, but I'm already looking forward to next year and coming back to prove myself." 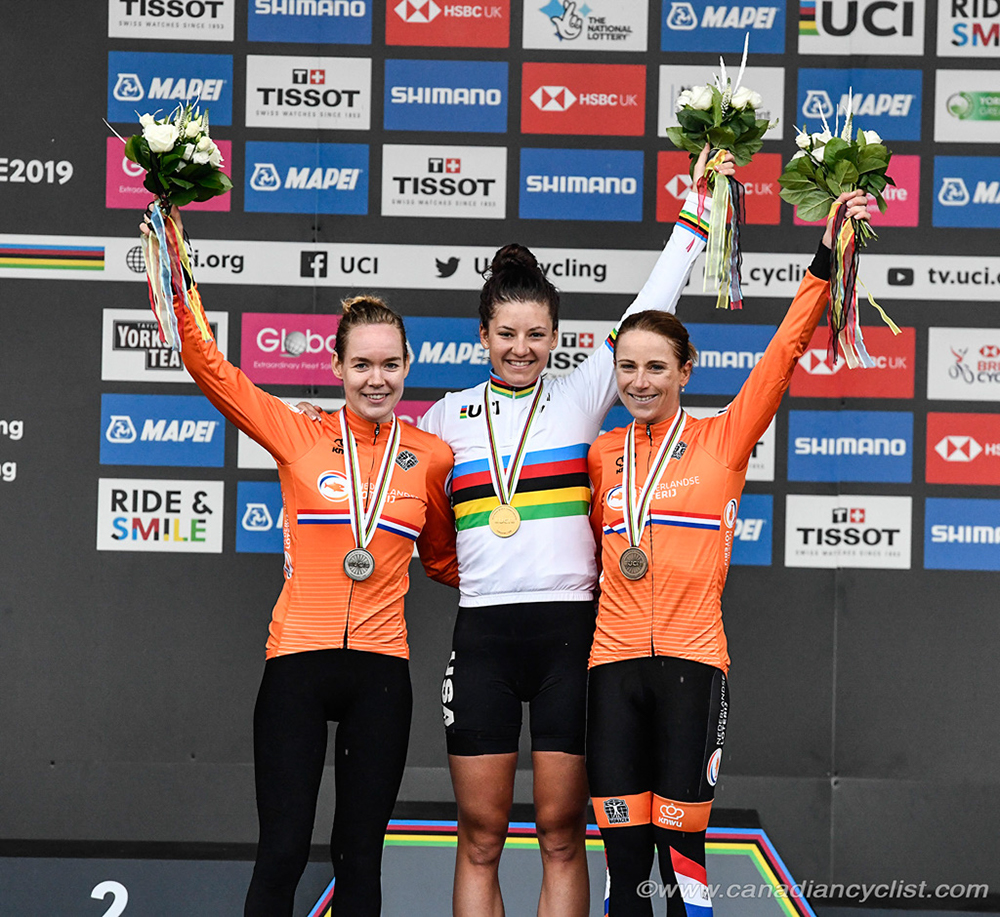 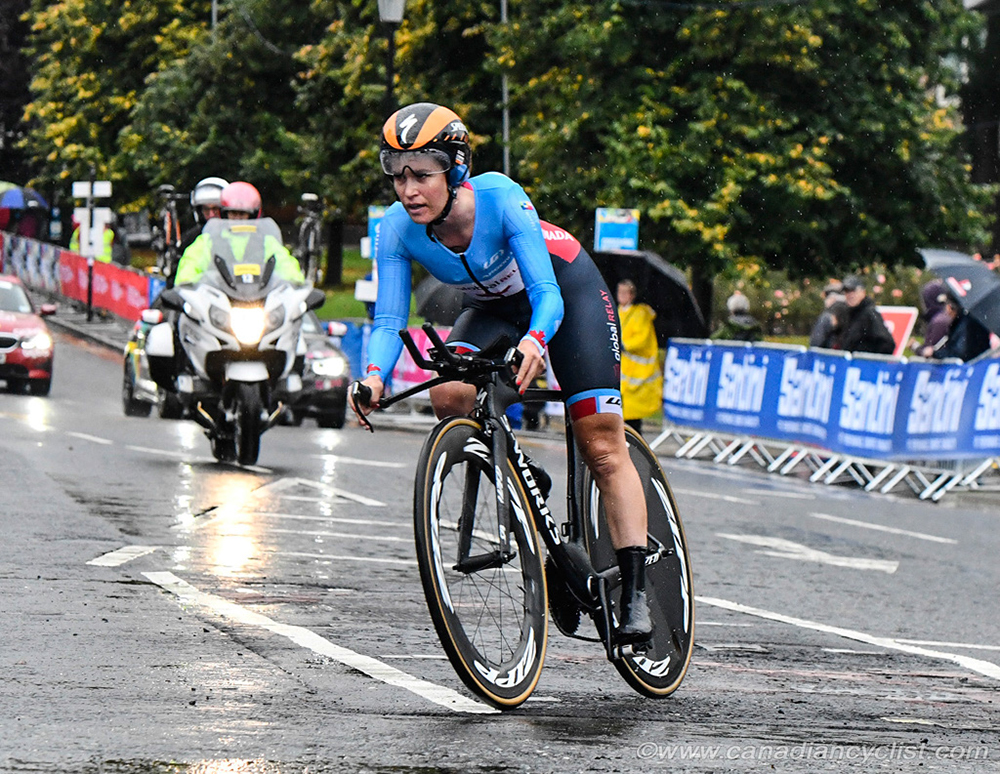 The women's race was expected to be a battle between Dutch rivals Annemiek van Vleuten, the two-time defending champion, and three-time silver medalist Anna van der Breggen.  However, it was American track phenomenon Chloe Dygart, starting mid-field, who obliterated the competition.  Dygart's time of 42:11.57 would have been good enough to place her 12th in the Under-23 men's field, and she beat van der Breggen by 1:32.35, with van Vleuten a further 20 seconds in arrears.

"The course was great," said Canuel.  "The organization did an amazing job to make the course safe between the U23 men and our race.  They were able to drain a lot of the standing water and the puddles; where they couldn't they had cones or a volunteer marking them.  It was a good solution.  It was definitely still raining hard and slippery in places but it was very safe.  I felt I was able to put the power down and do a good TT.  I'm happy with the ride I did, I paced it well and stuck to my plan.  I think my lines in the corners were good and I rode the course well, I think.  I was hoping for the same legs as last year, but they just didn’t show up.  My legs were good, they just weren't exceptional.  Overall, I couldn't have done more on the day, so I'm satisfied.  I'm happy with 12th place, and I'm really looking forward to the road race on Saturday."