April 27/09 11:14 am - Cycling BC Riders Congregate At Olympic Oval For Annual Photoshoot

The second annual Cycling BC meet, greet and photograph was held beneath the Olympic rings at the Richmond Oval on Friday, April 24, 2009. An appropriate venue indeed as the Olympics is just around the corner, and many of the riders have their sights on future successes at the Olympic Games in London 2012 and beyond.

This event is an important one for Cycling BC, as it brings together riders from every discipline they support (Track, Road, BMX, Cross Country and Downhill Mountain Biking) providing a chance for those riders to reconnect with teammates, Cycling BC staff, coaches, and team sponsors.

Cycling BC has been offering camps and races for assessment, motivation and training throughout the year for all cycling disciplines, but the team is drawn from all over British Columbia so it is rare that riders are all together in one place at one time. It is an eye-opening experience for the riders to see the levels of accomplishment represented by this compact and impressive group of young people and their coaches. There was a good deal of whispering and inconspicuous pointing going on as each discipline recognized and learned about their peers .

"See the woman in green and white who just arrived on the road bike? That's Gina Grain – she went to the Olympics for track last year."

"See the guy with the short blond hair? He was selected to ride with the Trek-Livestrong team."

"That woman has been on the National DH team for about 5 years straight. Now she's on the BMX team as well."

"That boy just won the Super D at Sea Otter. And he got a Premier's Award for Athletics."

"Did you hear Dan has accepted a job to coach the National XC team?"

"The young dark-haired girl? She rose to National Team level in a year and came 6th at the MTB Worlds in Italy – top North American."

Looking at this group of dedicated, passionate young riders and their support crew, one can only believe that future success is theirs. Look at the happy faces, but mark the determination in their eyes and you will believe it too.

With the economic situation giving the world knee trembles, sport is greatly affected by cutbacks and butterflies. But with the global drive for greener living, surely there is a great future ahead for cycling. Once again we must thank the people for making Cycling in BC the place to be.

Thank you from the Cycling BC Team 2009
Richard Wooles 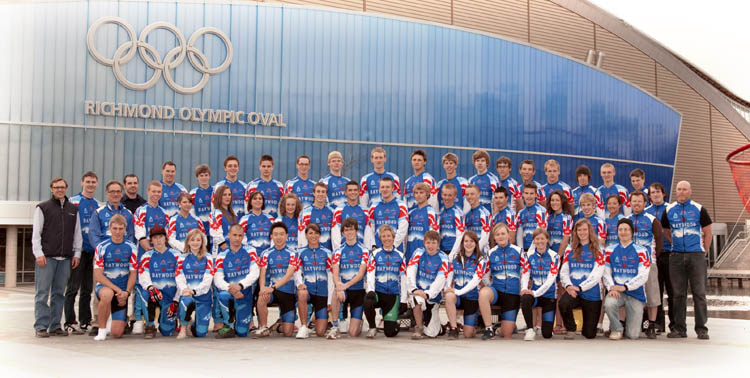