Day three dawned with some fatigued faces but all riders were game to get on with the training. The day was to be a shorter easier morning session and the sprinters and endurance riders combined parts of their workout for a fun session. Both groups did abbreviated warm ups and then the sprinters worked on some skills with an obstacle course set up with cones to be ridden through. After this had been mastered it was done with one hand on bars and then one foot unclipped. The endurance riders were doing short jumps from the blue in small groups and at times the sprinters worked on accelerating into rushing the riders as they passed below.

After the work it was time for some fun as the final endurance set wound down the sprinters joined the group for an impromptu five lap scratch race. One lap into it Cody Campbell attacked hard and got a 1/3 lap gap with minimal response then with 1.5 laps to go Adam Thuss launched followed by Jacob Schwingboth and Mark MacDonald. Schwingboth then really gave it some gas and caught Campbell and passed him for the win with Thuss catching Campbell at the line.

All riders spent another 20 minutes of cool down riding the skills course, getting ready for the evening session.

The 4 pm start of the early evening session came quickly. The endurance riders were split into two teams of three, for the guys, including US Junior Kit Karzen with Laura Brown and Allison Beveridge teaming up with a US cadet Collin Barry . These groups rode three sets of 15 minutes of  Madison practice. The sprinters engaged in  more large gear rushing drills for the majority of the session which was run in conjunction with Connie Cycling’s youth program. It was a great experience for the kids in coach Tanya Dubnicoff’s youth program ( some as young as 10 ) and the riders from Canada. In the end it was still a three hour plus day of riding but with the intensity factor overall a little lower than in previous days.  The day was capped off with a team dinner out to Taco Surf in Seal Beach with a nice jump in the ocean after. 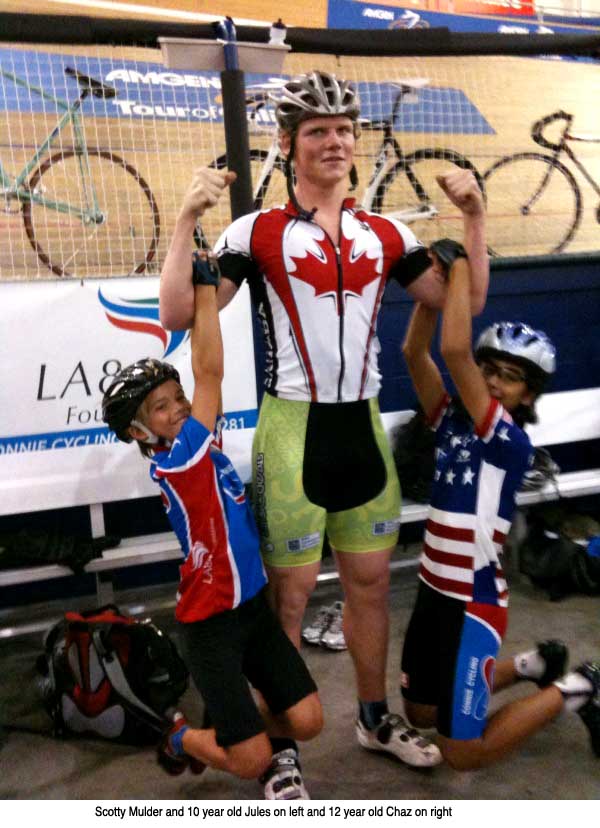