The Canadian Track team is back in Los Angeles for a training camp to prepare for the upcoming World Cup in Beijing, China (January 22-24).  Some of the team, including all but one of the sprinters, arrived early to take advantage of the warm weather and the Home Depot Center Velodrome.

The only training session sprinters Stephane Cossette and Joseph Veloce could get into their first night was a Madison session, “so we figured, what the heck, lets go have some fun. Well, that was my plan at least, just to spin the legs and loosen them up from the travel the day before,” explained Veloce.

Apparently Stephane had a different idea and every two minutes he would attack to gain a lap, giving Joseph no choice but to follow. “It ended up being a decent workout and was a good way to change up training.” 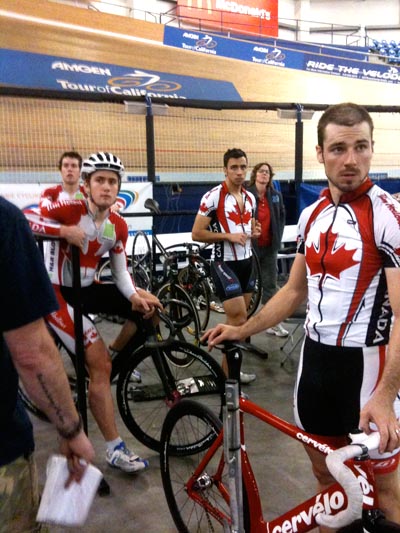 Zach Bell, Tara Whitten, and Julia Bradley also arrived earlier, with Julia welcomed into the American women’s team pursuit camp.  Coming from an Ontario winter it was a welcome change to get on track and train with a group.

The rest of the team arrived on the 13th, with the endurance women ready to reunite and do some fine-tuning before Beijing.  They started with hard efforts, mixing in standing and flying kilos. According to Stephanie Roorda, “it was a reminder of what riding a faster track feels like, at least compared to Burnaby. Even though this group is one of the smallest, it is nice to be back with the track team training hard.”

Monique Sullivan, the only Canadian female sprinter at the camp worked with some of the American male sprinters that were asked to join their neighbours to the north.  She posted some quick times and is riding strong.

The team going to China is: 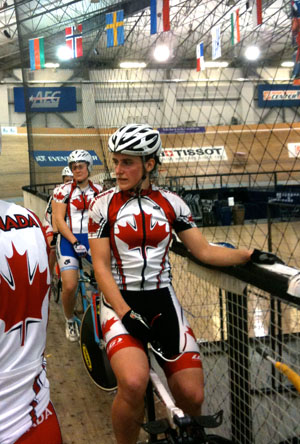