Fresh from their two stage victories in South Africa at the Absa Cape Epic, Swiss brothers Mathias and Lukas Flueckiger joined their new team mate Emily Batty for the first time in Arizona and enjoyed their time out riding the trails on their new Top Fuels.  Both Mathias and Emily have the Under 23 World Title as shared major goals for 2010, while Lukas wants to finish top-5 overall in the World Cup, something he narrowly missed doing in 2009.

Emily: "I have been so impressed and amazed at the team set up, this is a such a dream come true for me and I know I will have the greatest support as I set out for the 2010 race season. I'm excited about racing in the new colors this weekend at Monterey".

On the gravity side, last year's trio of Tracy Moseley (GBR), Justin Leov (NZL) and Andrew Neethling (RSA) are joined by US phenom Neko Mulally for 2010, as the team aims for the number 1 ranking in teams classification. Riders are once again aboard the Session 88 with its race proven geometry and class-leading weight. 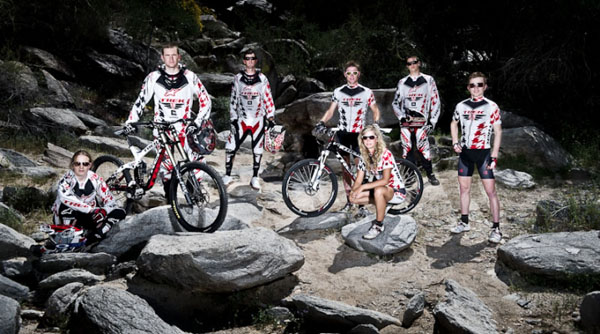 Team Director Martin Whitely: "So much work has gone in over the off-season with the bikes, the upgrading of our team vehicles, and a bunch of other cool stuff, that it's almost a feeling of relief to get on the road and start the season. All of the riders have very specific goals we'll be helping them to achieve and with the arrival of Emily and Neko, we have a very full program ahead of us. The new bikes look amazing, and together with the new kits and the testing we've been doing with Fox Racing Shox, as well some other surprises we have the fans, it should be an amazing season".

Canadian Cyclist will be on-site to cover Sea Otter this coming weekend.