The 2010 UCI Mountain Bike World Cup will begin its 20th season this Sunday, with a new course and a new venue in Dalby Forest, Great Britain, for the first round of the cross-country series.  In addition to being the opening round of the 2010 series, Dalby will offer British organizers their first chance at producing a world-class mountain bike event in the run up to the London 2012 Olympic Games.  This will be the first time a Cross-Country World Cup has been held in England since 1999, and the first ever World Cup round to take place in the beautiful Yorkshire region.

Despite some worries, it also appears that the volcanic activity that shut down European airspace for almost one week will not keep any of the top competitors from attending Dalby, although many took circuitous routes to finally arrive in North Yorkshire.

Specialized, after leaving Monterey, California, Sunday night from the Sea Otter Classic, finally arrived Wednesday after a trip that included flying to Frankfurt, Germany, then to Paris.  From there, they rented a van, drove to Calais on the French coast, took the ferry across to Dover and finally drove up to the race.

The 6.2 kilometre course is winning rave reviews from the riders.  It is a purpose-built track, with a reported cost of 200,000 pounds (approximately $310,000).  Dalby Forest is well-known a hiking and cycling centre, but for the World Cup, organizers built numerous new sections of trails, roads into the main venue, and established internet and cellphone coverage where there had been none before. 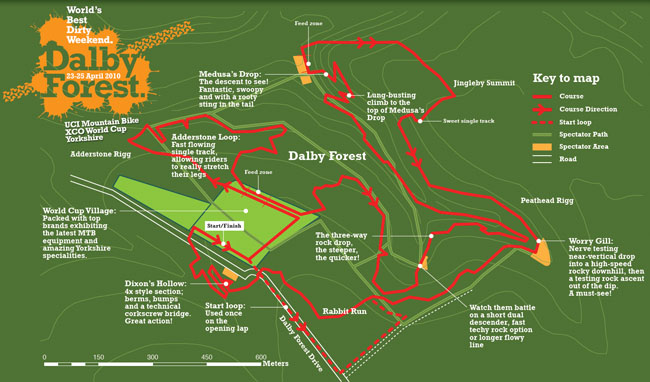 After Worry Gill descent on the way out, the riders climb a steep wooded climb to the top of Medusa's Drop, a switchback decent with a technical exit at the bottom, which drops in to the second feedzone. Then follows a long straight climb to the high point on the course, Jingleby Summit.  Back through the Worry Gill descent, there is a wooded fast section into the final technical portion of the course - Dixon Hollow.  The Hollow puts the riders through a 4-Cross style section, with berms, jumps and a corkscrew bridge.

To do well requires an all around rider, one with both technical skills and the strength and endurance to handle the multiple steep climbs.  Jose Hermida (Multivan-Merida) commented "It is a great course, that requires the best rider to win.  It reminds me of St-Felicien [in Quebec, Canada], with lots of singletrack, technical pieces and short, sharp climbs."

The expectation is that the women will do five laps and the men six - plus a start loop.

On the women's side, World Cup winner Elisabeth Osl (Central Pro) will try to retain the jersey she wore for much of last season.  However, early season racing has already shown that Lene Byberg (Specialized), the Luna duo of Catharine Pendrel and Georgia Gould, and recent Pan  American Coninental champion Willow Koerber (Subaru-Gary Fisher) are all showing good form.  Add to this world champio Irina Kalentieva (Topeak-Ergon) and Canada's Marie-Helene Premont (Maxxis-Rocky Mountain), and we can expect a very hard fought battle for the right to don the World Cup leader's jersey for the first time in 2010.  One rider missing from the start line will be Olympic champion Sabine Spitz (Central Pro), who is still recovering from groin surgery, and is expected to miss the first two races of the season.

The men's race is just as interesting.  Julien Absalon (Orbea) is always a favourite, but last year he proved to be vulnerable, with Hermida taking the first round win.  American Todd Wells (Specialized) also having a strong start to the season, winning the Pan American Continental title, as well as two UCI races in California within the past three weeks.  Wells' team mate Burry Stander, the Under-23 world champion, won the UCI sanctioned Sea Otter Classic just last weekend in California, in a sprint against Geoff Kabush (Maxxis-Rocky Mountain).

In addition to the World Cup Junior and Elite races, the organisers in Yorkshire also hosted an urban mountain bike race on Friday evening in the local town of Pickering, which brought out thousands spectators.  The Pro Eliminator saw the top 16 women and top 32 men from a time trial run of the sub-two minute circuit go into 4-Cross style four rider heats to compete for a top prize of 1000 Euros ($1500).  The circuit took riders around narrow streets, through a single person wide path between house, into a church cemetery (!) and through someone's backyard before a final lungbusting uphill sprint to the finish.  Thomas Litscher (MIG Bike Team) took the men's title ahead of Manuel Fumic (Cannondale) and Ralph Näf (Multivan-Merida), with Eva Lechner (Colnago Arrehini Sudtirol) easily winning the women's final over team mate Nathalie Schneitter and Katarina Nash (Luna).

The action begins with Junior cross-country races on Saturday, followed by the elite events on Sunday.  The women race at 10:45 am local (5:45 am Eastern / 2:45 am Pacific), and the men at 2:30 pm local (9:30 am Eastern/6:30 am Pacific).  Canadian Cyclist will provide it's usual lap-by-lap coverage (subject to cellphone reception on some parts of the circuit!).

Julien Fillion and Cindy Montambault are both on the start list, but we cannot confirm they are here.