After a very successful opening to the season at Dalby Forest, England, the UCI Mountain Bike World Cup heads to Houffalize, Belgium for the May 1st weekend.  Houffalize is one of the classic venues of the World Cup circuit, with some of the most enthusiastic and knowledgeable fans in the world.  The 4-Cross series opens with Round One, while the Cross-country athletes reconvene for Round Two of their series.

The action begins Saturday evening with the 4-Cross, where the top pros will battle for the right to be the first rider of the season to don the World Cup leader's jersey.  The reigning world and World Cup men's champion, Australia's Jared Graves (Yeti Fox Shox), will be looking to keep his winning streak alive and defend his title at Houffalize.  Others to watch include Dan Atherton (Commencal), Roger Rinderknecht (BMC) Joost Wichman (RSP 4 Cross Racing Team) and his team mate Tomas Slavik.  For the women, there two big names missing:  defending Houffalize champion Jill Kintner of the USA, and world champion Caroline Buchanan of Australia.  This makes the 2009 World Cup champion Anneke Beerten (Suspension Centre) the prohibitive favourite.  Others likely to be on the podium include Austrian Anita Molcik, Fionn Griffiths (Norco World Team), Czech rider Jana Horakova and Emmeline Ragot (Suspension Centre). 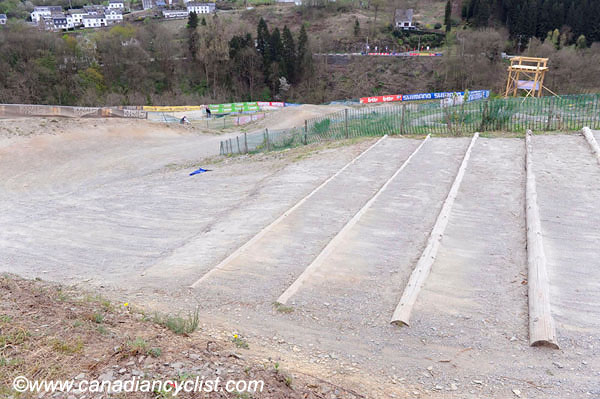 The 4-Cross is almost unchanged from last year

The cross-country offers a brand new course for 2010; one that is two kilometres shorter than the old one, at 5.42 kilometres, and that offers spectators even more opportunities to see the riders.  However, this by no means suggest that it will be an 'easy' race for the riders ...  The new circuit includes multiple short, sharp climbs that zig zag across the hills surrounding Houffalize, requiring repeated explosive efforts by the riders.  Each climb is immediately followed by a technical descent, so the riders won't have much chance to recover from their previous efforts. 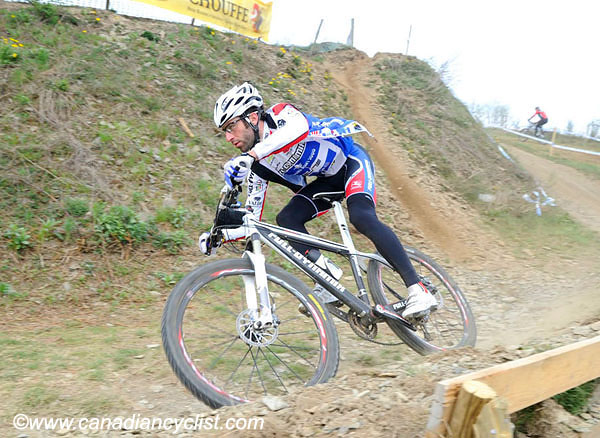 The course is full of sharp descents and tight corners

The long start loop is dominated by the steep opening paved climb; the St Roche hill that played a part in the Liège-Bastogne-Liège ProTour race last weekend, and is still covered with the painted names of top road stars.

After the start loop begins to spread out each field, the riders head into the first obstacle - a steep, short 250 metre singletrack climb of nearly 20%.  After a rolling, grassy section, the riders then drop down a dusty, rutted descent, and climb right back up next to the 4-Cross track.  They then traverse a long, rolling section of grassy track, followed by another tight, twisty, rutted descent, a fast run along beside the river, back up to the top, yet another descent (this one probably the most difficult, with many crashes in training), a final climb, and then a descent back into the village centre onto a cobbled street for the finish.  Currently, it is very dry and dusty, making the descents more rutted and loose.  Weather forecasts are calling for rain by race day (Sunday) which, if it isn't too heavy could dampen down the dusty and make the circuit faster.  The expectation is that both the men and women will do a start loop, with the men then racing six laps and the women one less. 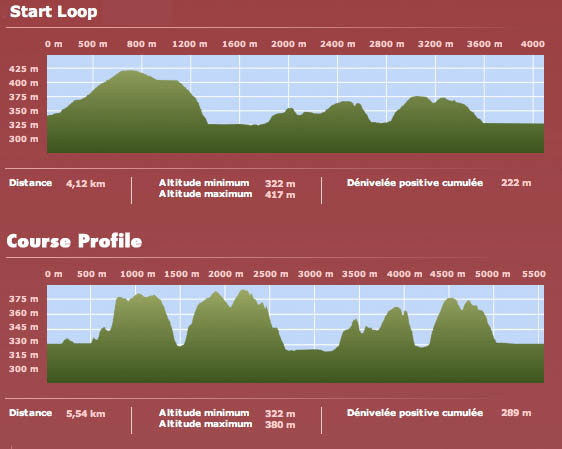 Rider reactions to the new circuit are mixed - most like that the circuit is spectator friendly, and feel that it is hard enough, but don't like that much of the course is freshly cut, very rough and bumpy, and not 'flowy' enough.

"It's a hard course," agrees Todd Wells (Specialized), "but the old course was more interesting and fun.  This one is all up and down, and even the flat sections are not easy to ride." 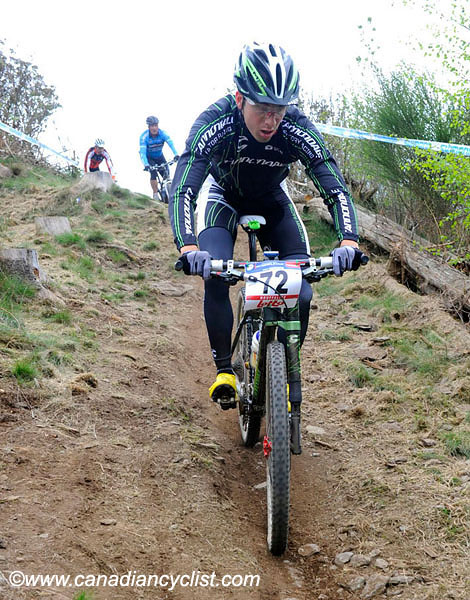 According to Catharine Pendrel, "It's going to be a very hard race, and take a very complete rider to win here.  There are a lot of women who could win."

In the men's race, Round one winner and world champion Nino Schurter (Scott-Swisspower) will renew his battle with defending Houffalize champion Julien Absalon (Orbea).  In their past two meeting - 2009 world championships and last week's first round of the World Cup - Schurter has beaten Absalon in a sprint, and the Olympic champion is sure to be seeking revenge  Other men to watch for the podium include the Under 23 world champion Burry Stander (Specialized) and Multivan-Merida's Ralph Näf, who battled for the win last year with Absalon.  Absalon is one of only two riders to have won Houffalize twice (the deceased Christophe Dupouey is the other); could this be the year he becomes the first three-time winner?

For the women, world champion Irina Kalentieva will try for her second consecutive World Cup win of the season, to extend her lead in the standings.  However, there is enormous depth in this field, as seen at Dalby Forest, where the top six all finished within a minute of each other.  American Willow Koerber (Subaru-Gary Fisher) will be looking to improve upon her second from last week, while the formidable Luna team had three riders in the top six at Dalby Forest - Katarina Nash, Georgia Gould and Catharine Pendrel.  Another rider who can never be discounted is defending Houffalize champion Marga Fullana (Massi Team), who will be going for an astounding sixth title at Houffalize.

Besides Catharine Pendrel, expect Marie-Hélène Premont (Maxxis-Rocky Mountain) to be in the action after a strong eighth place last week, plus Emily Batty (Trek World Racing), who was second in U23 at Dalby Forest, and won the U23 category at Houffalize last year.  Other Canadians include Amanda Sin (Canadian National), Catherine Vipond (Norco), Mical Dyck (Trek Terrascape) Sandra Walter (Canadian National) , Karine Travaillaud and Cindy Montambault.