The 2011 Cyclo-cross Nationals took place in near perfect conditions on Saturday, on a crisp sunny day with a slight breeze blowing.  The morning Masters events began the day with a heavy frost on the course which made some of the descents slippery as the sun melted the frozen dew, however, by the main events in the afternoon all sections were ridable by the top competitors.

Unlike some years, where one rider is head and shoulders above the rest, this year saw tight competitions in the world championship-bound Elite, U23 and Junior categories; the largest gap between first and second was only 33 seconds in the Elite women's race.

Interviews can be found HERE

The U23 men started the post-lunch action with a 23 rider field.  Evan McNeely (EMD Serono/Specialized) was the defending champion, but he faced a strong set of contenders to the title, including last year's runner up Jared Stafford (Ride with Rendall), Mitch Bailey (Trek Canada), Jeremy Martin (Rocky Mountain), Andrew L'Esperance (Norco) and Evan Guthrie (Rocky Mountain).

At the front, McNeely was staying in front of Stafford but couldn't increase his lead, which dropped to ten seconds at the halfway point, before he was able to dig a little deeper in the final lap to win by 16 seconds.

The Junior Men and Elite Women were the next categories on the start line, each racing for 40 minutes, and with the Juniors starting one minute ahead of the women.  National road team member Yohan Patry (Ride with Rendall) took Quebec's only national title of the day in the Junior race after breaking away from a chase group containing Tommy Beaulieu (Team Alberta), Samuel Beaudoin (Team Alberta), Neil Symington (Atlantic Cycling Centre), Christopher Prendergast (Team Manitoba/Woodcock) and defending champion Benjamin Perry (Team CHCH).  Perry had one of the most remarkable rides of the day to finish third, after dropping into the mid-teens shortly after the start with mechanical problems.  He steadily worked his way back up to catch all but Patry and Beaulieu by the finish. 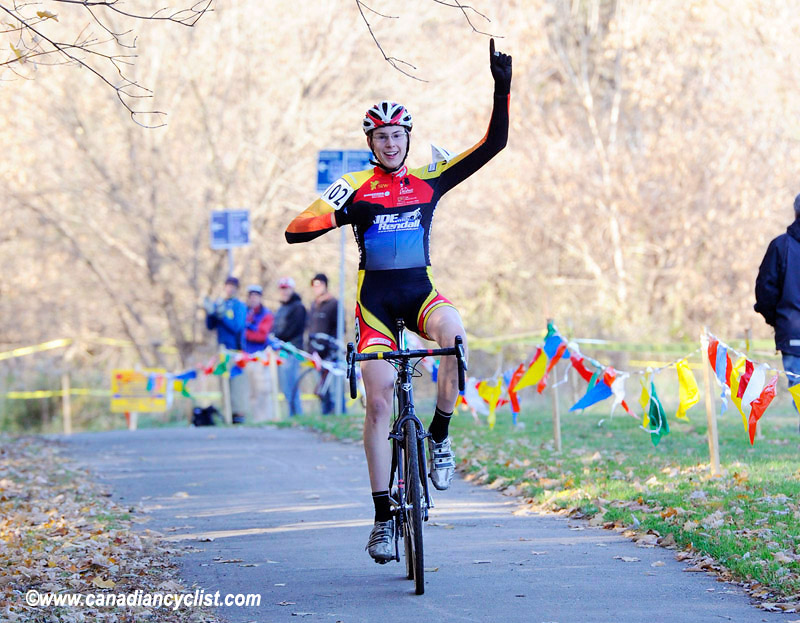 The women's race was guaranteed to have a new champion, with the top-three from last year all missing - defending champion Wendy Simms was on site watching the racing (husband Normon Thibault (Frontrunners) finished fourth in Masters 40-49) with less than two month old daughter Teresa.

Pepper Harlton (Juventus) had a strong start and took a seven second lead over mountain bike pros Emily Batty (Subaru-Trek) and Mical Dyck (Pro City Racing) after the first lap, however, Batty was steadily overhauling her rival on the climbs, and a lap later took the lead, continuing to extend her lead through the remainder of the race, to finish 33 seconds up on Harlton, with Dyck at 1:15.  For Batty, who finished eighth overall in the Mountain Bike World Cup this season, it was the first elite title of her career.  She will not attend Worlds, as she starts to prepare for the crucial pre-Olympic World Cup series next spring. 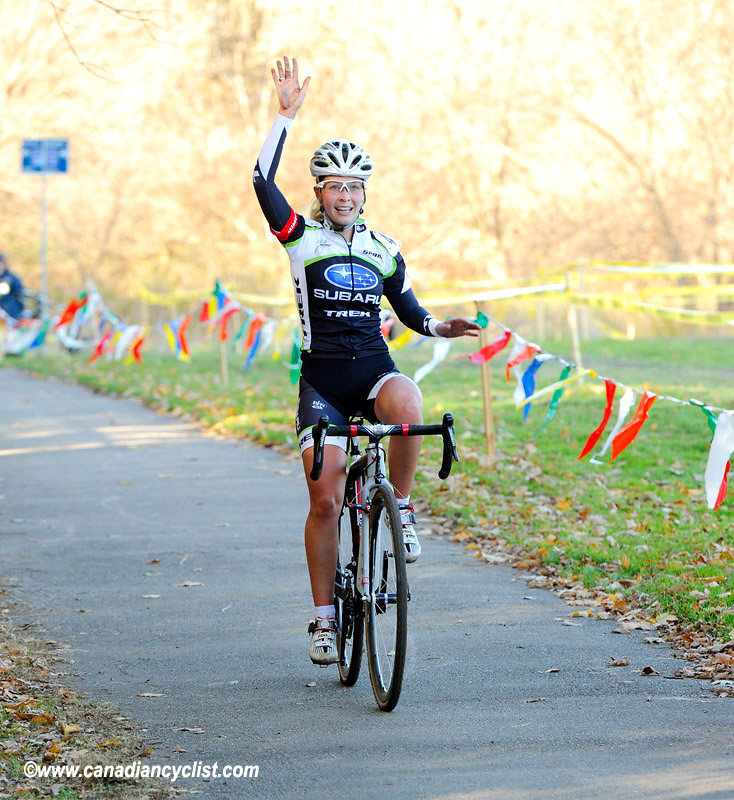 The final race of the day, the 60 minute Elite Men's, proved to be one of the most hard fought.  Defending champion Chris Sheppard (Rocky Mountain) has been racing the US GP series, so he came in with good form.  However, it was road pro Mark Batty (SpiderTech p/b C10) who was the most aggressive in the early laps.  A lead group of eight form at the front early on - Sheppard, Batty, Aaron Schooler (Team H&R Block - SRI Importing), Derrick St. John (Stevens p/b The Cyclery), Andrew Watson (Norco), Mike Garrigan (Lapierre Canada), Adam Morka (Trek Canada) and Craig Richey (Renner Custom CX Team - Raleigh).

Last year, the race came down to a battle between Garrigan and Sheppard, with the duo still going head to head into the final lap, when Garrigan flatted.  This year, Sheppard had multiple rivals to contend with, and sat at the back of the group for the first few laps while Batty, Schooler and Garrigan set the tempo.  Gradually, others fell off the pace, and the group was down to Sheppard, Batty, Schooler, Garrigan and St John when Sheppard attacked at the halfway mark.

He quickly gained ten seconds on the chase, but then stalled for a lap, as Schooler, Batty and Garrigan worked together to pull him back.  Garrigan dropped off the chase, eventually fading to fifth behind St John and Watson, and Sheppard started to slowly open a bigger lead in the final lap and a half to take his second consecutive win.

Meanwhile, Schooler and Batty were unable to drop each other util the final 500 metres, when Batty managed to gain a couple of bike lengths on his rival to take the silver medal.