This year's edition of the Good Friday Road Race is PRE-REGISTRATION ONLY!

Ontario’s Best Cyclists about to Race in Flamborough


Hundreds of road cyclists from across Ontario are about to descend on Flamborough for the 60th running of the challenging, hilly Good Friday Road Race.

Hamilton Cycling Club is thrilled to host the race on Friday, April 6, 2012 for some of the best amateur cyclists in Canada. Riders cover the 18.5-km course multiple times, struggling up the route’s 150 metres of climbing on roads such as Brock, Concession 5 West, Westover Road and Safari Road. The race is sanctioned by the Ontario Cycling Association. Learn more here.

Over its 60 years, the race has seen many changes. We have had big purses, small purses, routes in and out of Hamilton, and the race has even been named after our former lead sponsor, The Hamilton Spectator. Former winners and racers include Olympians, such as Brian Chewter, Adrian Prosser, Sue Palmer-Komar and many more. Current president Wayne Atanas, is a a great club historian.

This year’s race brings with it changes such as featuring Cadets during a higher-profile mid-day time slot, so that youth cycling gets the prominence it deserves. The introduction of a Sportif category will help novice racers enter this difficult sport. We will also have food, announcers, podiums, cash prizes and other features of premier Ontario road races. 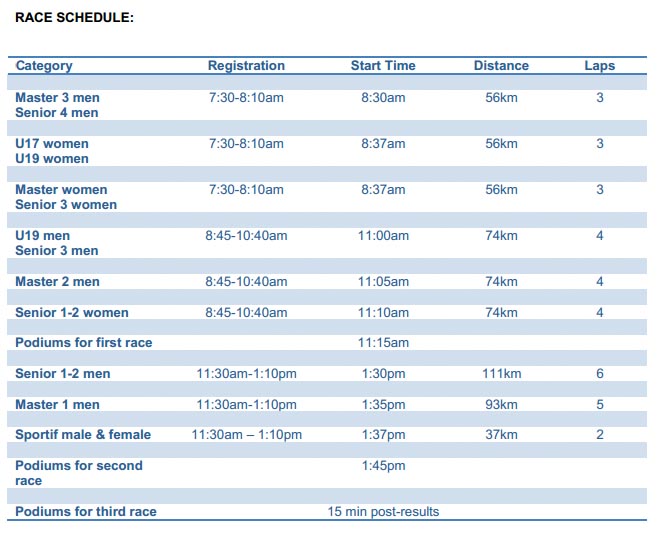