As with all major events, a huge amount of resources go in behind the scenes to make sure everything runs smooth and as planned.  No host country wants to put hours of effort in to see things fall apart in a semi-final from a small step out of the sprinter’s lane and an official relegation.

While the organising committee for the Melbourne Track World Championships consists of paid staff with a huge work load, one person’s incredible volunteer contributions deserve special mention.  Each morning for the past two weeks, 78 year old Marie Manskie drives ten minutes from her house in northern Melbourne to park in a suburban shopping centre.  From here she gets on a tram which takes her right into the city - a journey of around 50 minutes - to where the tram line terminates at Flinders Street Station in the heart of the Melbourne Central Business District.  By now the sun would have risen, and with the early morning office workers she crosses the road to catch another tram to bring her to Hisense Arena, the host venue for the World Track Championships. 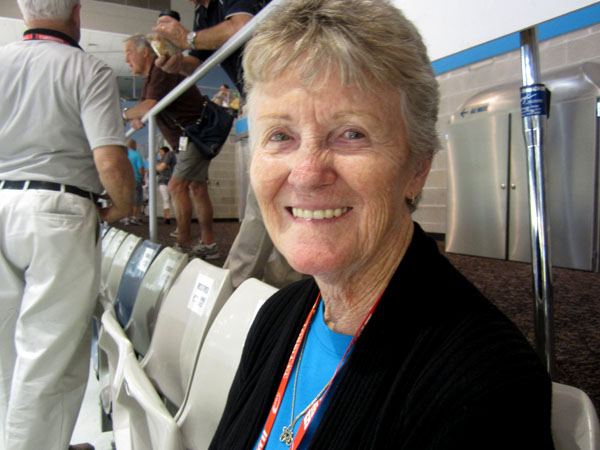 By her own admission, Marie will do any job.  “Anything that needs doing, I just do it”, she says bluntly.

One of her first tasks was to sort over 9,000 individual safety pins into groups of eight, which were allocated to each competitor for securing their race numbers.  With her finely honed craft skills, she sewed all twelve coloured flags that commissaires used throughout competition.  She has also re-covered the triangular pads used for time trial and pursuit events, placed on the duck board around the bends to deter riders from veering off the track.  The new covers sport the ‘Melbourne’ logo, representative of the huge State Government investment into the event.  During competition she will work the volunteer desk each day.

But her worst task? Cutting up and allocating 1,500 tea and coffee vouchers for the media, who she believes are taking up way too much room in the infield (which this reporter admits is quite spacious).

Marie has been around the bikes since meeting her husband Norm at a cycling track in suburban Melbourne in 1962.  She has been a tireless worker for Cycling Victoria, the Victorian state cycling body, since 1976.  According to Cycling Victoria’s General Manager, Kipp Kaufmann, she is an invaluable part of the organisation and her willingness to assist with all aspects of events is truly remarkable.

“Marie is the key to most of the races we run,” said Kaufmann (who was born and raised in Windsor, Ontario).  “She has been a volunteer at every major cycling event in Victoria for the last twenty years.  She is the backbone.  She is there every week, works well with everyone and is that smiling face that everyone recognises.”  Marie was recognised with life membership of Cycling Victoria in 2011.

And at the end of her shift, she will catch her two trams and drive back home, already thinking about the logistics for the next cycling event she will be working at. 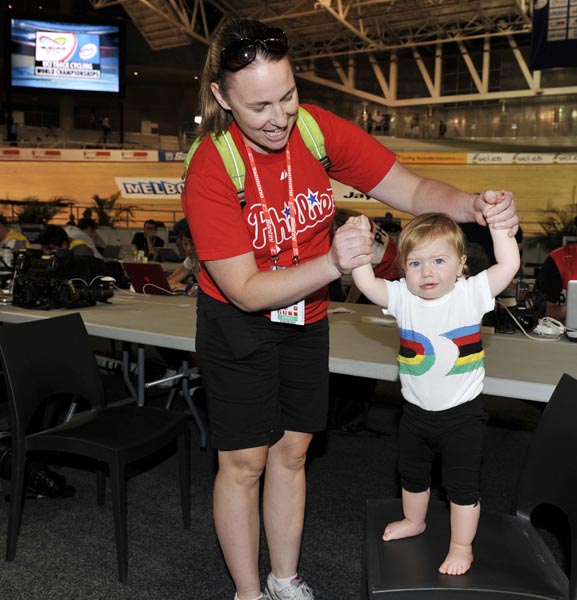 Monique and her daughter Amelie