After spending the first part of the season abroad racing the World Cup circuit, some of Canada's top cross-country racers made an appearance at Canada Cup #3, at Hardwood Bike and Ski, north of Barrie, Ontario.  To no one's surprise, they took top honours under very wet and muddy conditions, with Emily Batty (Subaru-Trek) winning the women's race and Geoff Kabush (Scott-3Rox) the men's.

After an extremely dry spring, Hardwood was expected to be its usual dusty, rocky and fast self, however, overnight it began to rain, and rained heavily all through the elite races, only tapering off as the top riders finished.

Hardwood was the final round of the 2012 Canada Cup, so titles were on the line, and at least one lead changed hands by the end of the day, when Junior Men's leader Peter Disera (Cycle Solutions/AJCC) had a mechanical halfway through his race, forcing him to drop out while in the lead and enabling Alexandre Vialle (Quebec/Scott Pure Pow) to take the win and the title.  National champion Marc-Antoine Nadon (Scott 3Rox) finished second, and this led to a three-way tie at the top of the final Canada Cup standings between Vialle, Nadon and Disera, with Vialle getting the title by virtue of the last win.

In the Junior Women's race there was no such shift in the standings, with Canada Cup leader and national champion Frederique Trudel (Quebec/Specialized) riding away from the rest of the field to take the win and the title.

The heavy rain made Batty cautious at the start of the Elite Women's race, since it is something that World Cup racers haven't seen much of this season.  This allowed Canada Cup leader Sandra Walter (Xprezo-Borsao) to open up a 10 second gap on Batty in the first lap.  Batty regained her 'mud legs' by the second lap, catching and dropping Walter to solo in to victory on what is her home course.  Walter was a strong second, followed by Amanda Sin (Scott-3Rox) in third.  Walter took the Canada Cup title.  (Note:  we have an interview with Emily Batty to follow) 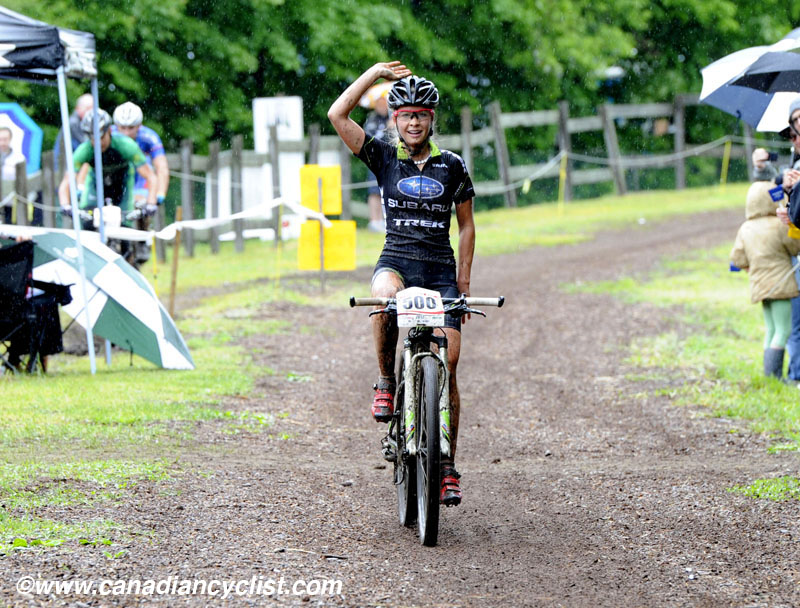 A crash at the start of the Elite Men's race took down Canada Cup leader Raphael Gagne (Quebec/Rocky Mountain), who was forced to chase hard after dropping down to the mid-20s.  Gagne made an impressive recovery to join the Scott-3Rox trio of Kabush, Cameron Jette and Derek Zandstra, plus Neal Kindree (Specialized/EMD Serono) at the front by lap two.  Gagne then took the lead by the end of the lap, chased at 15 seconds by Kabush and Jette, with Kindree a further 20 seconds back. 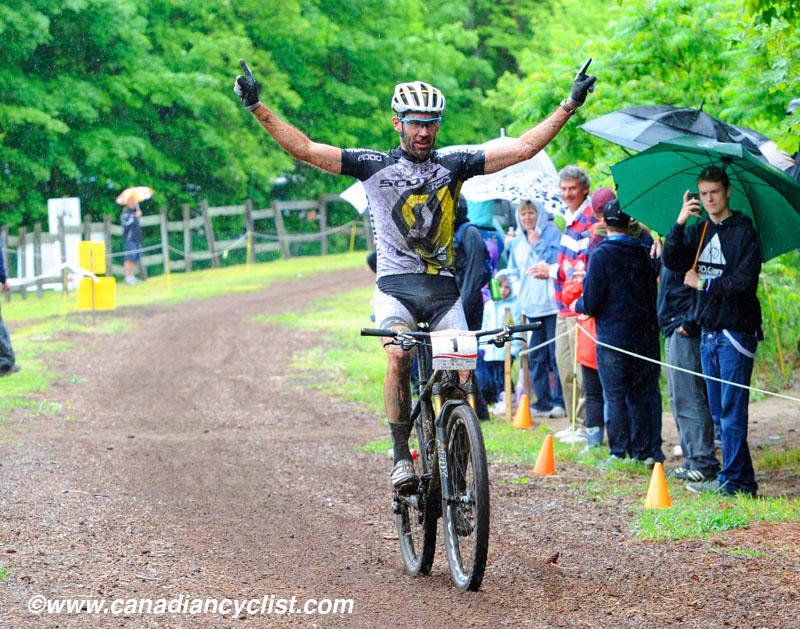 Kabush then made his move on lap four, catching and dropping Gagne by the end of the lap, to solo in for victory.  Gagne held on for second, followed by Jette, Kindree and Zandstra.  Gagne took the Canada Cup title.

(Note:  we have interviews with Geoff Kabush and Raphael Gagne to follow)