The small community of Windham, New York, approximately one hour north of New York City in the beautiful Catskills Mountains always makes a point of turning the World Cup into a local festival, however, this year it has more meaning than usual, since it represents a triumph of the town over the devastation of Hurricane Irene last August.  The hurricane dumped more than 25 mm of rain in a matter of hours, flooding the town.  For a time, it looked like Windham would not be able to recover and host the World Cup, but they have persevered.  You can help, at windhamrebuild.org .

Now in its third year, Windham will play host to both a Cross-country and a Downhill event.  Both the cross-country and downhill courses are little changed from last year, except fo the start of the cross-country, which is now in the center of town and takes the riders over the one bridge that survived the flood, up to the course. The 5.5 kilometre cross-country course is very straightforward - a long, long climb to the highest point and then fast descent to the start-finish. Due to the long opening climb a start loop is not required to spread out the field. Elite men are expected do six laps, Elite women and Under-23 Men five, and Under-23 Women four. 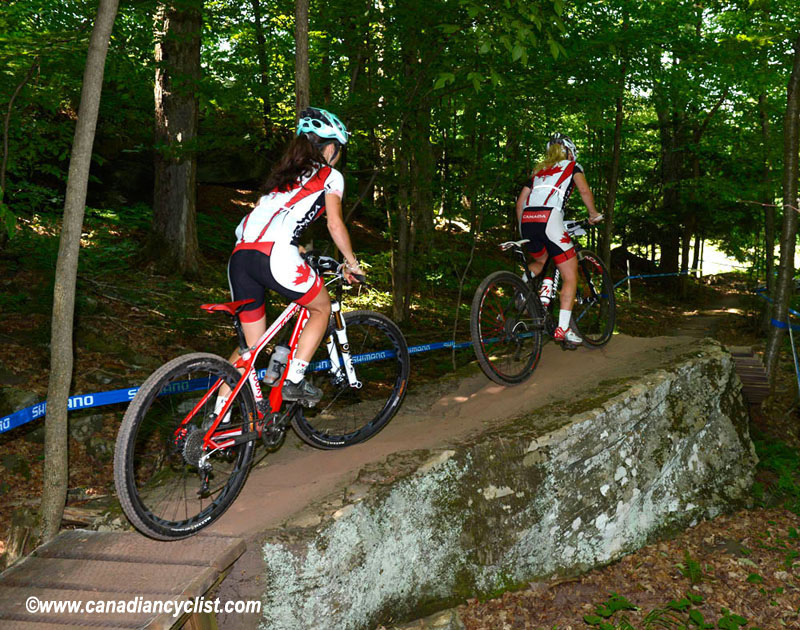 Heading over the rock slab drop at the Troll Trail
CC writer Sarah Moore will be racing here in the Under-23 women's race for Team Quebec, and provided the following course description:

The weather has been hot and dry this week, and while there is rain in the forecast, the temperature will be in the high 20s for the weekend. The trademark red Windham dust has been everywhere in practice and the dirt on the technical sections has become quite loose and slippery, so a bit of rain would do the course good.

The Windham courses are in stark contrast to the rooty, wet and technical Mont-Sainte-Anne course that racers had to contend with last weekend. Both the cross-country and downhill courses are little changed from last year. The cross-country course is very straightforward - a long, long climb to the highest point and then fast descent to the start-finish. A new addition to the cross-country race is that the race will start on the bridge in the village and climb on paved and gravel roads for about a kilometre before joining up with the course at the first technical/feed zone.

The technical sections in the Windham cross-country course are few and far between. The majority of the course consists of climbing on wide-open and grassy or gravel sections of the alpine ski hill. There are brief, shady technical sections in between the climbs in the open. One which riders will have to look out for on race day is “The Blackout,” a technical section where you enter the woods and it really does seem as if someone has turned out the lights. 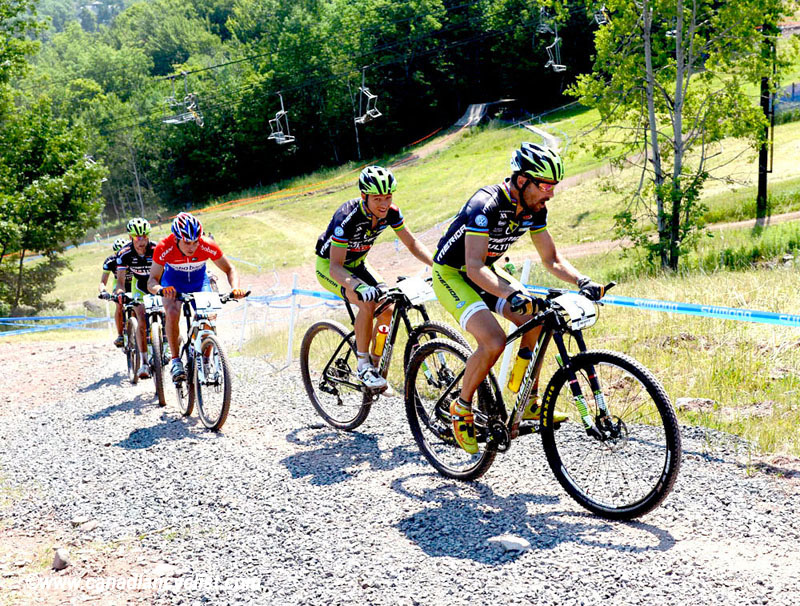 Hermida leads a group up the long opening climb
After almost three kilometres of climbing with little respite, riders hit the second technical/feed zone and “The Patch” and start descending. There are some high-speed sections and some technical, rocky descents, namely the “Rock Garden” and “Kabush Falls.” Expect to see quite a few flats on race day as tires get shredded on the pointy edges. 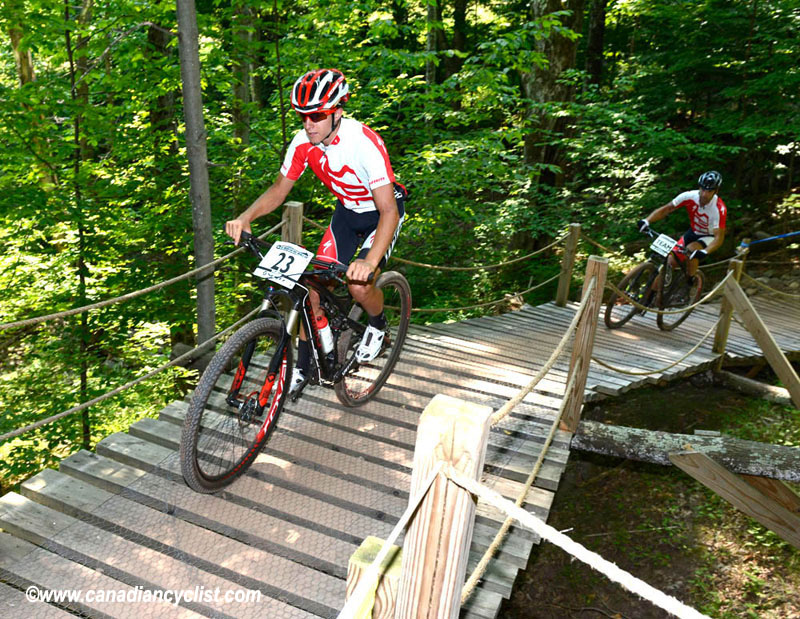 Riders on the bridge
The same strong fields that raced in Mont-Ste-Anne, Quebec, last weekend are  expected to start in Windham - with one exception:  Men's World Cup leader Nino Schurter (Scott-Swisspower) has decided to go to altitude for Olympic preparation.  This means that it is quite likely Jaroslav Kulhavy (Specialized) will take over the World Cup lead.  However, he will have a battle from Jose Hermida (Multivan Merida), who finished second to Schurter in a sprint finish at Mont-Ste-Anne.

In the women's field, world champion Catharine Pendrel (Luna) took over the series lead from the absent Julie Bresset (BH-SR Suntour-Peissey Vallandry), and hopes to extend her lead here.  However, her American team mate, Georgia Gould, came close to winning her first World Cup last week, and will be even more determined to do so on home soil.

For the Downhill, the 1.8 kilometre run takes riders through the trees for much of its length, offering a combination of rocks and roots that favour technically proficient riders. Aaron Gwin (Trek World Racing), with three wins in four events, is proving to be almost untouchable, and he will certainly be looking to extend his consecutive win streak to four on home ground, in front of family and friends.  He finished first in qualifying on Friday afternoon, six-tenths of a second in front of Canadian Steve Smith (Devinci Global Racing).  However, Greg Minnaar (Santa Cruz Syndicate), the only rider to beat Gwin in the past two World Cup seasons, is looking to take his second World Cup win of the season and remain in contention for the overall.  Minnaar will certainly have to improve for the final on Sunday, after finishing only 15th in Qualifying.  Five Canadians qualified for Sunday's final.

For the women, it is a battle between World Cup leader Emmeline Ragot (MS Mondraker) and Rachel Atherton (GT Factory).  Despite missing the opening round, Atherton has been almost perfect in the last three rounds, and had crept to within 40 points of Ragot in the standings after Mont-Ste-Anne.  The British rider again qualified first, moving another ten points closer to Ragot in the overall standings.  Micayla Gatto followed by last weekend's podium (fifth) with a sixth place in qualifying, one of four Canadians to qualify for the final.  Sadly, missing from the start list was Canadian champion Claire Buchar (Kovarik Racing), who has a suspected shoulder separation after crashing last weekend.  Also not starting was Anne Laplante, who crashed in training.
More Photos