Great Britain continues to dominate the track events at the London Games, winning the only medal event on Day 3 - the Women's Team Pursuit.  The Brits broke the world record (which they had set earlier in the year at the test event here) in all three of their rides, on the way to their fourth gold medal on the track, and fifth gold in cycling.  Canada took their first Olympic medal in cycling since the 2004 Athens Games, with the bronze (setting a new Canadian record of 3:17.915 in the process), while the U.S. took silver.  The world record now stands at 3:14.051; a drop of over one and half seconds in two days.  [Note:  We have comments from the Canadian team below) 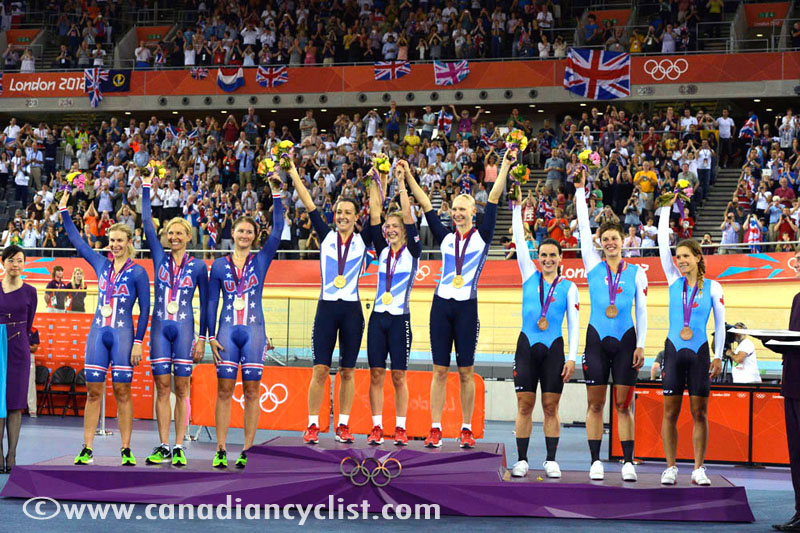 Final podium:  USA, Great Britain, Canada
In other track action, the Men's Sprint took the riders through the 1/8th Finals (Canada has no riders in this event).  All the top riders made it through, however, Jamaican rider Njisane Phillip gave Robert Forstemann (Germany) a scare when his unexpected speed forced the German to go through the Repechage, as did the Malaysian rider Awang.  Besides Phillip, the other revelation of the Sprint is American Jimmy Phillip, who has made it through to the Quarter-finals tomorrow, after displaying both speed and strong tactical riding. 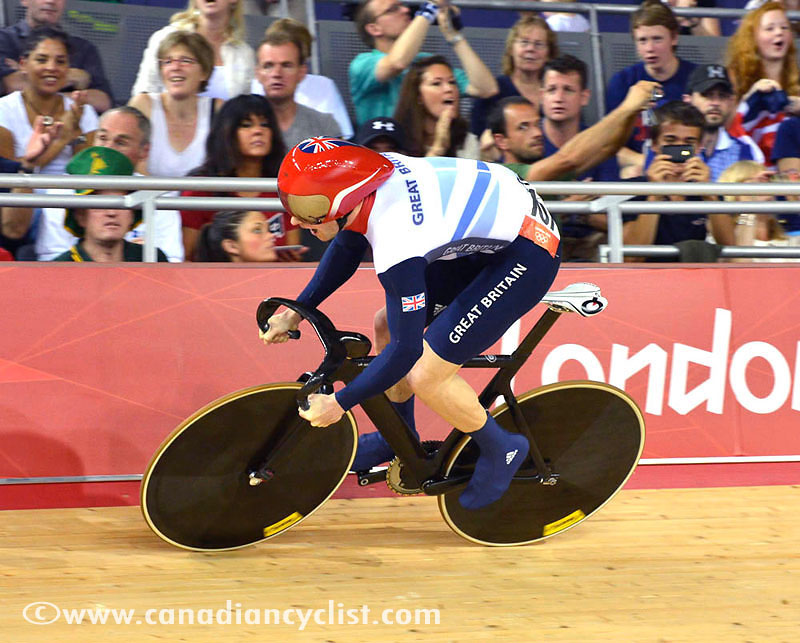 Jason Kenny (Great Britain) set the best time in Qualifying
The third event of the day was the first three events in the Men's Omnium.  Canada's possible medal hopeful Zach Bell struggled, finishing seventh in the Flying Lap, 13th in the Points Race and tenth in the Elimination Race.  Bell currently sits ninth overall, with 30 points, and it will be difficult for him to get back into medal contention.  Bryan Coquard (France) leads after three events with 10 points, followed by Elia Viviani (Italy) at 13 points and Glenn O'Shead (Australia) at 14.  The final three events take place tomorrow,

"It really feels amazing. Yesterday we were a little bit disappointed in our ride, and especially being so close to second and third.  We had to kind of regroup overnight, changed the lap orders up a bit.  I'm really proud of how the team came together today. It was close the whole way. We were just fighting. It's an amazing feeling to have done it."

Going up against the Brits in the semi was hard.  How did you prepare and manage it?

"We really made a decision to just use the energy of the crowd. It's just so loud you can either let that distract you it or you can feed off the energy.  We knew that was the way it was going to be.  We knew that from having raced against the Brits at the World Cup here.  We were prepared for the noise and just did our own ride.  It has been really exciting just to see the depth of Canadian women track cyclists now."

On the Canadian chances of bronze after the first day:

"We knew we had the potential to ride on the podium after recent performances at the Olympic test event and at the world championships, but it was still quite oppressive to see yesterday all the other countries bringing their 'A' game to this event, which is just fabulous. It elevates the competition a bit. It was definitely a very tight bronze final against Australia, but we gave it everything we had so, a good performance for us."

On riding against Great Britain:
"It was also quite exciting to go up against Great Britain. We were here at the test event in February and we faced them in the gold final. I think the crowd elevated our performance and the British performance. I was excited to feel that positive energy from the crowd again today. It was just phenomenal, I couldn't even hear myself breathe and we set a new Canadian record in that ride so I was pretty happy with our ride."

On whether they were aware how close the race for bronze was:

"We know where the other team is based on where our coach is standing on the line and because she was barely moving every time (lap) we knew it was tight, plus the roar of the crowd every time we crossed the start/finish (line) - we just knew something exciting was happening. We gave everything we had, knowing it was going to be very very close. I am so glad we crossed the line before them."

On competing at her first Olympics:
"Jasmin and I, this is our first season of international racing, but it's just a testament of the strength of this team definitely to have someone like Tara to be able to lead us and motivate us and being able to train with her and compete with her is such an honour really, and I think she's a huge part of getting us here in addition to all the coaches and all the staff."

On the overall performance:
"It was fantastic to set a new Canadian record in our first ride today. I think we were a little bit disappointed with our time yesterday and seeing what the other teams were capable of, but we didn't let that bring down our focus and we knew we could do better. I think we showed that today so we can all be really happy with our ride."

On what they did to re-motivate themselves after the disappointing first day:
"We knew it was going to be very tough to beat the British team to make the gold medal round. We also knew that we had every chance to win the bronze medal, so we focused on that and we knew we could have a better ride today. We knew we had so much more to put out there. So that's what we focused on, just making sure we gave our absolute 'A' game today."

On winning the bronze medal:

"It is so special, we came here and we knew it was a possibility, but we knew it would take our everything, and to be able to see it come together and to have this to share with all the people who supported us, and all of Canada, is just so amazing."

On the competition format:
"The way the girls rode all the way through competition is a testament to them.  The format that is written for the team pursuit competition just shows you that it's not over till it's over. Even though we may have not had a fully capable ride the first round we regrouped and really had a solid ride earlier today and then accomplished it by winning bronze in the final."

On the team behind the athletes:
"It's not just the athletes that perform. Behind the scenes we have physiologists, video experts and they also help gather times, collect information and that helps me do my job. They can look at lap splits the way the rides have been distributed and we make changes and ultimately we ride better because we had the time to refocus and the plan was executed this morning."

On the gap between Great Britain and the other teams:
"I think GB (Great Britain) has magnets on the track. No, I'm just joking ... but I did say that to my colleague on the British team. How do you guys do that? It's phenomenal. The sport has only been introduced in a short time and already they break a world record every time they ride."

"In a sense, it's almost subliminal that we are in the same competition, but at the same time, if we're going to compete against somebody I want someone that's going to be the best that they can, because that's just going to make us ride better. It's great for women in sport and great for women in cycling. There's a forerunner and we have to chase them and that's a good thing."

On the future of cycling in Canada:
"We have just done such a great job on such a small budget. Everytime we hear rumours on the GB budget and what they have accomplished and it's always: there's no limits and Ferrari testing and things like that, but this is just a start for us on the small budget we have."

"Look at what we have done with the men's Omnium and the women's Omnium. It's unfortunate we have only one male sprint athlete here, but Monique Sullivan has done such a great job here (sixth in Keirin). That shows you the capability of our programme in such a short time and so we really need a facility in Canada and to target other athletes from other sports."

"Well, definitely this means it's a good start, and we still have a few events to go where we have very good medal potential.  This is a good start hopefully it will get the ball rolling for the other cycling athletes."

How does it feel to have this medal at the first Olympics since you took over the HP position?

"For me I would say it's a bit of a reward.  Having worked hard putting the system in place for the last four years. It's a good reward.  Obviously we are going to push forward for Rio coming off this result. Hopefully we've got some other results coming up in the next few days."

I could see you on the infield, watching the race, and saying 'come on, come on'...

Cycling has been funded in the past as Tier Two sport in Canada.  Will results like this move cycling to Tier One?

"Coming into these Games we were considered a Tier One, at least on paper. This is just going to solidify where we are at. Obviously we are hoping to get a lot more funding through Sport Canada via OTP [Own The Podium]. Programs are not built just on four years, you've got to be patient ... it's built on 8 to 12 years."

"You just have to look at what the Brits have done in the last 12 years. They are where they are because of the confidence and all the funding they've had for the last 12 years.  This is a 12 year process, and hopefully Sport Canada and OTP will understand you have to be patient and go with the systems that are in place, and repeat performances year in, year out."