The skiing at Sir Sam’s is of the downhill variety, so with a significant hill at hand, it was only fitting that there was plenty of climbing on the agenda.  Throw in twisty, rooted singletrack, steep descents and slick rock sections, and it was a course that rewarded riders skilled in all aspects of the sport. 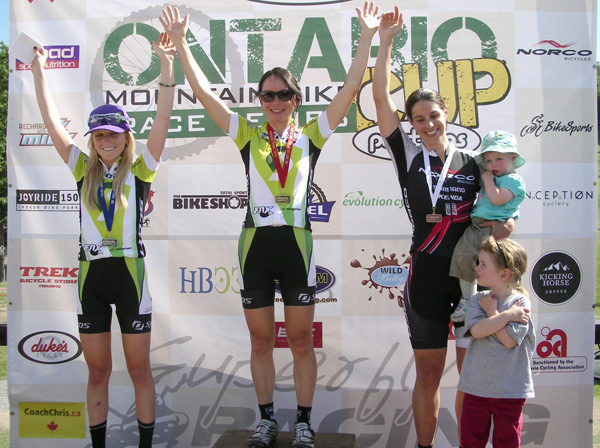 Kofman quickly took over the lead and set a pace that only her teammate could match, though Bietola tried valiantly to hang on to the pair.  Her effort to do so proved costly as she gradually faded throughout the race.

“I wanted to work on my World Cup starts,” explained Kofman, the reigning provincial champion.  “I’m pretty bad at them.  I figured I would go all out, so I led the first lap.  Amanda caught up to me and we rode together for a bit.”

On the second lap, Sin moved in front of her teammate prior to a section of singletrack, where a crash by Kofman proved decisive.  “It was super slippery up there,” explained Kofman.  “I was just riding along and boom, my bike was out from underneath me and I went down pretty hard.”

Although she was unhurt and able to continue, the resulting gap proved insurmountable, and Kofman had to settle for second.  For her part, Sin maintained a steady tempo and cruised home with a nearly two-minute advantage.

“The start was tight so I wasn’t able to move up as quickly as I would have liked to,” related the winner.  “It took me a little while to get into the position I was looking for.  But I wasn’t too concerned.  I knew there was lots of room ahead to move up.”

“It was a really good test of mountain bike skills, but also fitness,” said Sin of the course.  You need to be able to do a bit of everything (on this course). If you’re a really strong climber that’s going to help but you also need to be a good mountain biker because there’s a lot of singletrack, and being efficient through the singletrack can really pay off.”

Haviland continues to impress in her comeback.  “On the first climb four girls got away, two of them being Amanda and Mikaela, who gradually increased their lead over the course of the race.  It became a race of those two and the rest of us.  I slowly picked off a couple of people (Smith and Bietola) and ended up on the podium.” 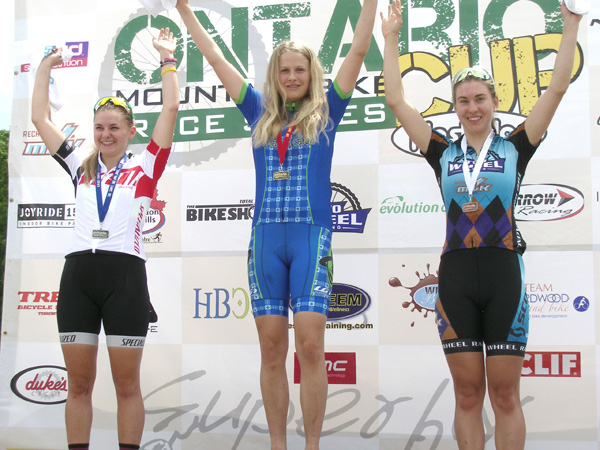 Elite Men
If you’re betting on who might get the holeshot at an O-Cup race, you would do well to put your money on Kelsey Krushel (Tuf Rack Racing), who led the field off the line, followed by Tyson Wagler (Two Wheel Racing), Mitchell Bailey (Trek Canada), Matthew Martindill (Independent) and Bretton Matthews (Norco Evolution). 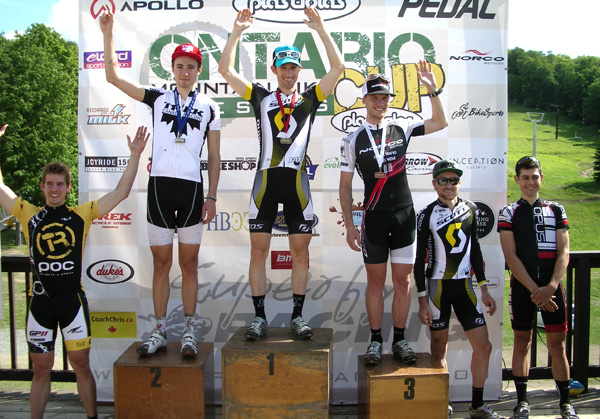 “It’s an excellent course here at Sir Sam’s,” commented Zandstra.  “It’s always been great riding here; beautiful view at the top overlooking the lake.  They did a good job building the course.”

Bailey continued in pursuit, but was reeled in by Andrew Watson (Norco Factory Racing), who had managed to overcome a bad start.  “I know Watson’s strengths,” revealed Bailey.  “So I tried my best to ride with him.  He’s really good at riding calmly and consistently.  I tried to ease it back a bit so I could attack as hard as I could on the last lap.”

Bailey’s move worked as he created a gap and managed to hold it to the finish, with Watson rolling home third.  “We were playing cat and mouse through some of the lapped traffic.  On the last lap Mitch just had a little more in the tank and was able to get a gap.  I rode a clean race; didn’t crash or anything like that.” 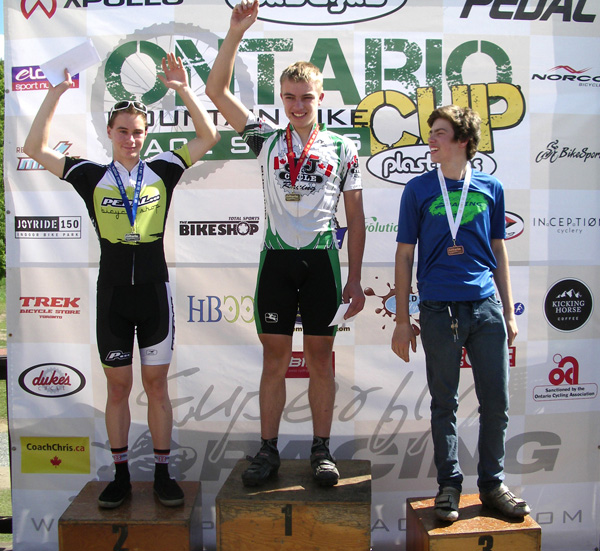 - The series shifts focus for the next two races as it shares the limelight with a pair of national level events.  First up is the Sudbury Canada Cup on July 14 followed immediately by the national championships (July 18-21) at Hardwood Ski & Bike near Barrie.  For more information on all these events visit pulseracing.ca.

- Junior expert rider Peter Disera (CSAJCC/Norco pb LG) started with the elites (and finished in eighth) in order to help him prepare for the fast start and larger field at the upcoming World Cup event in Val di Sole, Italy, where he will be participating in the Junior race next weekend.

- Mikaela Kofman has completed her university studies (for now) and is dedicating herself to cycling for at least the next year.  She has, however, applied to various professional schools and may return to combining education with racing.

- Asked about his course-design philosophy, race organizer Sean Ruppel commented that the purpose of the Ontario Cup series is to prepare riders for the next level of racing, such as Canada Cups and World Cups.  As such, he is trying to make the courses for the 1:30 starts (elites and experts) more challenging.  “Ideally I’d like to keep the (course for the) 10:00 (Sport riders) less challenging than the last two have been, but there’s just been no way to do it.  If you want to get to the next level you have to see what people are riding elsewhere.  Today was a representation of Quebec, North Shore (and) World Cup-style riding.  For the most part, 90% of this course was very average.  It’s just that extra 10% that people remember.”

- Zandstra, who recently returned from participating in two World Cups in Europe, ranked the course as a five out of ten, with ten being the most difficult World Cup course.  “There’s nothing on this course that I was scared to go into, whereas at a World Cup there’s stuff that you go ‘Oh man this is tough’.   If you look at it too much you kind of get intimidated by it.”