A trip to the spa is on the agenda for members of the Optum p/b Kelly Benefit Strategies team after Denise Ramsden held off Flavia Oliveira (Garneau Factory) in a thrilling sprint to win the fifth edition of the Grand Prix Cycliste Gatineau women's UCI road race.

A last-minute attack on a technical descent with 500 metres to go paved the way for the leading twosome, who surprised the remainder of a six-rider breakaway that formed in the final 35 kilometres of the 122 kilometre event.  Jasmin Glaesser (Tibco To The Top) finished third, ahead of Lex Albrecht (Équipe du Québec), Kirsti Lay (SAS-Mazda) and Justine Clift (West of Québec Wheelers). 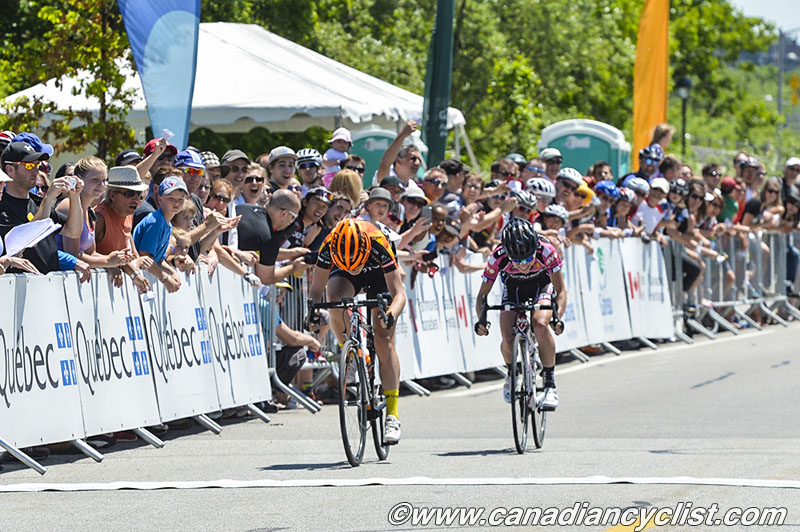 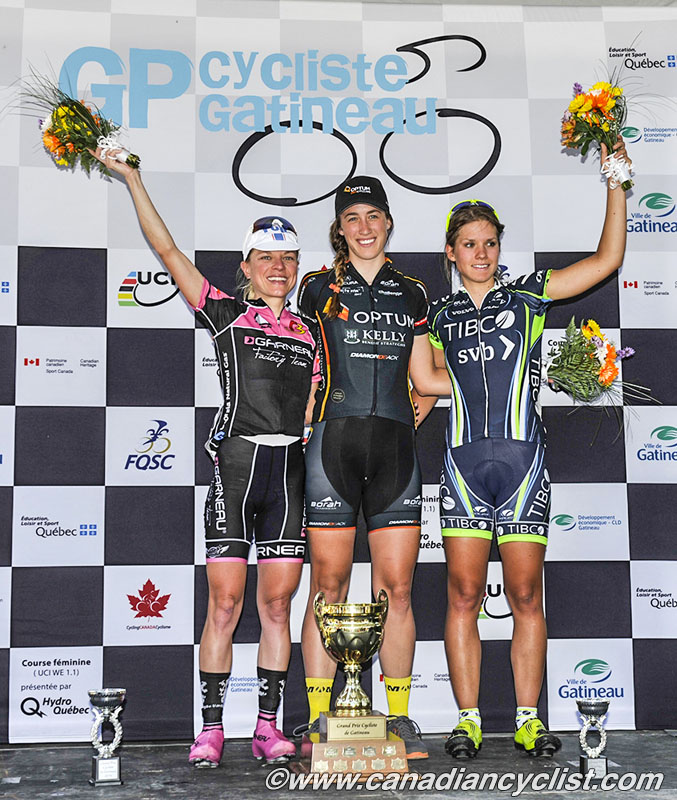 "I'm not much of a pure sprinter so I figured I had to attack from a little ways out," said Ramsden, who jumped away on a sweeping downhill highway off-ramp, a move that only Oliveira could follow.  "I got a little bit of a gap through the last corner.  I just really wanted to seal the deal for my team.  There were a lot of really fast sprinters here and they gave me a chance and I needed to finish it off."

With plenty of race experience, Oliveira expected a late move from Ramsden.  "When we realized Denise was just sitting in I figured she was going to make a move towards the end.  Everybody else was working and basically it was just positioning.  She went and I covered her and we got a small gap on the descent."

Ramsden played the sprint perfectly, however, which Oliveira generously acknowledged: "It was windy on the left side so she picked the right line.  She went against the barriers so there was no way I could overtake her on the protected side.  I tried to overtake her towards the end but once you put your nose in the wind...."

Optum-Kelly Benefits team manager Kevin Field had promised his riders a trip to a local spa as an incentive, and now he has to pay up.  Leah Kirchmann added a cherry to the icing by winning the pack sprint for seventh.

Despite notching her second podium in two days, Glaesser was subdued after the race.  "My team gave me an opportunity to ride in the break today, and when they give you that opportunity you want to be able to finish the job.  I'm a little bit disappointed I couldn't quite get it for the team today."

A total of 80 riders took the start of the UCI 1.1 sanctioned race, held on a hot day under sunny skies tempered somewhat by a strong breeze.  The course was a shorter, 10.1 km-long version of the technical route used in yesterday's Chrono Gatineau, to be covered 12 times.

Antje Thamm (Kallisto-FCV) wasted no time in kicking things off, attacking solo on the first lap.  That move was brought back by the start of lap two as the pace picked up.  Nothing significant occurred until lap four when Carrie Cartmill (Stevens-The Cyclery) prised open a 30-second gap that enabled her to win the first of three primes, but she was absorbed by the group soon thereafter.

The move seemed to have potential, gaining 37 seconds fairly quickly, but Tibco To The Top wasn't confident in Todd's sprinting ability and went to the front to bring it back.  After the catch, numerous breakaway attempts were launched, but none stuck until Ramsden attacked into a headwind on the ascending gradient out of the feed zone.  Glaesser, Lay, Albrecht and Oliveira were quick to take her wheel, while Clift waited a bit before bridging a 10-second gap to form a leading group of six.

The peloton appeared to give up at that point, and the gap grew to nearly two minutes with two laps remaining.  Having initiated the move, Ramsden was content to sit on, but almost paid a high price for doing so.  Hearing a car horn tooting behind her, she turned her head to see if it was her team manager trying to signal her.  The rider ahead of her also looked back, the pair crossed wheels and Ramsden went down.  "It was stupid on my part.  I just landed on my butt, but it was okay."  She quickly remounted and regained the break, but needed assistance from the team mechanic to fix a rubbing brake.

Once the riders from the big teams realized their lead was solid, the breakaway pace dropped.  Under the impetus of Stevens-The Cyclery the gap was reduced to 1:05.  Unfortunately for the peloton, they ran out of real estate, and the spoils went to the breakaway.

- Audrey Lemieux stepped in for the injured Karol-Ann Canuel on the Équipe du Québec.  Lemieux is training to ride as a tandem pilot for a para-cyclist.

- Following strict instructions from event organizers, team personnel in the feed zone were diligent about picking up every tossed bottle and piece of litter.  Without the blessing of the National Capital Commission, bike races could be barred from using roads in Gatineau Park, so naturally race officials are keen to keep the NCC happy.

- Special thanks goes out to France Bordeleau, driver extraordinaire, for piloting the media vehicle.  Also to our photo moto driver Kris Westwood, who kept the rubber side down and was in the right place to get the important shots.