The Canadian Road National Championships began Thursday with the Individual Time Trial for the Elite, U23 and para-cycling categories, for both men and women. Svein Tuft (Orica-GreenEdge) and Leah Kirchmann (Optum p/b Kelly Benefit Strategies) were the fastest in the Elite races, with Kris Dahl (Team SmartStop) and Jasmin Glaesser (TIBCO-To-The-Top) taking the U23 titles. 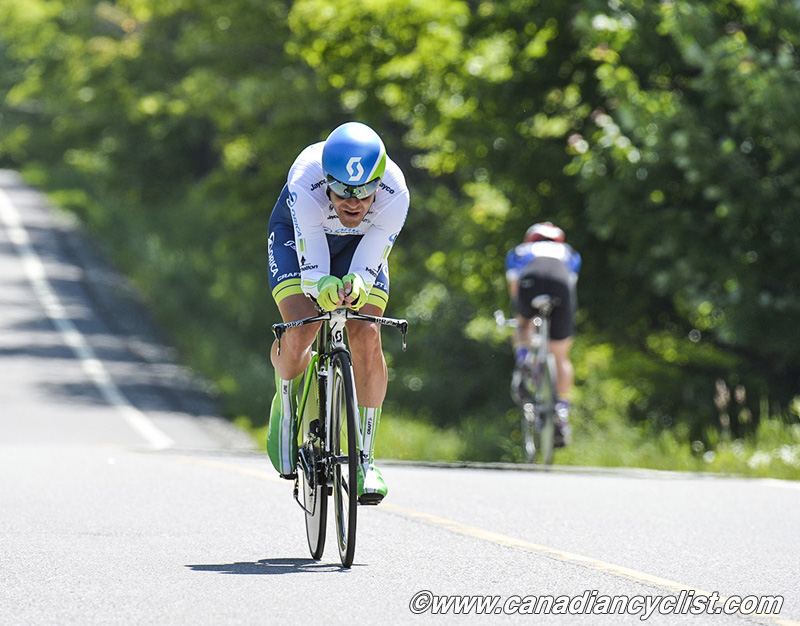 Although Tuft was an overwhelming favorite to win the race, he pointed out that it wasn't a sure thing.

"It's never in the bag. You never what you're going to get on the day. I came here really motivated. Coming out of the Giro, I had a good little rest, and worked hard coming back. I am extremely happy to come out here strong.  With the nature of a course like this, being difficult, people can go out fast the first twenty minutes. With the wind and the hills, you can have a good first half, but it's all done in the finale. For me, I was just conservative and stayed on top of it."

"It's a special thing. To race in Europe with your National colours ... it's always been special. I see this race as being a really important thing. It's a National title after all, and just like any other race, it's hard to any race in the world at the moment, no matter where you are."

Tuft passed Hugo Houle (AG2R La Mondiale) early in the second lap, and then really began to gobble up riders, catching up to his six-minute man.  Despite being caught, Houle took second with a 2-minute time deficit to Tuft, while Ryan Roth (Silber Pro Cycling) took third place.

In the women's category, Kirchmann won the race with a time of 43:30, less than three seconds ahead of Jasmin Glaesser, while Anika Todd (TIBCO-To-The-Top) finished in third place.

"It feels incredible'" said Kirchmann.  "I am excited about winning [the jersey]. The Time Trial has been a huge focus for me this year. I spent a lot of time on my bike, and I tried to do as much time trial as possible. I am very happy to see it's paying off.  I previewed the course a few days ago. It's quite a difficult course with the climbing right off the start. Since it's 30 kilometres and we don't do a lot of races this long, I knew that pacing would be a big factor in this race. It turns out I paced it well in the climbs, and was able to recover in the descents."

In the para-cycling time trial race, the tandem of Robbi Weldon of Thunder Bay, ON and Lyne Bessette of Knowlton, QC was reunited for these Championships. The duo won the gold medal in the road race at the Paralympic Games in 2012 and multiple World Championships titles prior to 2012. The Weldon/Bessette tandem rode to first place in the women tandem category.

In the men's tandem category, Daniel Chalifour and his teammate Alexandre Cloutier were the fastest of the group.

In the T category, Marie-Ève Croteau of Québec, QC is pursuing her great comeback from an injury, winning the race and reaching 110% of the Canadian para-cycling standard. Croteau has excelled on the World Cup circuit this year, and is looking strong and confident on her bike. Shelley Gautier, the current World Champion in the T1 class, finished second with 93% of the standard.

In hand-cycling, Mark Ledo of Maple, ON won the H3-4 race, while Robert Labbé of Québec, QC finished first in the H1-2 race.