Leah Kirchmann accomplished a rare double on Friday, when she took the Canadian national road title to go along with the time trial title she won a day earlier.  Kirchmann was joined on the podium by Optum-Kelly Benefit Strategies team mate, and 2012 champion, Denise Ramsden in second, with Leah Guloien (Trek Red Truck) in third. 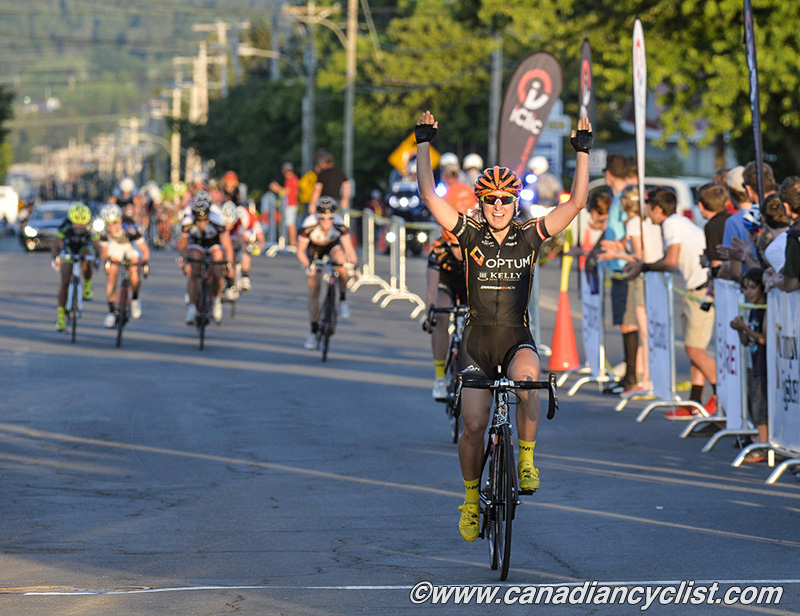 The peloton of 57 women started the 119 kilometre road race in downtown Lac Mégantic, then rode just over 20 kilometres to the 15 kilometre Mont Morne circuit. Racers had to cover five laps of the loop prior to returning to Lac Mégantic.

Early in the race, two cyclists broke away together until the first climb of the Mont Morne, a two-kilometre wall with a maximum slope of 11%. Early in the first ascent, the two-girl breakaway was quickly reduced to a single woman, Megan Rathwell (IRC p/b Robert Cameron Law), who stayed alone at the front until the fourth lap of the circuit. Rathwell, after a tremendous solo effort, was brought back in the 72nd kilometre. 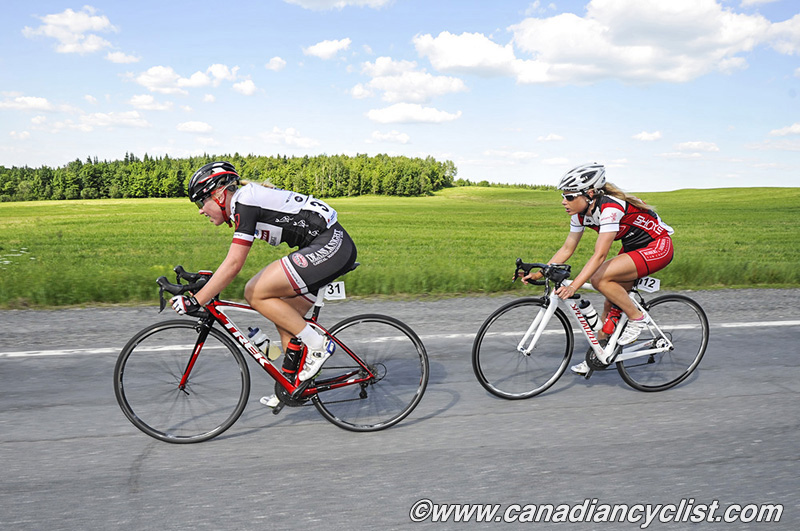 Behind, the climb was playing its expected role, with riders shed every lap as the top teams of Optum and Tibco set a steady tempo up the climb.  The group was reduced less than expected, and Rathwell left out alone in front longer than expected, when a number of top riders suffered mechanicals and crashes, reducing the speed of the chase. 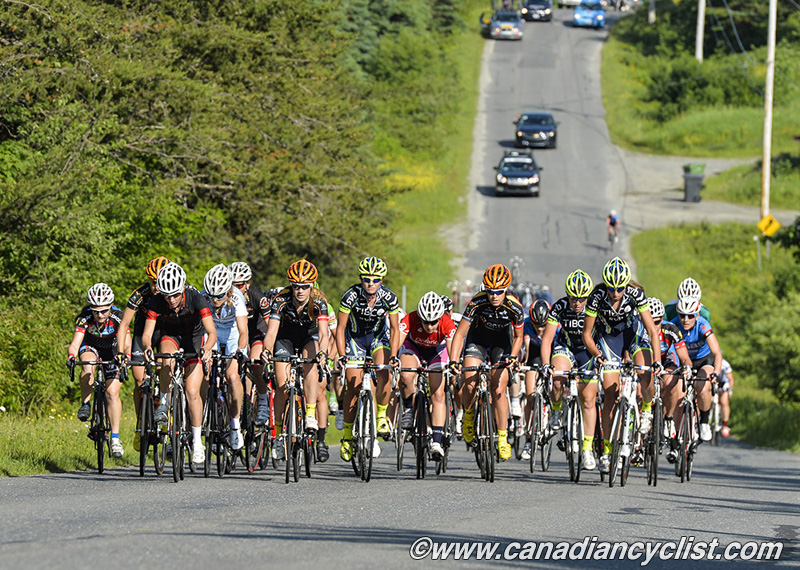 In Optum, both Kirchmann and Annie Ewart suffered mechanical problems, while Tibco-to-the-Top's leader, Jasmin Glaesser was knocked off her bike on the second time up the climb, hitting her head and suffering brake problems, necessitating a bike change.  All of these misfortunes meant that the planned aggression by Optum did not happen.

Leaving the circuit, and with 20 kilometres to go, only about 20 cyclists were left in the at the front of the race. Multiple attacks were launched by Optum and Tibco on the run in to the finish, but all were brought back. The group remained together until the final corner, leading into an uphill finish with 500 metres to go.

Optum had planned for this eventuality, according to Kirchmann, with Ewart leading both her team mates Ramsden and Kirchmann out of that corner, allowing Kirchmann to launch off Ramsden's wheel in the final 500 metres.

The road race title is Kirchmann's second win of the week, and third consecutive title, with the Criterium title in 2013. "I couldn't have asked for a better Nationals so far. I've surprised myself every day. Obviously, I'm going for a third win on Sunday."

"We were comfortable with the race coming to a bunch sprint. My team has a lot of faith in my sprinting abilities. We did expect a finish with a smaller group, given the difficulty of the climb. My team mates set me up perfectly.  When we came out of the corner I saw that we had a gap, so it made it easier to sprint for the finish."

In U23 category, Gabrielle Pilote-Fortin of Team Quebec was the first to complete the course, finishing fifth overall. Jasmin Glaesser finished second in the U23 standings (sixth overall), followed by Kinley Gibson of Trek Red Truck Racing (seventh overall).

Earlier in the day, the Para-cycling road race titles were awarded across seven categories.  The para-cycling resurgence comes after years of recruitment, development and international success to find new talent across the country, thanks to the involvement of the provincial associations.

Alberta, among many other provinces, stepped up and brought a large group of riders to the 2014 edition of the Canadian Championships. Quebec, Ontario, New-Brunswick, Saskatchewan, and BC were also represented in these Championships.

The Fédération québécoise des sports cyclistes was the pioneer in para-cycling development, and Équipe du Québec continues to be strong contenders in most of the categories, thanks to the early passion and vision of Louis Barbeau, who occupied the role of President of the para-cycling commission at the Union cycliste internationale during the last four years.

Thanks to this growth in the development of para-cycling, new athletes have created a feeling and atmosphere of high performance, pushing the current elite riders to a new level. Notably, in the men's C category, Michael Sametz of Calgary, AB, took these Championships by storm, winning both time trial and road race titles in his first appearance in a Canadian Road Championships. In both races Sametz beat Jaye Milley, a World Championship and World Cup medallist. Ashley Wilson, racing in his second Canadian Championships, also stepped on the podium in both races.

This week, also saw the return of the prolific tandem team of Robbi Weldon and Lyne Bessette, who took both the time trial and the road race titles after being separated for almost two years.  However, Weldon and Bessette were challenged strongly by the team of Shawna Ryan and Audrey Lemieux, who only missed out on a possible upset after dropping their chain in the final lap. Mathieu Daigle, in his first Canadian Road Championships with pilot Pierre-Olivier Boily, won the men's tandem road race, thanks to an early solo breakaway.