The 2014 Canadian Mountain Bike Cross-Country Championships will be held again this year near Barrie, Ontario, at the Hardwood Ski and Bike resort. Both Ontario athletes Derek Zandstra (Kingston, ON/Scott-3 Rox Racing) and Emily Batty (Brooklin, ON/Trek Factory Team) will be defending their Canadian title as the reigning champions. 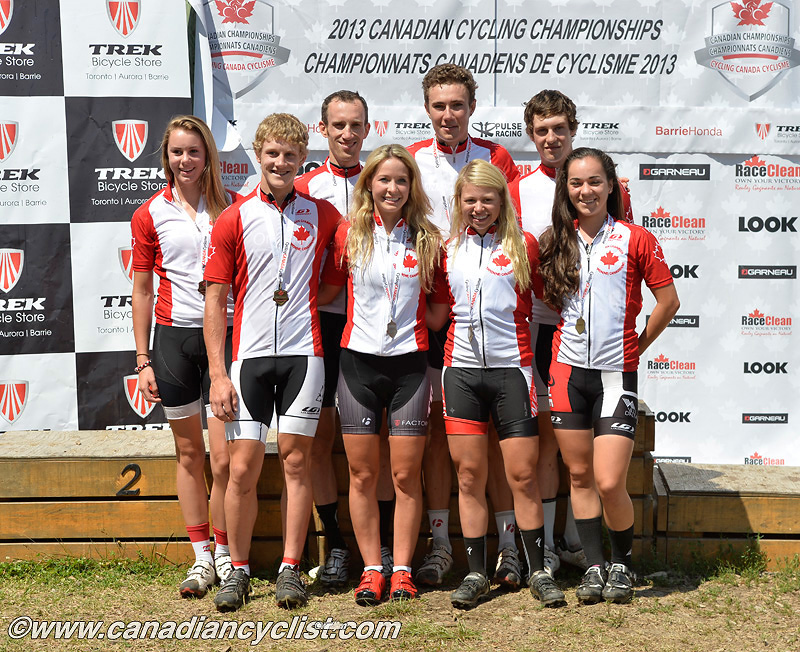 "We had a spectacular championship in 2013, and are looking forward to racing at Hardwood Hills for the 2014 edition of the Championships. The venue is ideal to set up a close battle to the end, in all races," said Nicholas Vipond, Competitions coordinator at Cycling Canada. "We have all the elements in place to create a memorable weekend of racing, and crown new champions that will carry the maple leaf jersey across the world."

"We are excited to welcome the best of the best mountain bikers to Hardwood Ski and Bike," said Glenn Meeuwisse, head of the Organizing Committee. "We hosted a successful event in 2013, and we have worked relentlessly to find ways and improve the event for 2014. Everyone who comes in a race this event will appreciate the challenge and the difficulties that the course offers to Canada's elite athletes and stars of the sport."

In 2013, Derek Zandstra surprised both his teammate Geoff Kabush (Courtenay, BC/Scott-3 Rox Racing) and defending Champion Max Plaxton (Victoria, BC/Cannondale Factory Racing team) to capture his first Canadian Elite Title, after years of hard work and determination. Zandstra came in hot form at the event, and took advantage of his knowledge of the course to claim the victory. Expect the race in 2014 to be another nail-biter between the three World Cup riders, along with other riders such as Raphael Gagné (Québec, QC/ Rocky Mountain Factory Racing), who is having a great season to date.

In the women's elite race, Canada's reigning Champion Emily Batty will have a fierce competition from rival Catharine Pendrel (Kamloops, BC/Luna Pro Team), who missed last year's Championships due to a broken clavicle. With both athletes healthy, the battle will be fierce, and certainly not to miss.

Both defending Champions, Batty and Zandstra, have shown they are in top form heading to the championships weekend by winning the Canada Cup race held in Sudbury this past weekend.

As in 2013, there will be medals and jersey awarded to the winner of each race the Cadet (U17), Junior (U19), Espoir (U23), Elite and Master categories for both Men and Women, as well as to the winner of the Open Team Relay.

The traditional cross-country race will be held on a course with numerous changes from last year, on Saturday, July 19th.  The Championships will serve as a test event for the Pan American Games mountain bike races to be held here next summer. The six kilometre loop offers some arduous climbs, treacherous descents, and rock gardens.

In addition to the cross-country, these Canadian Championships will for the second consecutive year feature the Eliminator race on Thursday (July 17th), an elbow-to-elbow sprint race held in a single elimination format. In 2013, Léandre Bouchard (Alma, QC/Cycles Devinci) was the fastest sprinter of the men and won the Canadian title. Jean-Ann Berkenpas (Xprezo-Borsao Factory Team) had the race of her career in 2013 and captured her first Canadian Championships title in the women's Open race.