Heavy rain washed out Saturday's pre-ride, but Sunday dawned dry and sunny.  The challenging course featured punchy, demanding climbs with a good mix of both technical and flowing singletrack.  "It still felt like Mountainview," said Watson, who has raced all the Ontario Cup races ever held here.  "It still felt like the same trails, just in a different order."

Thanks to the predominantly sandy soil, the track was tacky if not dry by mid-afternoon, though slippery roots and slick rocks in darker forested sections awaited unsuspecting riders.

Elite Women
Elyse Nieuwold (Team Spoke O'Motion) led the field into the first singletrack ahead of Bietola and Victoria Giangrande (Trek Store CC).  A chain problem forced Bietola off her bike, allowing Nieuwold a bit of breathing room, but Bietola was able to pace herself and returned to Nieuwold's wheel by the end of the opening lap.

"I was going to hang on for a bit," explained Bietola, "but I said 'I'm feeling good; I'm going to go for it.'"  Once in the lead she did not look back, cruising to a solid victory.  Bietola credited her recent rides at the World Cup races in Mont Ste. Anne and Windham for improving her race fitness:  "It definitely brought my intensity up.  Going hard (today) wasn't an issue.  It felt natural."

Rolling home in second, Nieuwold also recalled her participation in the North American World Cups:  "I feel like I learned a lot and it was a really motivating experience.  I know how hard I have to work to get to where I want to go." 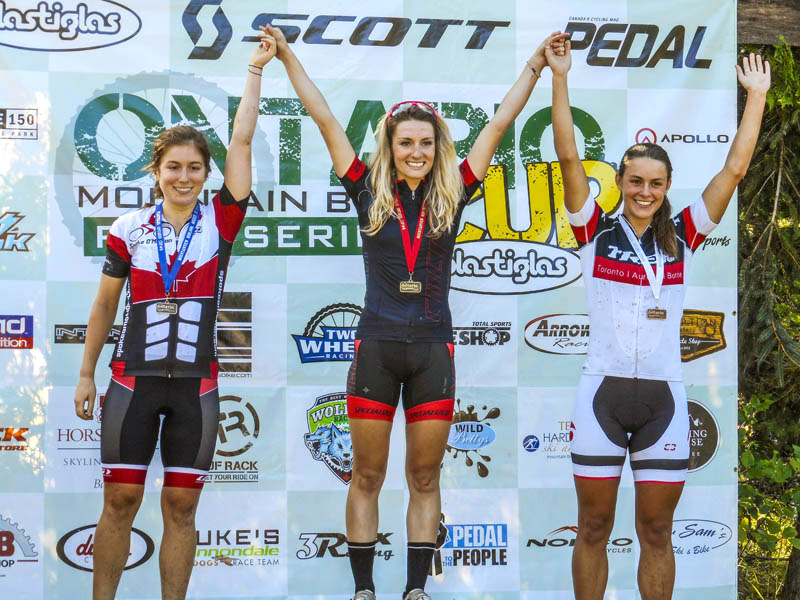 On the verge of completing a master's degree in civil engineering at Queen's University, Giangrande kept the leaders in sight for the first lap, but thereafter used a different tactic to keep the speed up on her way to third place. "I was on my own and trying to stay with any guy who passed me to try and give myself a bit of extra energy." 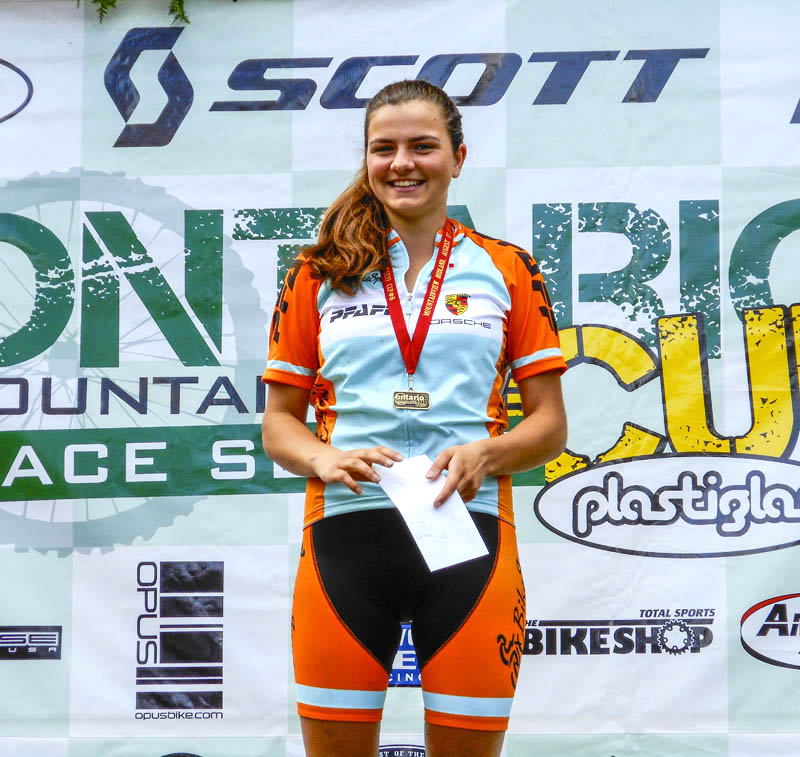 Elite Men
Jacob McClelland (AWI Racing) and Peter Disera (Norco Factory Team) were the early leaders, but it was local resident Davis Ross (Team Bikeland) who made a strong move to establish himself at the front of the race.

Having ridden more than 20 laps of the course during recent events at the venue, Ross was by far the fastest in the singletrack and on the downhills, which propelled him into the lead.  "I was just kind of there off the start and followed wheels to the top.  I knew I could gain some time on the rock garden so I went ahead."

While McClelland settled into his own rhythm, and Martindill was slowed by chain problems, Davis continued to set the tempo. "I was just trying to ride my own pace and not go too hard on the climbs.  I figured they would catch me eventually."

Disera and Watson eventually made their way up to Ross, but Watson wasn't feeling entirely comfortable. "There were a few points where I thought Davis and Pete were gone but I was able to steadily roll up to them.  I did that a couple of times." 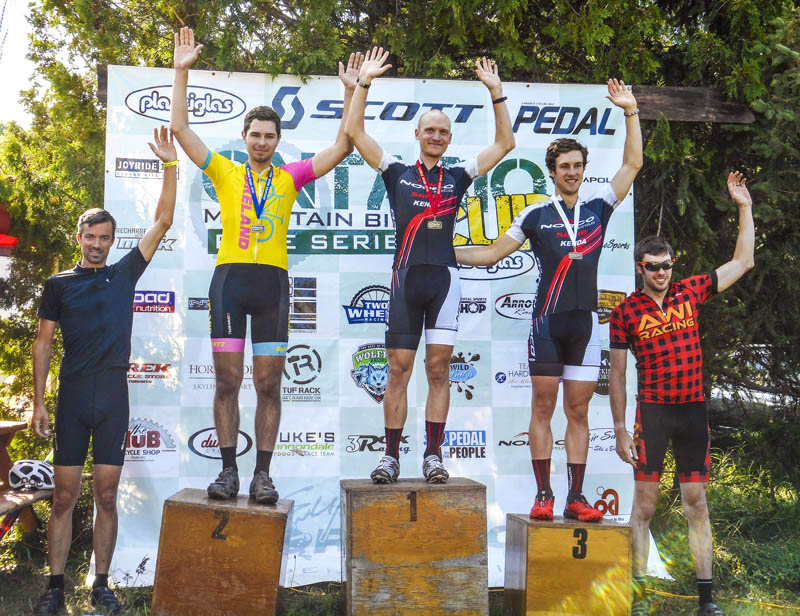 As the race progressed, however, Watson began to feel better, and by the start of the final lap, Ross found himself in a Norco sandwich, with Disera leading and the veteran Watson following, but looking over his shoulder.  "On the last lap Matt Martindill wasn't too far behind us," explained Watson.  "I can't count that guy out.  I said that to them (Ross and Davis) and they didn't react and I was like 'I'm going to try and go hard here'.  After the first long piece of singletrack I attacked and got a gap."

Neither Ross nor Davis could respond, and Watson was on his way to his first O-Cup win of the season.  Ross went ahead on a stretch of singletrack, gaining enough ground on Disera to comfortably take second, with the first-year U23 finishing third ahead of Martindill in fourth and McClelland in fifth. 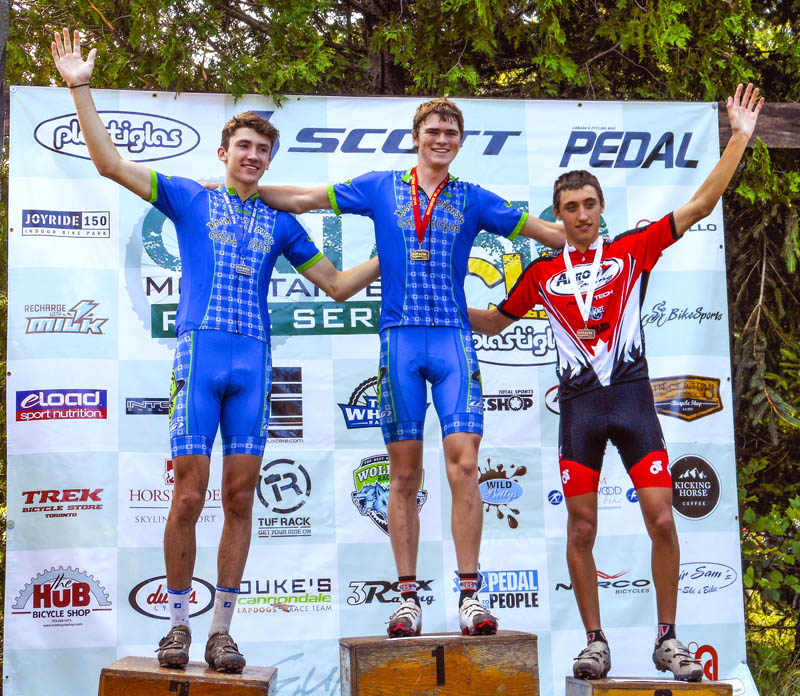 - Not having raced since the National Championships due to a shoulder injury prior to the Mont Ste. Anne World Cup, Disera was pleased with his performance and fitness. "It took me a bit to get the wheels back underneath me and be able to race the singletrack again.  The shoulder is feeling good.  I was able to pre-ride without pain.  It feels good now (post-race)."  Though he admits to lacking some race fitness, Disera feels that his overall fitness is good, and continues to prepare for the upcoming World Championships.

- Also looking ahead to the Worlds are Soren Meeuwisse (Trek Canada) and Paige Foxcroft (CSAJ pb Norco/LG), who both raced with the Cadet Expert Men in hopes of experiencing an intense start and more aggressive racing in a larger field.

- After accomplishing a personal goal of finishing on the lead lap at a World Cup race, Mandy Dreyer (TUF RACK Racing) was unable to take the start at Midland due to a sprained ankle which she suffered in the morning pre-ride.

- Illness and injury have prevented Laura Bietola from having the season she had hoped for, but her win was a positive sign. "Today I'm really happy with my race.  I was able to ride to my potential."

- The Provincial Championships are the final event of the O-Cup mountain bike series.  Circle September 21st on your calendar for the event, which takes place at Horseshoe Valley resort.

All other category results