Australians Rebecca Henderson and Dan McConnell, both racing for Trek Factory Racing, dominated the women's and men's short track races at Bonelli Park.  Three Canadians made it onto the podium, with US Cup XC series leader Emily Batty (Trek Factory Racing) fourth and Catharine Pendrel (Luna) fifth in the women's event and Raphael Gagne (Rocky Mountain) fifth in the men's.

Larissa Connors (Ridebiker Alliance) got things underway in the women's race by leading the first two laps of a twenty-minute plus three laps race. A full complement of Luna Pro racers (Pendrel, Georgia Gould and Katerina Nash) lined up behind her, followed by Jenny Rissveds (Scott/Odlo), Kate Courtney (Specialized Factory Racing) and Emily Batty and Henderson. 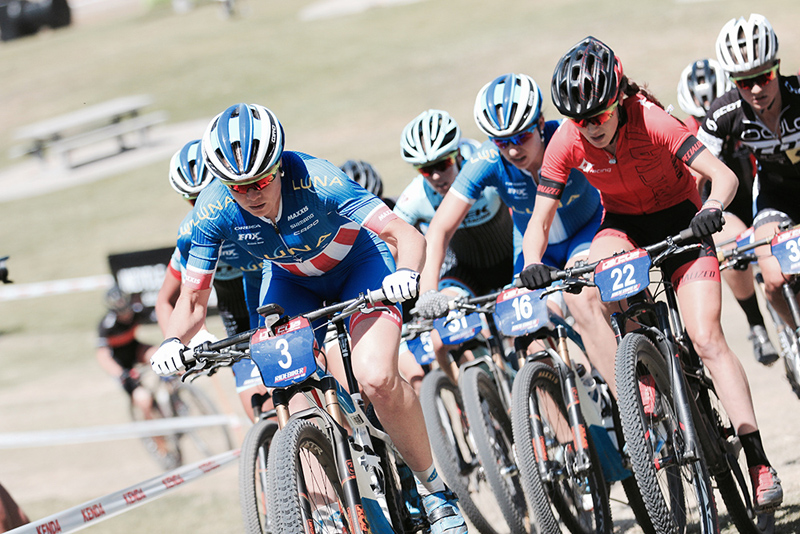 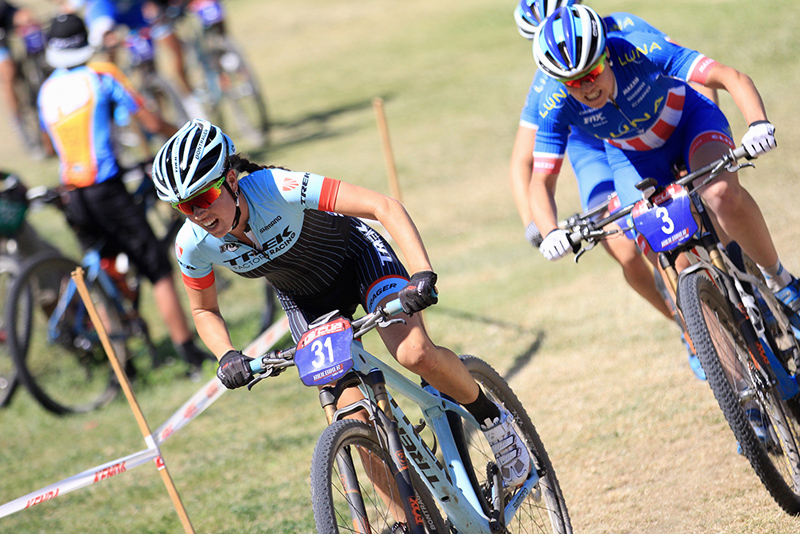 The Luna Pro Team took over affairs on the third lap, with Georgia Gould and Katerina Nash taking the lead before Chloe Woodruff (Stans NoTubes/Niner) launched a serious attack. By the end of the next lap, the group had reformed to about fifteen, with two more joining by the end of lap five. It was here that Nash was seen off the back of the lead group, evidently having chain troubles, but determined to make contact with the leaders and chasing desperately to do so.

The seventh lap was also a prime lap, which Henderson won thanks to a strong charge that saw her build up a large lead and, at the same time, blew the front group to bits. This move saw Luna down to just Gould and Pendrel in the front group, with Connors and Andrea Waldis (Luna Pro Team) chasing back on at the end of lap seven. 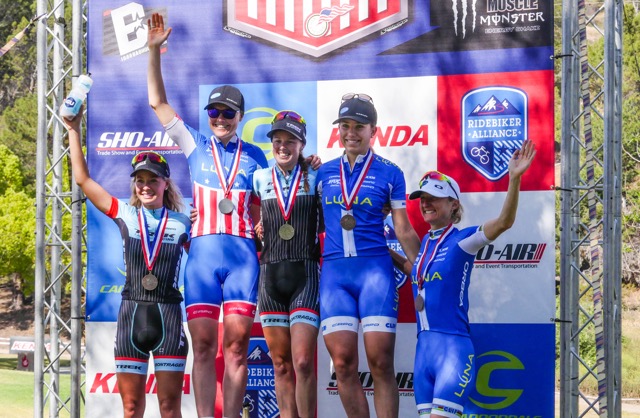 With just three to go, the front group sat up just long enough for Nash to rejoin.  Connors put in one more dig on the pavement with two to go and the chasing group down to just ten. On the last time around, the lead group passed the grassy descent in tatters, the result of a crash by Rissveds. On the final lip just before the pavement, it was Henderson who took the inside line leading to the pavement and taking the win from Gould and Waldis.

The men lined up for the same twenty-plus-three format as the women and right off the bat Todd Wells (Specialized Factory Racing) was in front with the hole shot, with teammate Sam Gaze just behind. The two Speclalized riders animated the first few laps, mixing it in the front along with Raphael Gagne, Keegan Swenson (Sho-Air/Cannondale) and Colombian Hector Fernando Riveros Paez (Raleigh-Clement). 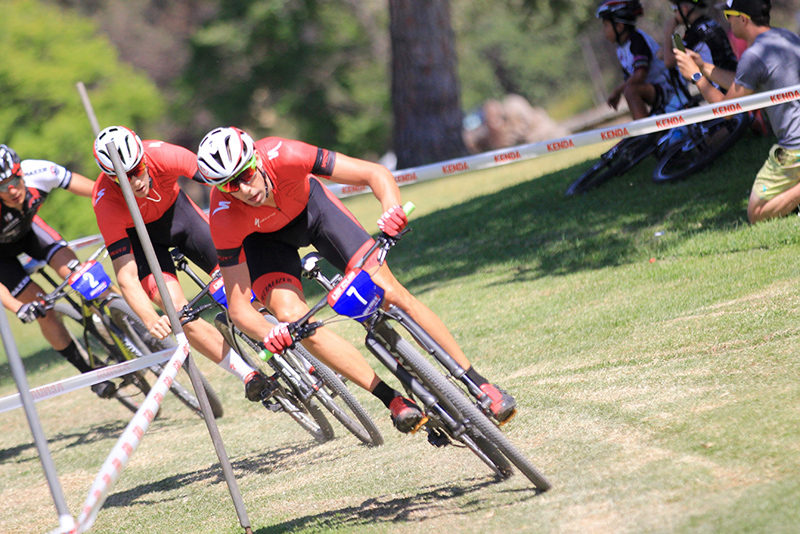 By the end of the fourth lap, cross country winner Nino Schurter (Scott/Odlo) moved his way to the front along with Sergio Mantecon (Trek Factory Racing) right before McConnell made his presence known with a hard charge on the pavement section after the start/finish.

After lap five there was a general regrouping at the front as reigning US Short Track Champion Stephen Ettinger (Sho-Air/Cannondale) made his presence known in the front. Just before the prime lap, Estonian Martin Loo (Hawaii Express) put in a huge effort and built up a lead that took him through the prime lap and lasted for another two laps until he was pulled back by the efforts of the chase group being led by Wells. 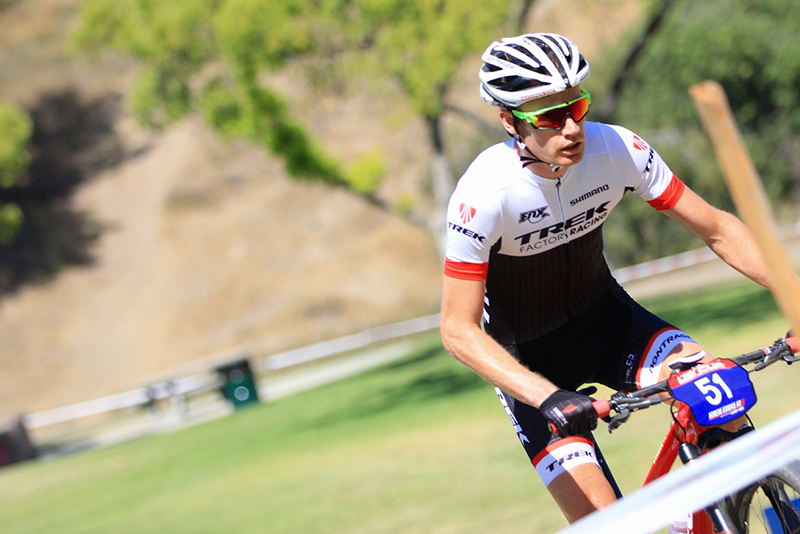 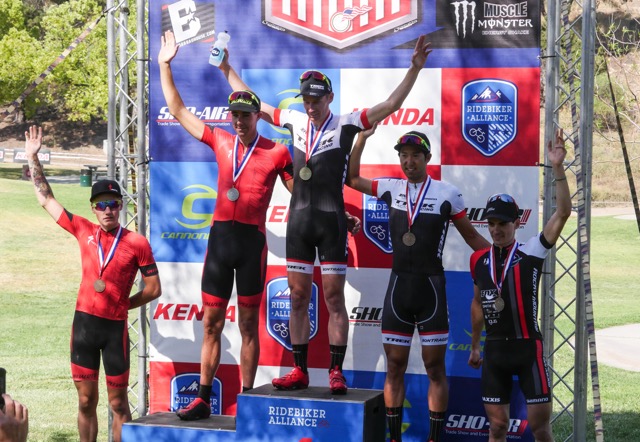 On the final timed lap, McConnell put in his decisive attack, quickly building up a lead that hovered at five seconds for two laps, then extended again on the grassy descent to the midfield for the last time. Weaving his way through the grassy midfield, McConnell had enough time in hand to take it easy and roll into the finish. Wells crossed the line in second a few seconds later, ahead of Kohei Yamamoto (Trek Factory Racing) and Junior XC World Champion Simon Andreassen (Team Webike-DMK). US Cup XC overall leader Raphael Gagne rounded out the podium in fifth.

The USA Cycling US Cup presented by Sho-Air Cycling Group series will continue with Round 4, a UCI Category C3 race, at the Sea Otter Classic in Monterey, California, on Saturday, April 18th.