The blistering pace matched the temperatures for the 44th edition of the Preston Street Criterium in the heart of Ottawa’s Little Italy Sunday.

The marquis events for the elite women and the elite men were deservedly the highlights of the day, as both races went to the wire and crowned first-time champions.

Racing got underway at 10 a.m. as the elite 3/4, junior and cadet men took to the one-kilometre circuit, with Jesse Jarjour (613 Cycling) soloing away with the top prize.

Next up were the masters 2/3 men, and former mountain bike masters world champion Bill Hurley (The Cyclery Racing) earned a trip to the top of the podium with a sprint victory.

Elite Women
The elite women were up next for one hour plus five laps. With no former winners on the line it was a wide-open race. The Cyclery-Opus team looked the strongest on paper, but they faced a strong challenge from Stingray/Trek/Lacasse from Boucherville, Que.

The Cyclery-Opus decided the best defence was a good offence and went on the attack right away, sending riders up the road one after the other. The Stingray team and American Chelsea Knapp (H+H Racing) covered all the moves until Miriam Brouwer (The Cyclery-Opus) finally got away cleanly after seven laps. But she never had more than 15 seconds over the peloton and was reeled back in seven kilometres later.

But the gap stalled there, and after 12 kilometres off the front Flynn was chased back by a peloton controlled by Stingray, who then tried to send Hélène Pilote-Fortin up the road, to no avail. The pace dropped for a few laps until Brouwer hit the front with five laps to go, stringing out the peloton and allowing her teammates to organize the sprint behind. Ariane Bonhomme (The Cyclery-Opus) emerged from final corner in the lead and held off Knapp at the line, with Flynn finishing third. A disappointed Frédérique Larose-Gingras was the top Stingray rider in fourth.

The win came as a surprise, according to Bonhomme. 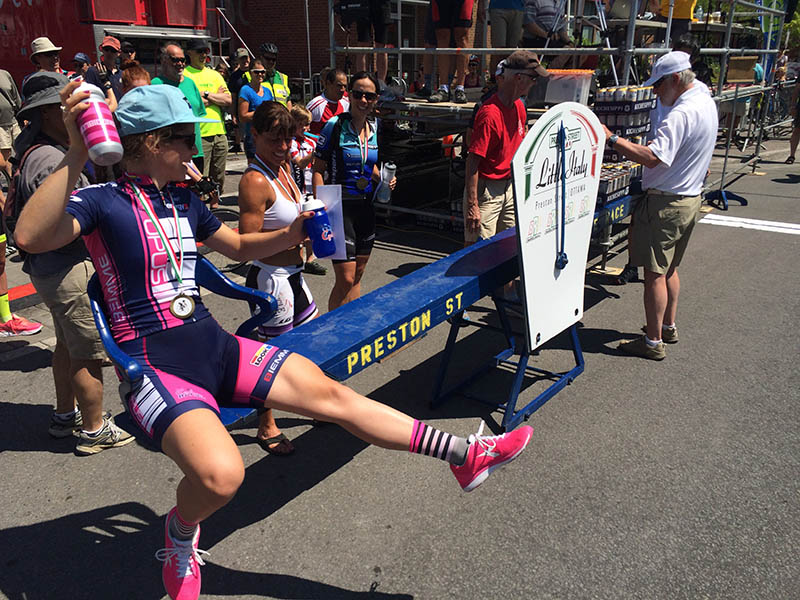 Ariane Bonhomme gets her weight in beer.

“We had to change tactics because Emily (Flynn) was our designated sprinter, but she was tired from the breakaway,” she said. The national track development team rider took home a $1,000 first prize and her own weight in Kichesippi beer.

Elite Men
After a break for the kids’ races, the elite men took to the course for 75 minutes plus five laps. It was another wide-open race, with only one former winner (Osmond Bakker) on the line and a long list of contenders from Toronto, Montreal and Ottawa gunning for the title.

With Toronto’s Real Deal/D’Ornellas/Garneau patrolling the front, none of the many breakaway attempts stuck until 15 minutes in, when Australian Darcy Woolley (the only rider from the Garneau Quebecor team) took off solo and quickly gained 20 seconds.

Two chasers took off after him – Brad Bradford (RealDeal) and Aaron Thomas (NCCH p/b Dec Express) but they were caught back after two laps and, 27 minutes into the race, Woolley’s lead was just eight seconds. But the pressure of the chase forced three riders – Eric Johnston (NCCH), Mark Brouwer (Neworld Cycle) and Anton Varabei (RealDeal) off the front, and they quickly joined Woolley to make a front group of four.

With the lead hovering at just 15 seconds, another chase emerged: Matt Surch (Tekné Cycle Club) and Laurent Gervais (TRJ Telecom – Desjardins Ford). The pair dragged themselves across the gap in the space of about four laps, and once the front group became six strong the peloton was 35 seconds down.

There was no well-organized chase behind, and though the gap briefly dipped back to 27 seconds it quickly grew back out to 45 seconds after 50 minutes of racing. The chasers held them there for the next 10 minutes or so, but the elastic finally snapped and the lead jumped to a minute at the one-hour mark.

In a do-or-die effort, Marc Boudreau (The Cyclery Racing) jumped clear of the pack, but his move failed to make a dent in the gap and he was brought back after a couple of laps, setting up a counter attack by Jean-Sébastien Perron (LowestRates.com), Logan Cornel (Independent) and Ed Veal (RealDeal). Cornel was quickly dropped, and Perron couldn’t hang on after a few laps, so after one hour and five minutes we had a break of six, Veal chasing at 35 seconds and the peloton on the verge of being lapped at 1:07.

With the pack in sight, the breakaway riders looked as though they were throttling back to avoid the risky business of lapping the field, but with Veal closing in to just 30 seconds at the 1:10 mark, the prospect of two RealDeal riders stacking the break was too much. With the field lapped, the breakaway riders went straight to the front to keep the pace high, but now they had to deal with the complication of doing their final sprint in the middle of a bunch sprint. 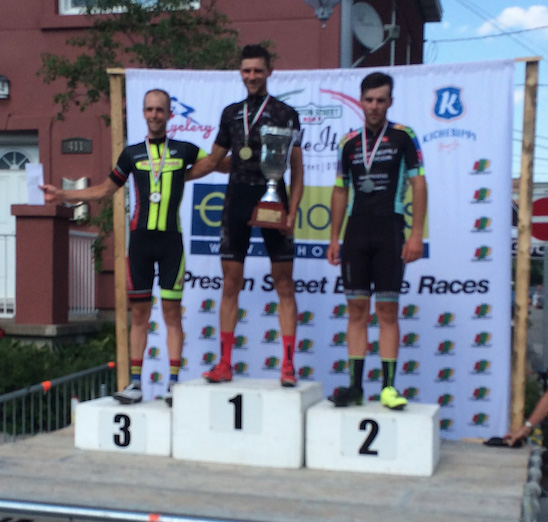 And complicated it was: Varabei benefited from the help of his lapped teammates to take the win ahead of a frustrated Woolley and Brouwer, while Surch overcooked the final corner and slid out, taking Johnston and Gervais with him. As a result, Veal – who was 40 seconds behind the pack at that point – passed all three riders on the ground to finish fourth.

For Varabei, 31, the win is a boost to his career. After racing for the Garneau Quebecor UCI team in 2015, he found himself on the regional RealDeal squad for this season.

“We hope to find the sponsorship to make RealDeal a UCI team in the near future,” said the former mountain biker, who moved to Canada from Belarus as a teenager. No doubt, the $1,000 first prize and his weight in Kichesippi beer will help, too.

The Preston Street Criterium will be back next year on its traditional Fathers’ Day date: Sunday, June 18, 2017.

The organizers would like to thank all the volunteers, businesses, fans and competitors who helped make this event a success. And thanks again to Rogers TV – stay tuned for the broadcast dates for this year’s event.

Report and photos supplied by organizer