Team Canada had a strong finish on Sunday at Round 3 of the Track World Cup in Cali, Colombia, with a bronze medal in the Women's Team Pursuit.  The team also recorded three other top-10 results for the day.

After qualifying in second place for the Team Pursuit on Saturday, Canada set the third fastest time in the first ride on Sunday, putting them up against France for the bronze medal race.  The team of Rio bronze medalist Laura Brown, Steph Roorda, Kinley Gibson and Ariane Bonhomme were only a few hundredths of a second slower than their previous ride, despite strong breezes gusty across the open air track. 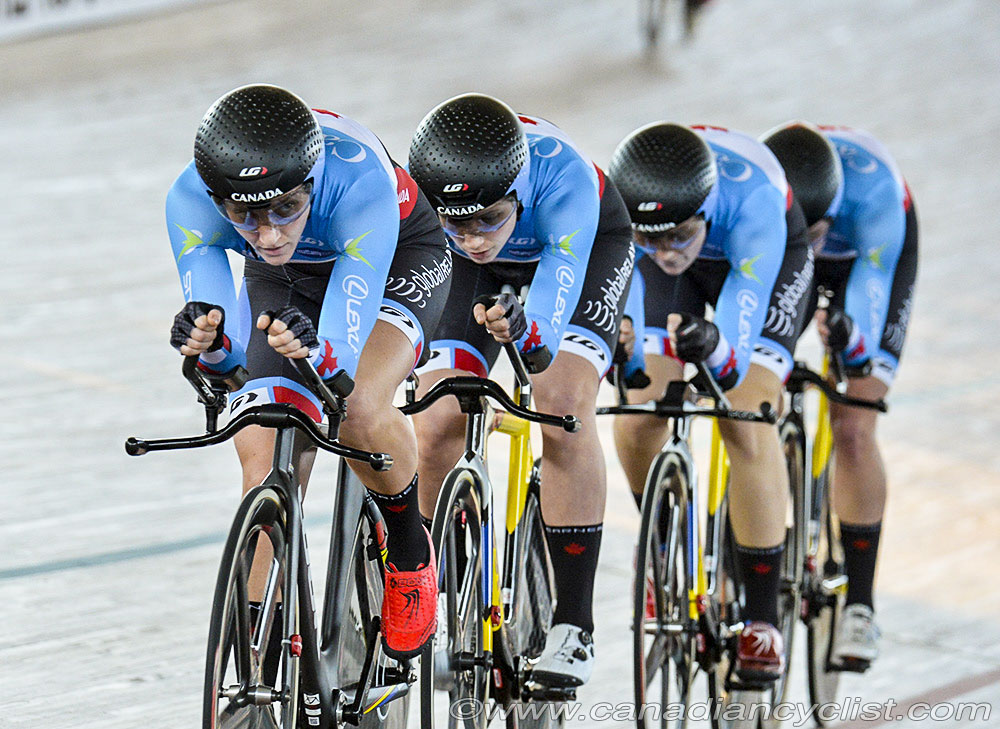 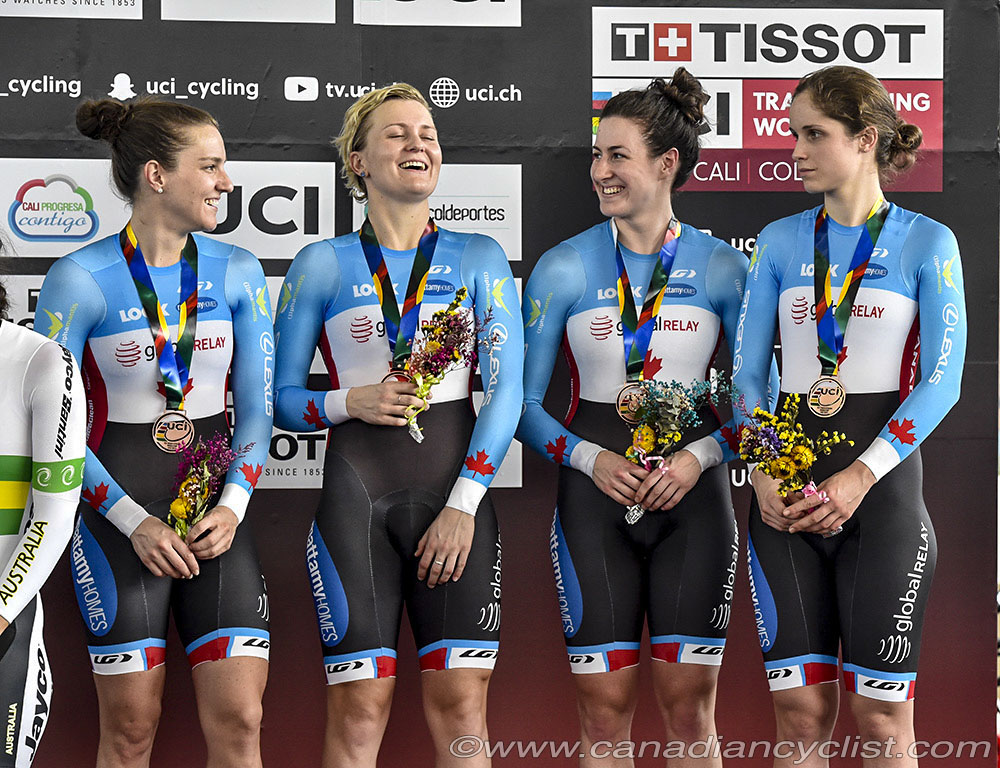 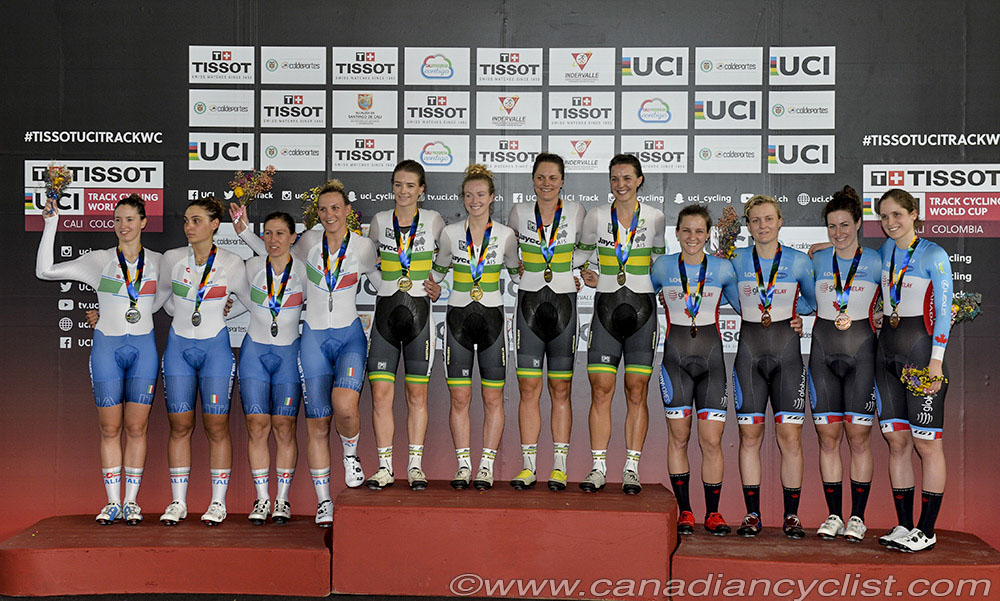 "It was a big day but very exciting," said Bonhomme.  "It took us a couple of rides to figure out how to manage the first part of the race.  We have never ridden together as a team - Kinley and I have ridden on the NextGen team, but we've never trained with Steph and Laura, so the first two rides we started a bit fast and did have so much left for the last kilometre, but we nailed it down in the final.  It was perfect."

In the Men's Sprint competition, Hugo Barrette qualified eighth with a time of 9.952 seconds and won both his sixteenth and eighth final rides before finally succumbing to Pavel Yakushevskiy of Russia in the quarter final round.  Yakushevskiy would eventually take the bronze medal.  Barrette finished the event ranked sixth overall. 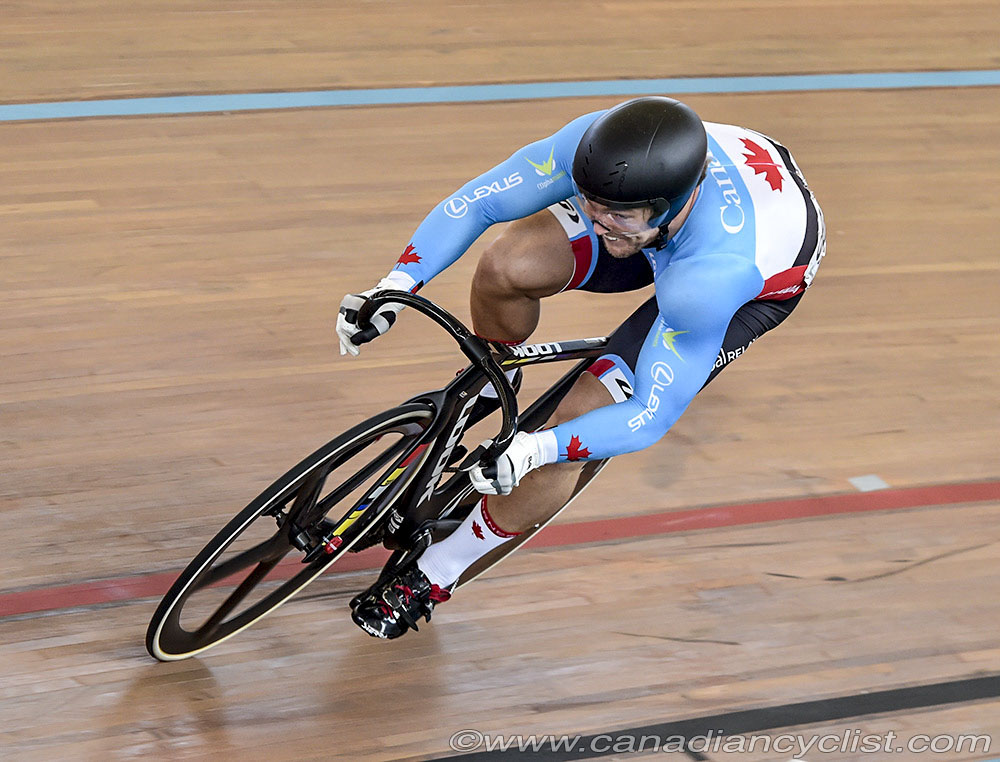 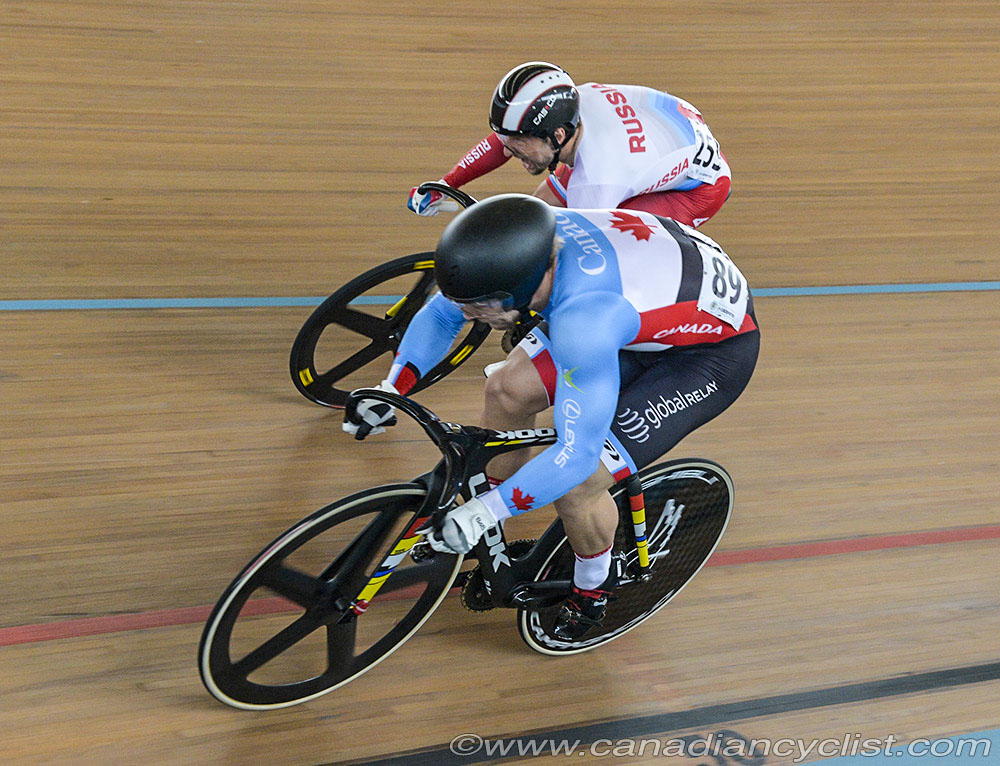 "I came into the event after a hard day yesterday with the new format Keirin, which took a lot of energy," said Barrette.  "I still finished sixth, so without the Keirin who knows.  I'm a little rusty; it's been nine months since I've ridden it at this level.  I had some mismanagement of my legs out there, so I can see myself winning in the future."

Kate O'Brien followed up her fifth place in the Women's Sprint by taking eighth overall in the Women's Keirin.  After failing to qualify in the first round, she won the Repechage to make it to the second round, before finishing second in the ride-off for 7th to 12th places. 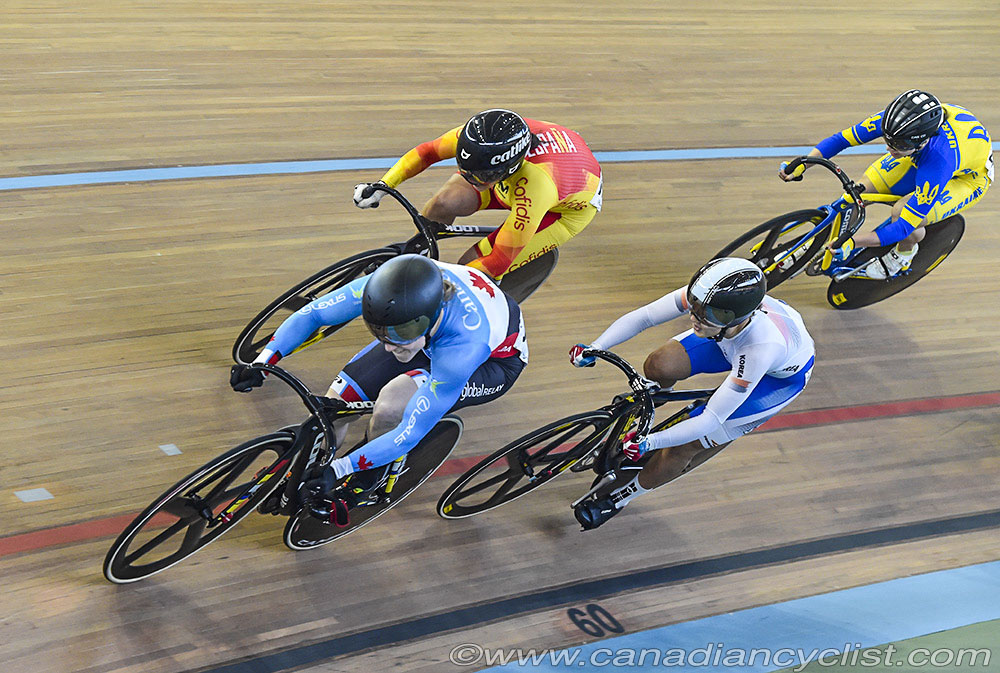 "I wasn't really sure of what to expect," said O'Brien.  "I've done the Keirin at the Olympics and world championships, but never at a World Cup.  I can't really complain; it's my first competition back [since the Olympics], and I had top-10 finishes in everything.

Stefan Ritter finished eighth overall in the Men's 1000 metre Time Trial.  Ritter, who just joined the Elite ranks, was the Junior world champion in the event last year and holds the Junior world record for the distance.  He has now moved to the elite ranks. 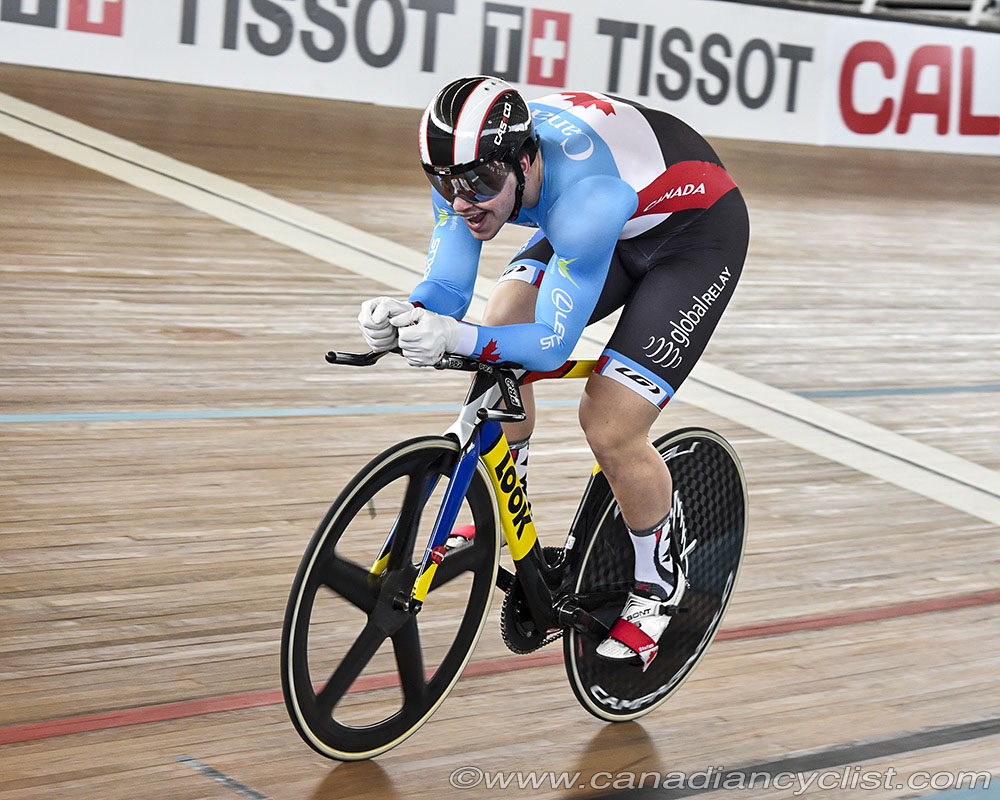 "It was very exciting, but also very nerve wracking," admitted Ritter.  "My first goal was to get into the top-8 for the final, and I did.  In the final I wasn't as good as I expected or wanted, but I can't really complain about a top-8 at my first World Cup."

The final Canadian ride of the day was by Team Pursuit rider Ariane Bonhomme, who began the Points Race barely 30 minutes after finishing the Team Pursuit final.  Bonhomme, racing in her first World Cup Points Race, was aggressive early in the race, scoring points, before fading slightly to finish 15th. 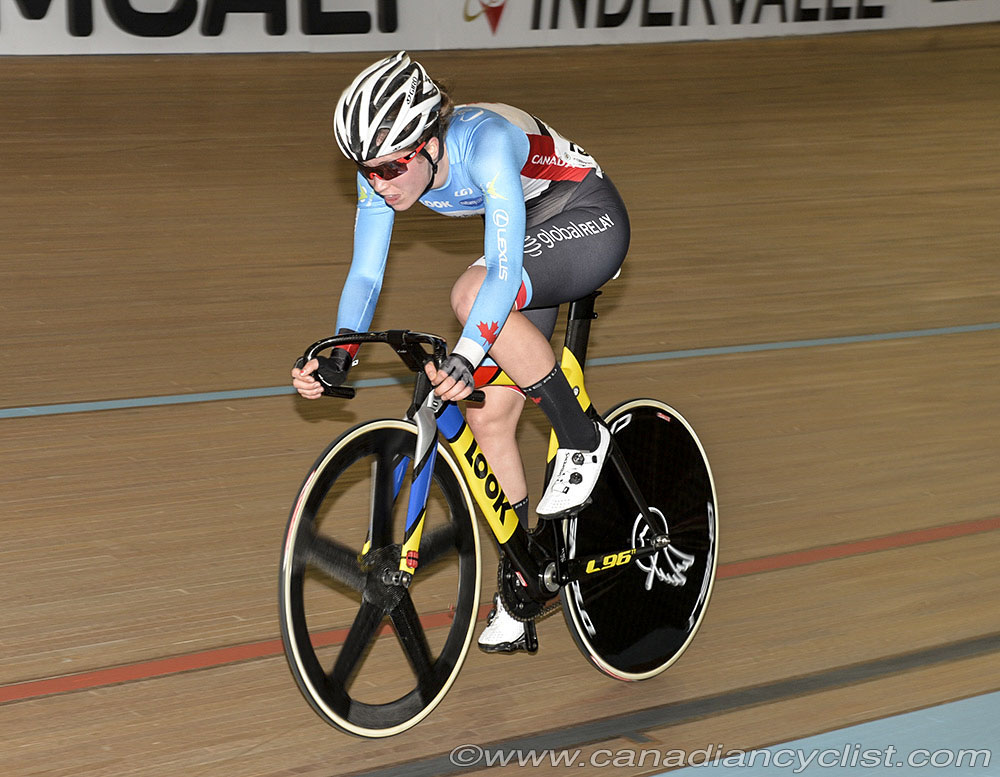 Over the course of three days, Canada recorded a bronze medal and nine additional top-10 performances.