Canada won its first medal of the 2017 Mountain Bike Championships on Thursday in Cairns, Australia, with Holden Jones of Squamish, BC, finishing third in the Junior Men's competition.  Roxane Vermette of St-Ferrol-les-Neiges, Quebec, was the top Canadian in the Junior women's race, finishing 16th.

The 4.3 kilometre circuit through the Smithfield Park rain forest features a long switchback climb and a technical descent.  Heat and dust are proving to be the primary difficulties riders face.  Each category did a start loop, with the women then racing four laps and the men five laps.

The men's race saw Australia's Cameron Wright ride away from the rest of the field on the start loop to give the host nation their first title.  Behind, the chase quickly came down to two riders - Holden Jones and Joel Roth of Switzerland, a member of the Team Relay world champion squad.  The pair had dropped the rest of the chasers by the end of the first lap and rode together until the final half lap, when Roth attacked to open a nine second gap on Jones and win the silver medal. 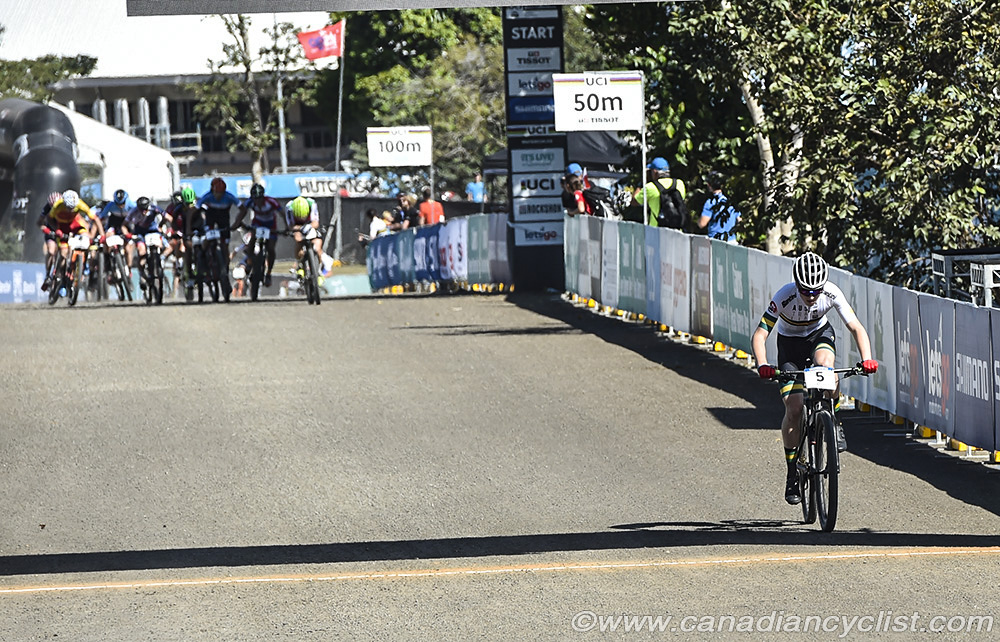 Wright opened a large gap on the start loop 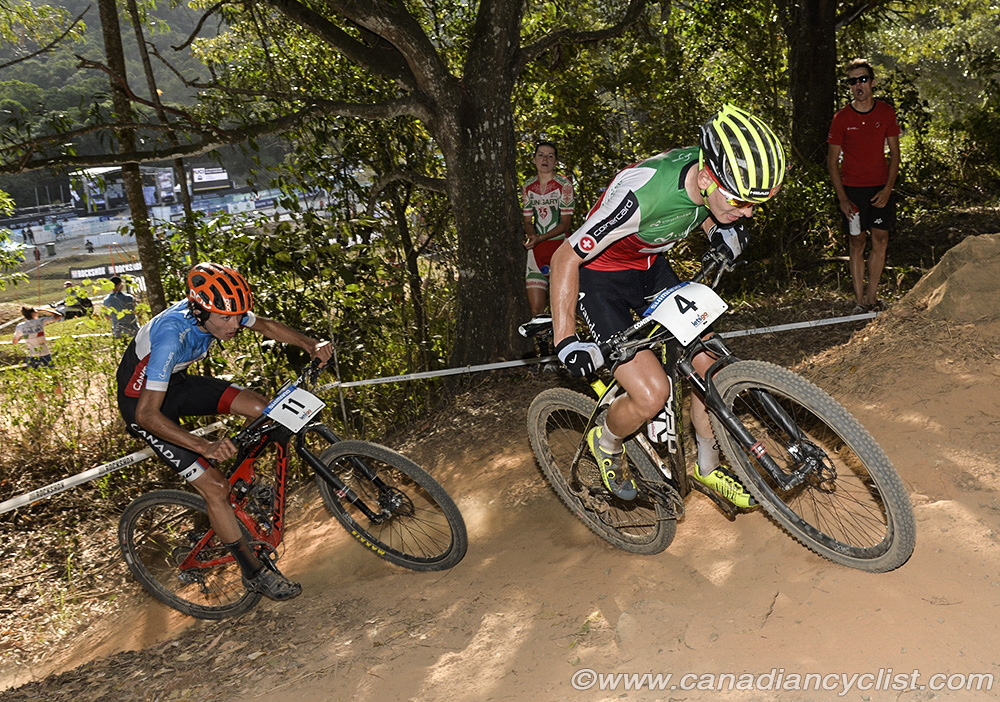 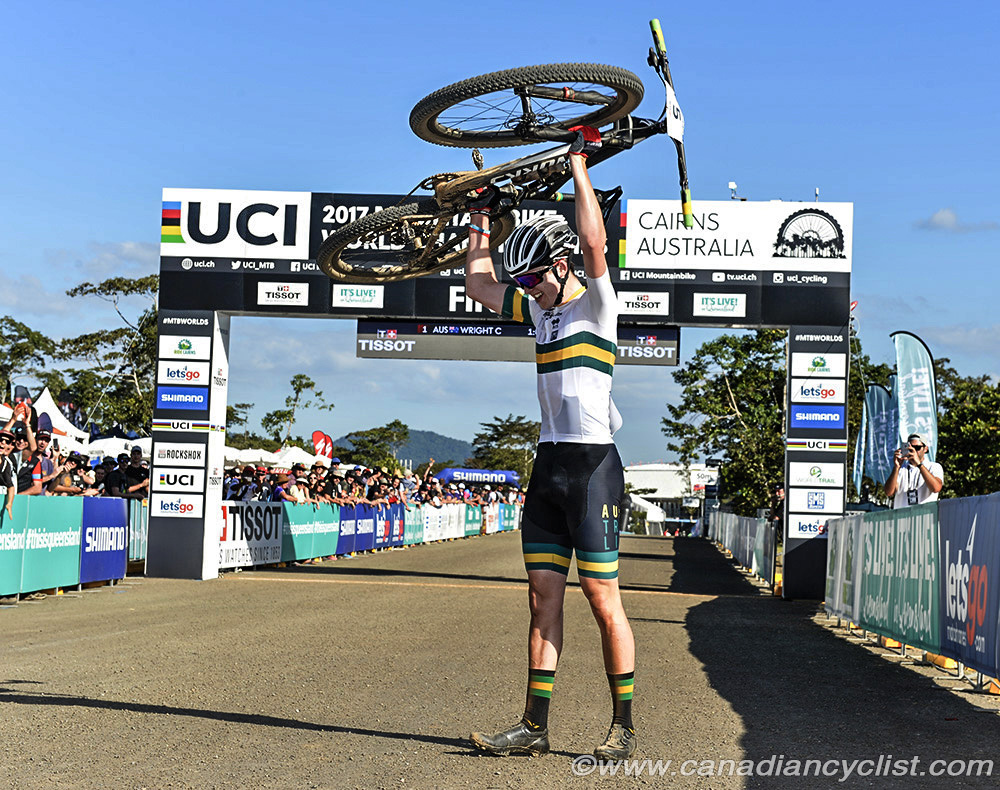 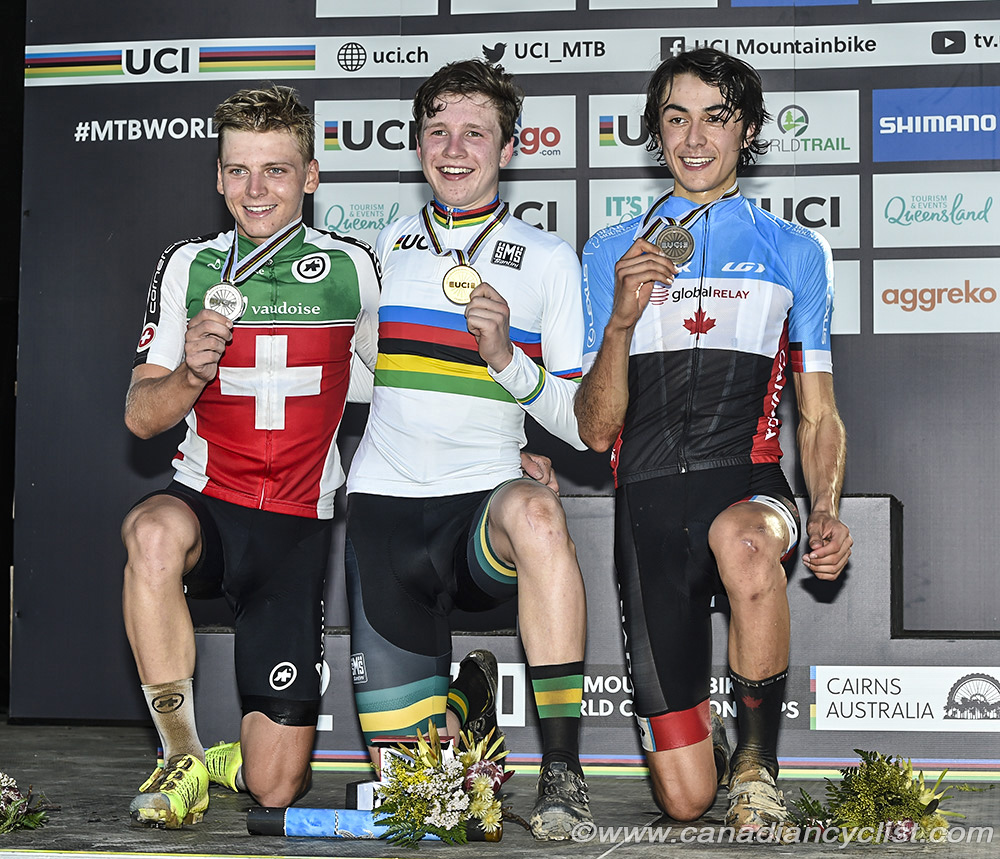 "I'm at a loss for words," admitted Wright, "doing it in front of my home crowd is the best thing that has ever happened to me.  It was a hard race, but it paid off in the end.  Initially, my plan was to stay in the front group for the start loop and attack before the singletrack, but I felt really, really good so I went straight away.  I saw the gap and thought 'keep it consistent and go from there'.  I think they [Roth and Jones] were catching me a bit on the climb and I was getting it back on the descent."

"I think after riding the Relay yesterday and looking at the lap times, that I was there with the faster Juniors," said Jones.  "That really gave me some confidence.  That removed from stress from under me and I just did what I knew I could do, and it all worked out.  I think that of any of the World Cup circuit courses, that this is the one that suits me the most.  It caught everyone off guard when [Wright] went so quick.  The rest of the race was us just trying to hunt him down, but he was on fire today.  It's pretty unbelievable, this is my best race of the year, maybe of my life.  I couldn't be more proud to show the world that Canada is on the map."

In the Junior women's category, Stigger has been the dominant rider all season in Europe, winning the European title and UCI Junior series races.  Her usual opponent is Loana Lecomte of France, and it was the same at the world championships, with the pair dropping the rest of the field by the end of the first lap.  Stigger and Lecomte rode together for the first half of the race until Stigger attacked on the third lap, opening a small 15 second gap that she held to the finish line.  Nadia Grod of Switzerland took the bronze medal, 1:41 back.

"I've had a great season so far," agreed Stigger.  "I liked this course very much and I just went full gas.  At the beginning Loana pushed very hard and I had to fight to be with her." 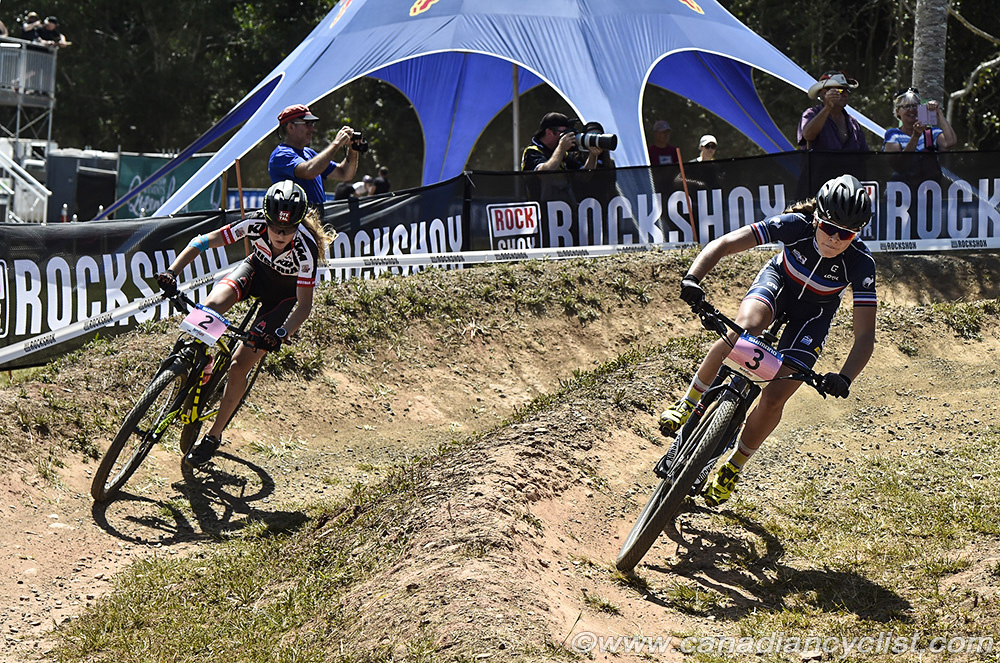 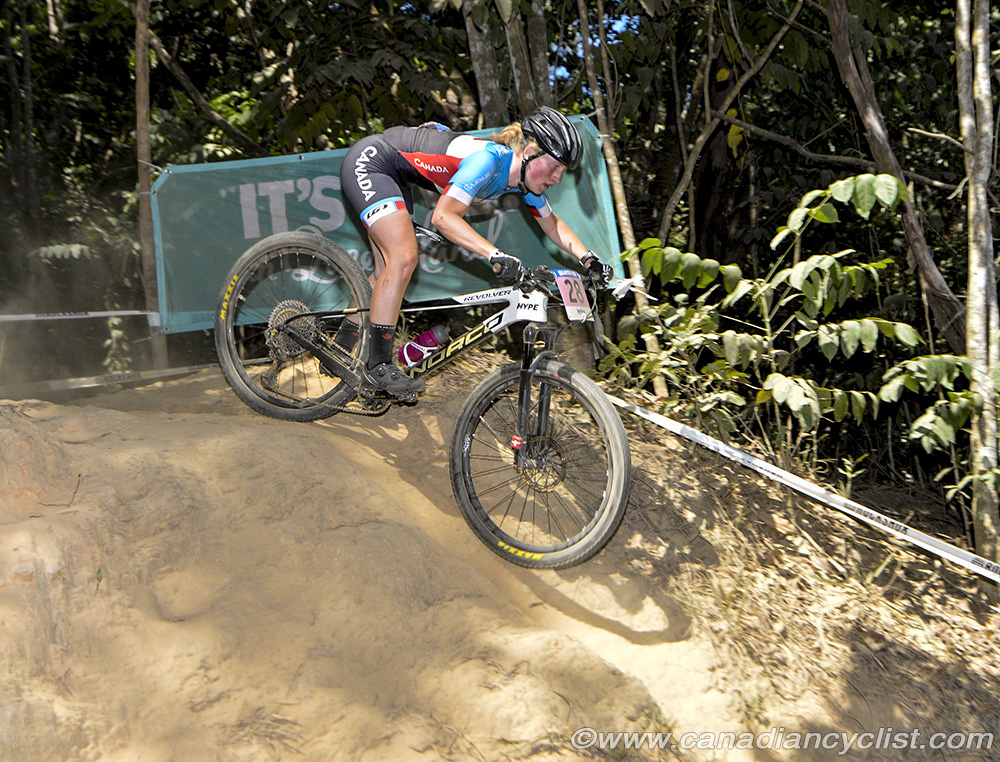 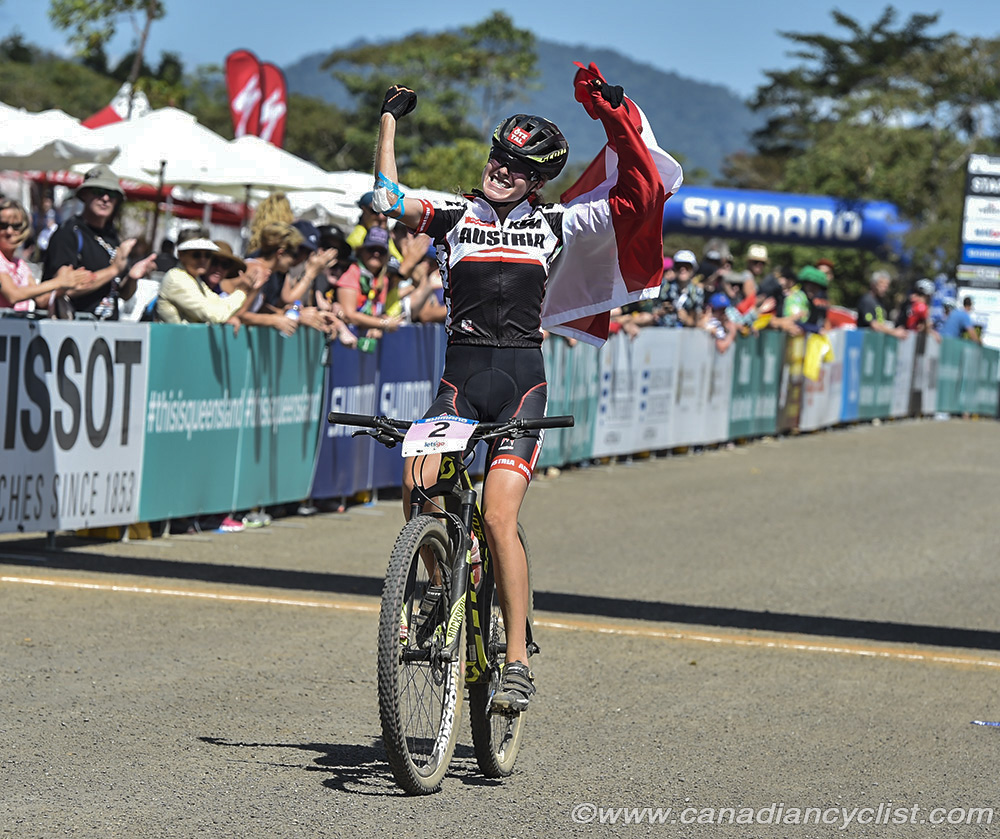 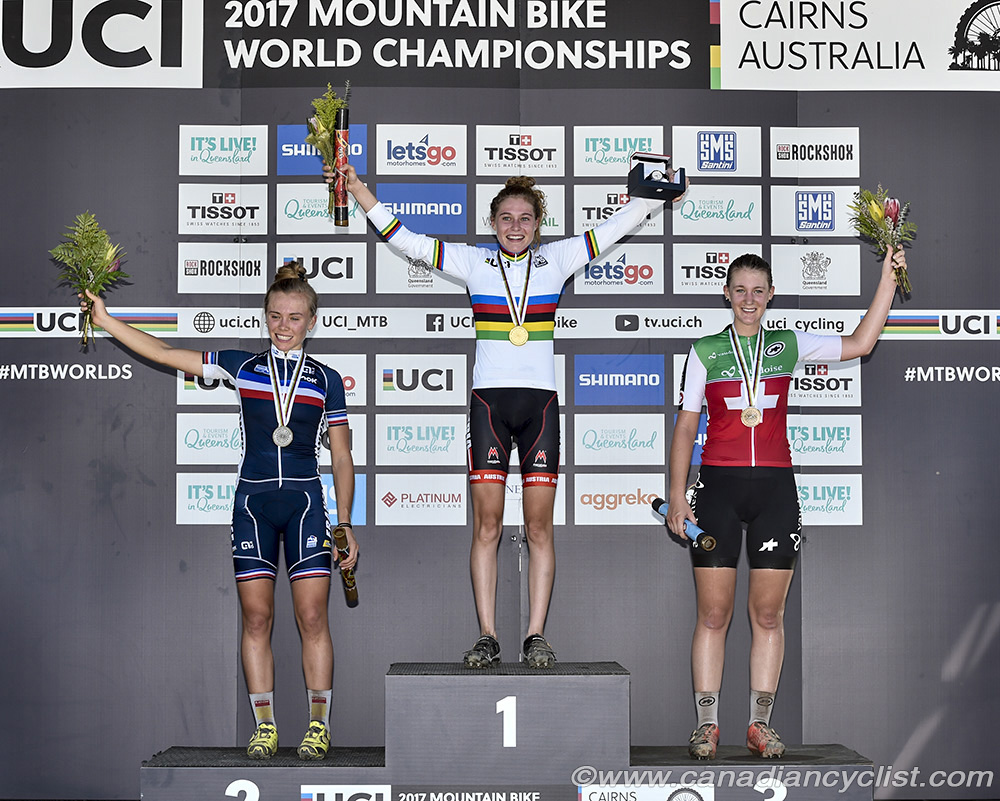 Canadian champion Vermette rode consistently in the mid-teens throughout the race, finishing five minutes and 32 seconds behind Laura Stigger.  In other Canadian results, Dana Gilligan of Oro Medonte, Ontario, was 20th and Leya Masson of St-Ferrol-les-Neiges, Quebec, was 23rd.  Sidney McGill of Edmonton, Alberta, was unable to start after injuring her wrist in training.

"It's my first year as a Junior and my first world championships, so I'm very proud of what I did today," said Vermette.  "I had no idea what I could do, so my plan was to just go hard on the hill and smooth on the technical section.  But I didn't have a lot of energy in the last lap, so I just did my best.  My season has been awesome, so when I came to Australia it has been a dream already, so I just tried to do my best."