This is the fifth year that the Pan American Championships have taken place in cyclo-cross, and the first in Canada, with nearly 300 riders competing across 13 categories for the Continental champion jerseys.  Masters racers faced sun, rain, sleet, hail and snow during their races on Saturday, while the Junior, Under-23 and Elite riders had sun, but biting cold wind on Sunday.

In the absence of four-time women's champion Katie Compton (Trek), the women's race was expected to be a battle between Rochette and American rider Ellen Noble (Trek Factory).  The pair rode away from the rest of the field on the first lap with Kaitlin Keough (Cannondale/Cyclocrossworld.com), with Keough being dropped midway through the race to eventually finish third.  Rochette and Noble rode together until just before the start of the final lap, when the American tried to squeeze by Rochette and crashed, giving Rochette enough of a gap that she was able to stay away and even extend her lead before the finish line. 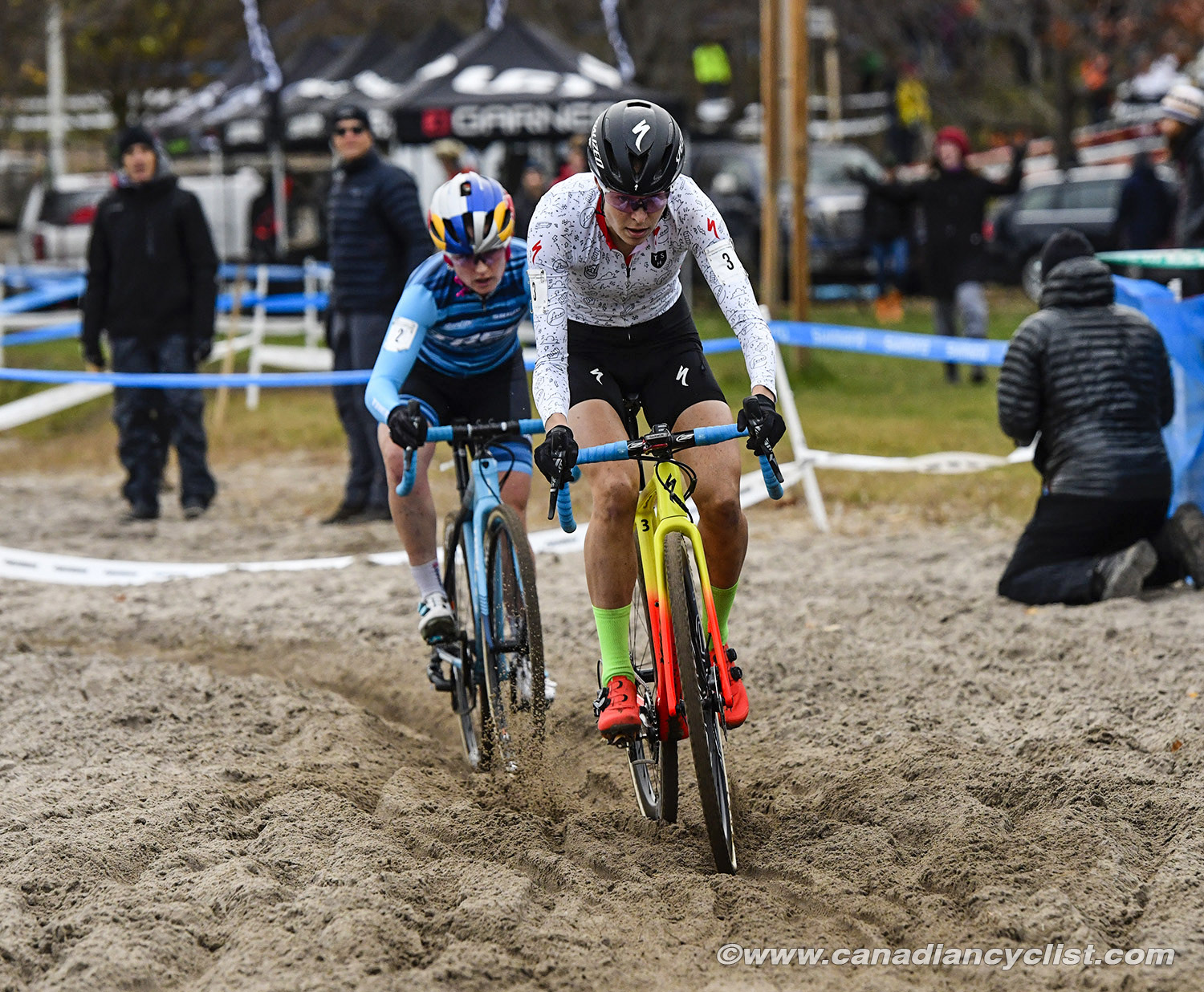 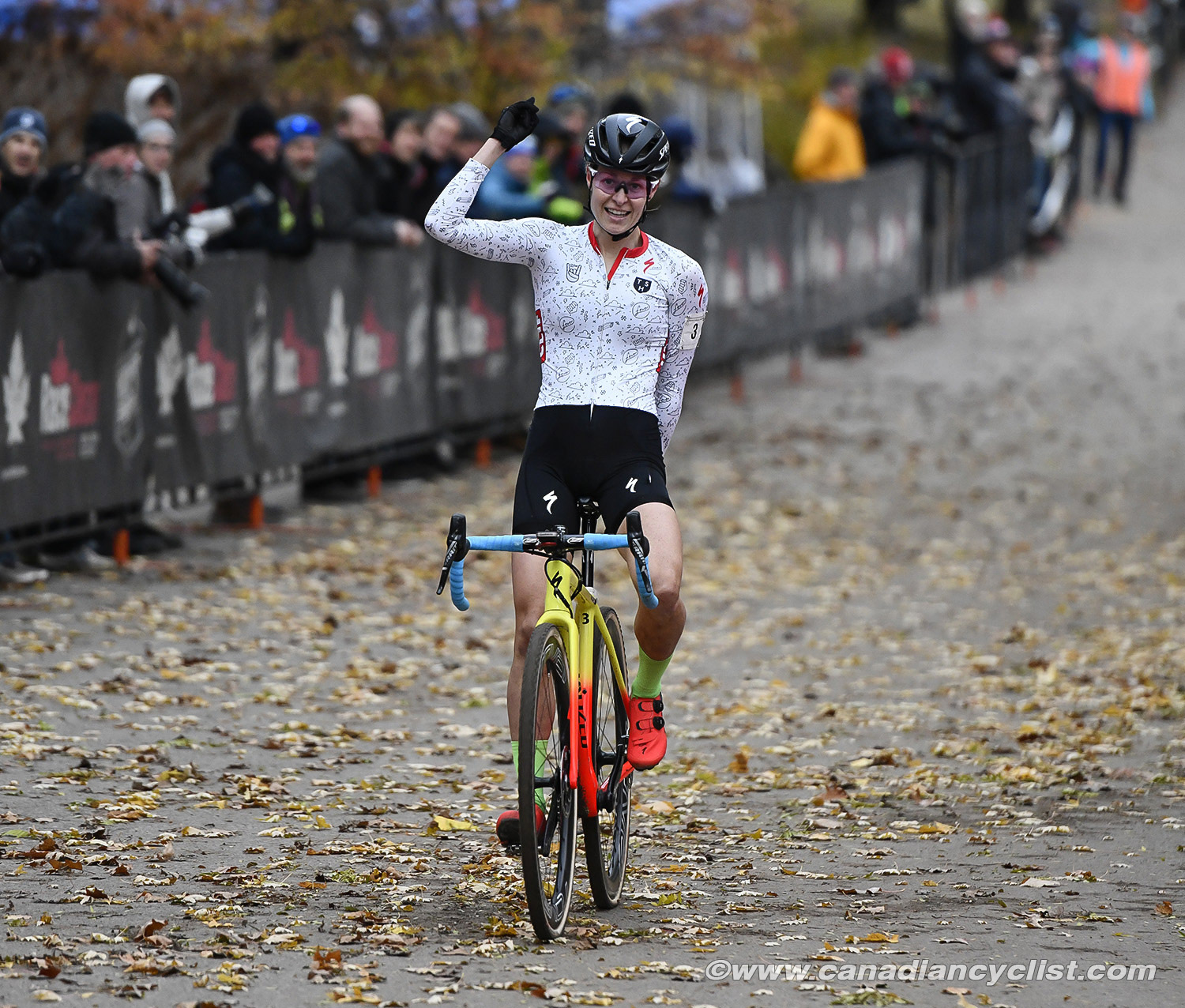 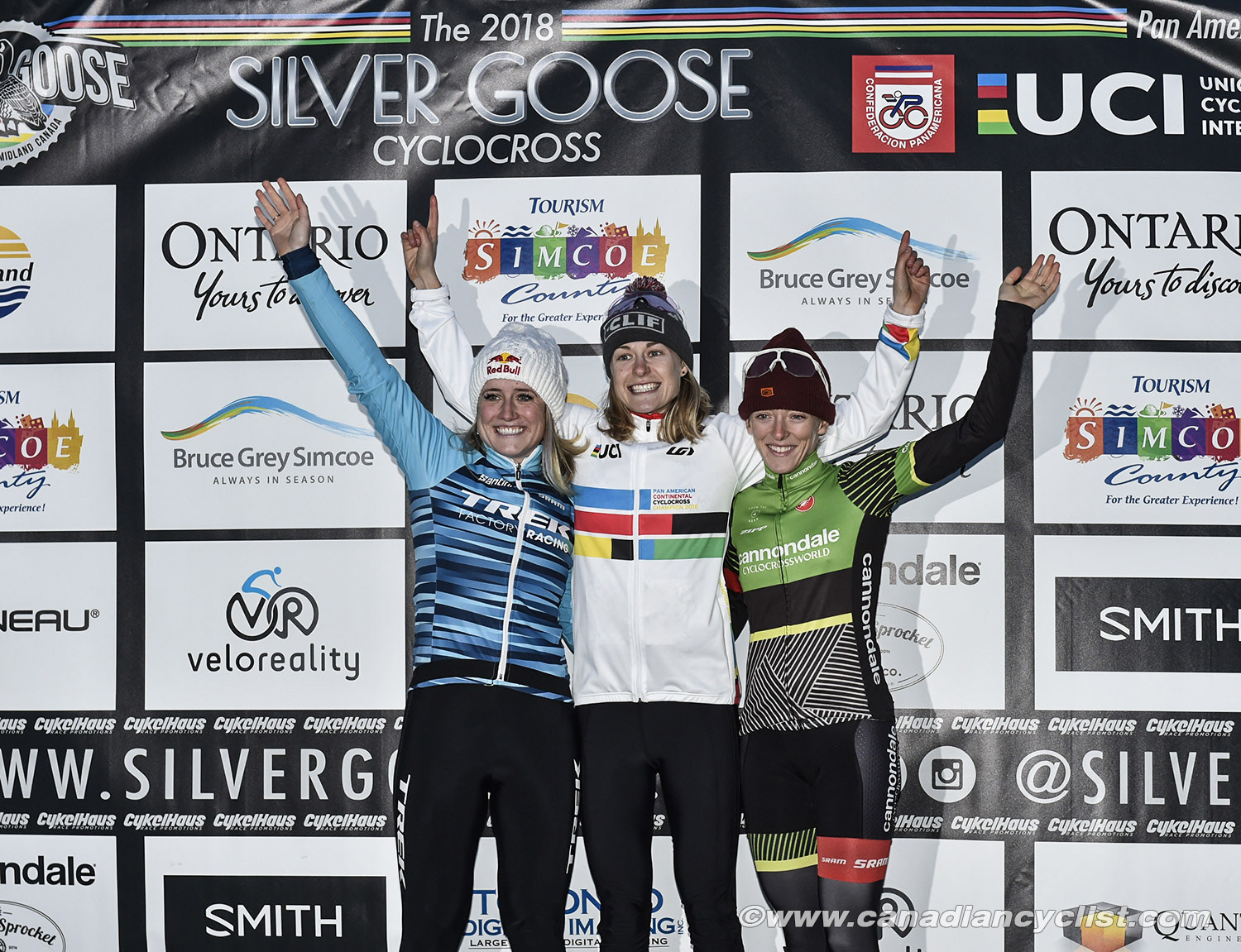 "Today I was all about being clear and clean and not making any mistakes," said Rochette, referring to her crash and flat ire on the previous day in the C2 race.  "I was definitely expecting a race with those two girls; that's how it's been all season.  Unfortunately, Katie Compton, the defending champion wasn't here; it would have been a different race with her."

"I got a gap with about two lap to go, and only Ellen got back to me.  She tried to go around me on the inside, and she hit both myself and a pole, and crashed.  That gave me a little bit of room, and I pushed it to open the gap a bit more.  It's very special to win this; I think it is my biggest win so far.  I think the best thing today was to have all Canadian fans; they were on fire!  To win the title in front of the home crowd is pretty cool."

Noble admitted that the attempted pass was ill advised:  "I rode into Maghalie and flipped over, going into one to go.  That was it; she got ten seconds and that was it.  I tried, but ten seconds on this course is a lot.  I felt like I could have won it, and I got impatient."

The 60 minute men's race was one of attrition.  van den Ham was aggressive from the start, leading a group of contenders that gradually dwindled to four - van den Ham, Curtis White (Cannondale/Cyclocrossworld.com), Kerry Werner (Kona Maxxis Shimano) and defending champion Stephen Hyde (Cannondale/Cyclocrossworld.com).  Hyde surged with two and a half laps to go, only to crash on the stairs, taking van den Ham down with him and enabling White to open a six second gap.  Hyde dropped out shortly after, while van den Ham was able to bridge across to Hyde before the start of the last lap, setting the stage for a two-up sprint finish.  Van den ham led out the long sprint, leaving little room along the barriers for White, but it was enough, and the American won by half a bike, as van den Ham pounded his bars in frustration. 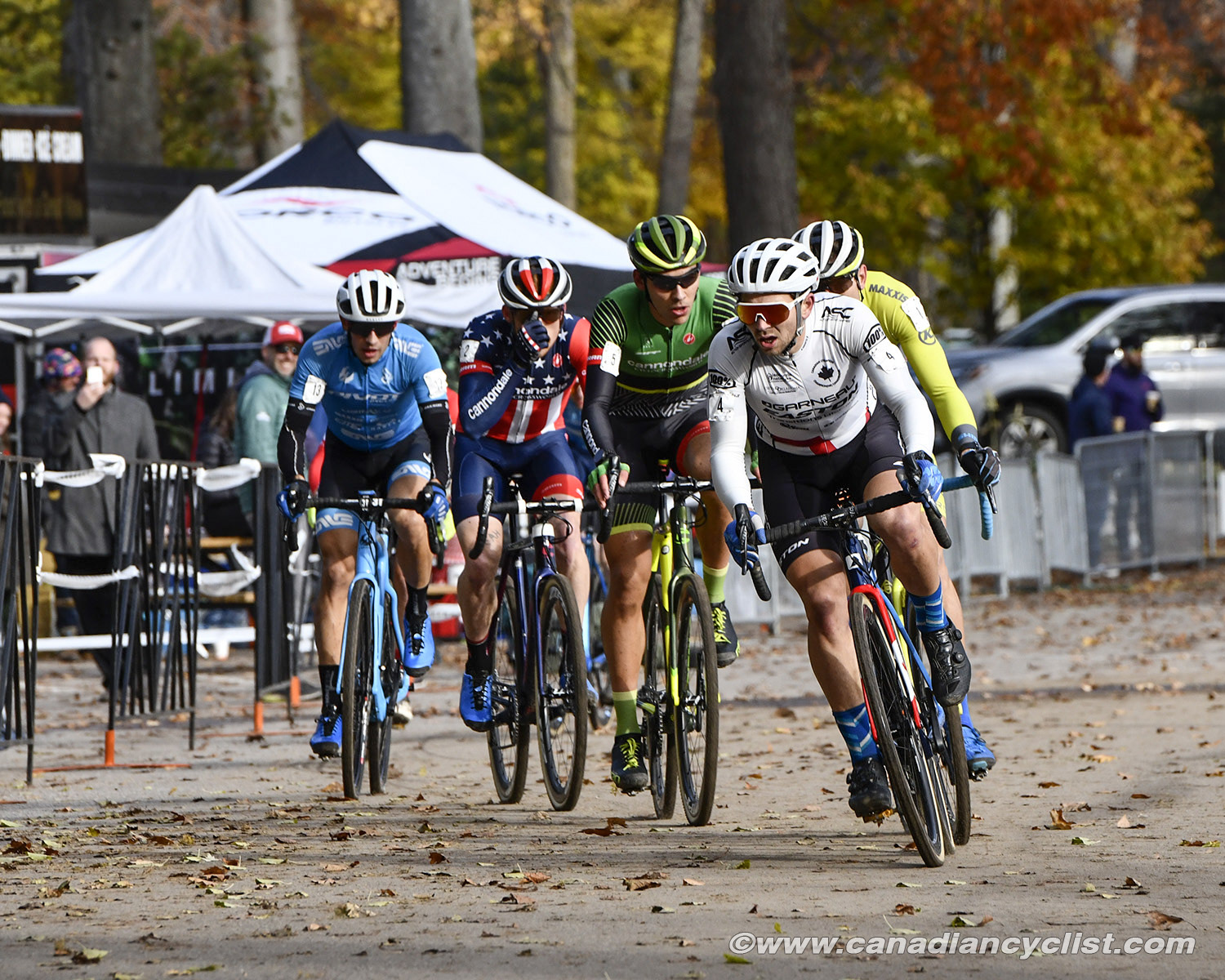 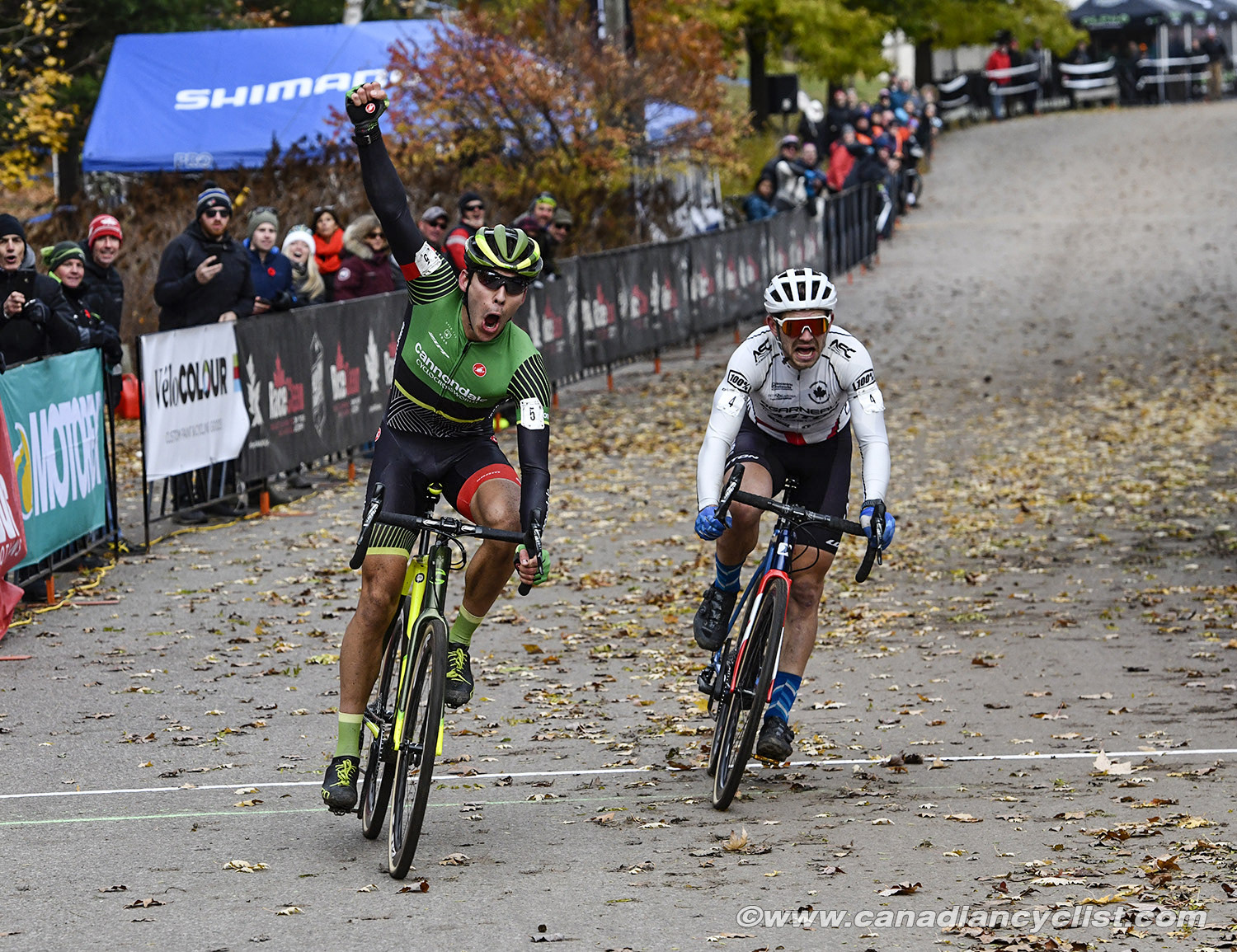 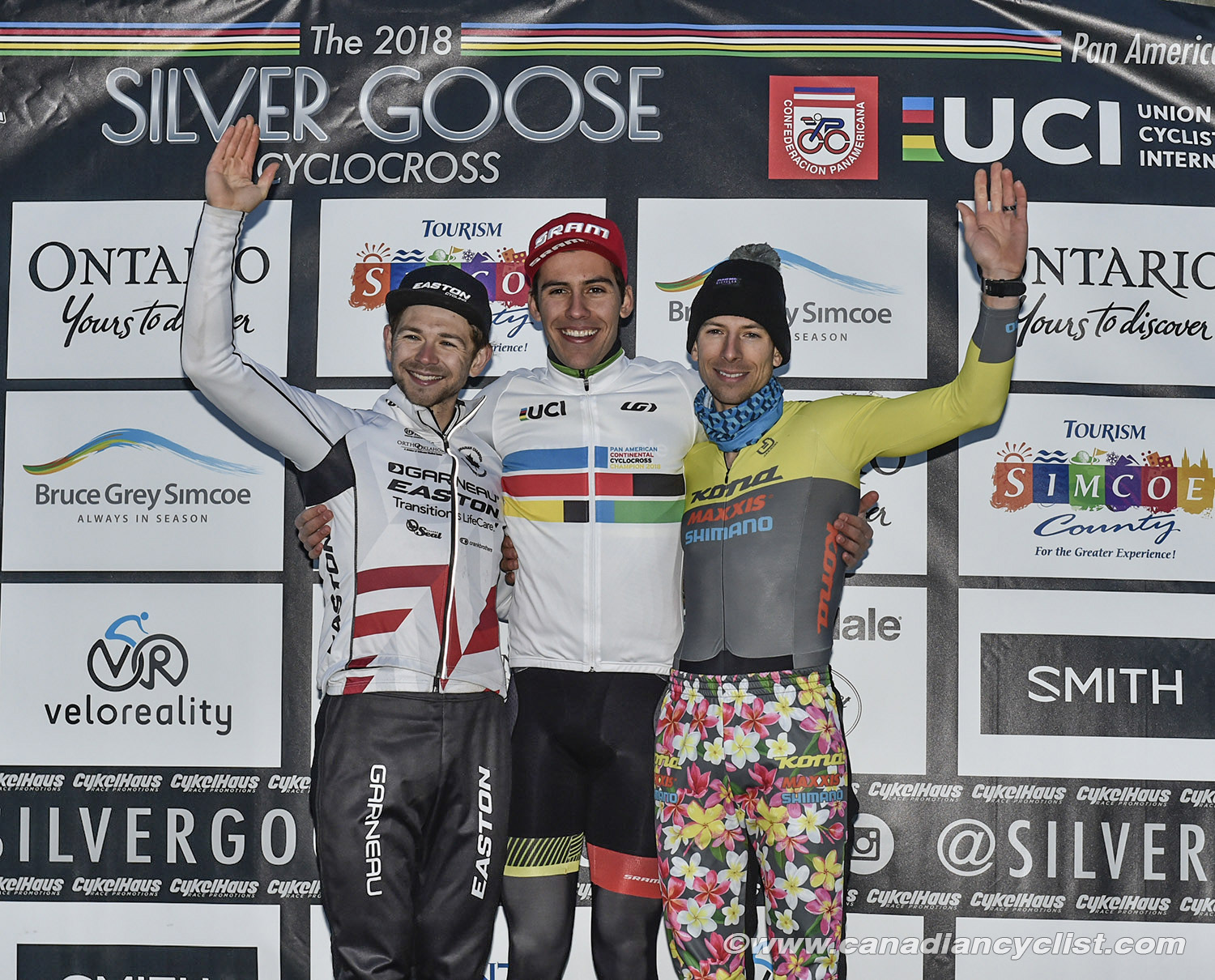 "I went out there and gave it what I had; it's one of the closest races I've ever been in," said a visibly disappointed van den Ham.  "Curtis was riding really strong and we came down to the finish stretch; it's one of those finish stretches where you might be able to win from the front, so I decided to lead it out.  It just came down to an all-out sprint and he's a quick guy, just had that little extra jump on me today.  It's a little disappointing now, but it was amazing to race in front of the home crowd."

White agreed, "Mike and I were duelling it out on the last lap.  At about three to go, my team mate Stephen Hyde put in a good dig and stretched the group out, but unfortunately, he went down on the stairs.  I was in third wheel and could capitalize on that.  I got a good gap and Mike van den Ham was the only guy that could come with me.  On the last lap he was kind of dictating the pace, but I was pretty confident in my sprint.  it was a close one, but I was able to edge him out in the end."

In other categories, defending Canadian champion Ruby West and american Clara Honsinger (Team S&M CX) rode away from the rest of the field, with Honsinger pulling away in the last two laps to take the Under-23 women's title.  Carter Woods came within two seconds of taking the Junior men's title.

Masters titles won by Canadians went to Patricia Konantz (Ride with Rendall) in Women 65+, Lisa Holmgren (Hardwood Next Wave Cycling Team) in Women's 45-54 and Sarah Gilchrist (Edmonton Road & Track) in Women's 35-44.  Robert Orange (Ride with Rendall p/b Biemme) was 30 seconds ahead in the Men's 55-64 category with only half a lap to go when he crashed heavily and had to pull out of the race.

Eight Titles Awarded to Masters at Pan Am Cyclo-cross Championships