Peter Disera (Norco Factory Racing) won his first Paris to Ancaster on Sunday, in possibly the fastest race in the history of the event, clocking a 34.9 kilometre average for the 71.6 kilometres.  Jenn Jackson (AWI Racing) took the women's title, finishing an impressive 21st overall. 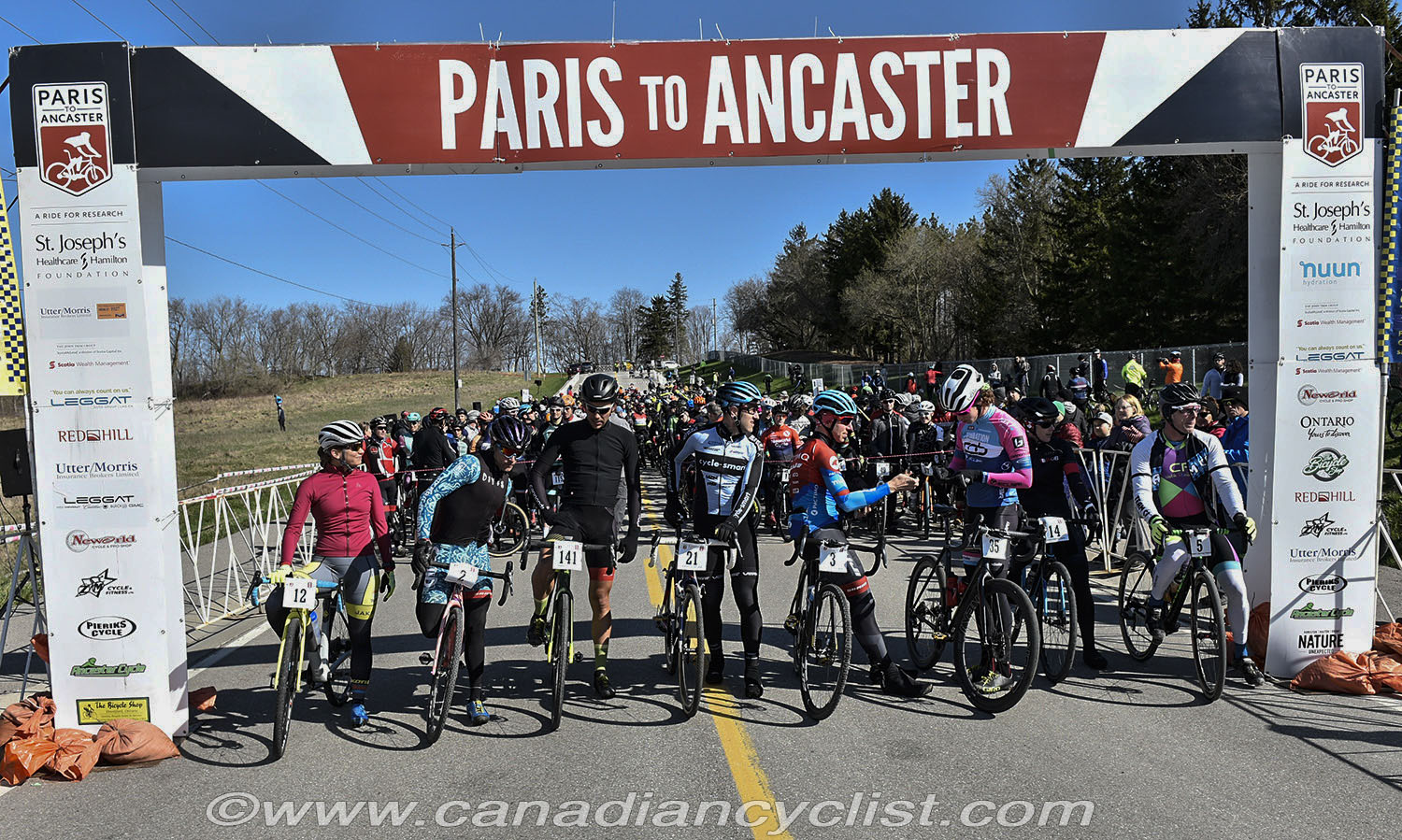 Despite the forcast of rain, the sun came out to bless the 26th edition of P2A

Despite consistent forecasts for rain and temperatures in the single digits, race day was sunny and the track was mostly dry - with the exception of a few mud holes and the infamous mud chute in the final few kilometres.

Elliott and Maher attacked, opening a 20 second gap quickly as the chase splintered.  While the group behind reformed, that could not catch the leaders.  Going into the final kilometres, Elliott dropped Maher, while Disera was able to move into second by the final kilometre-plus climb.  In one of the closest finishes ever, Disera overtook Elliott in the final 200 metres, with Disara winning by six seconds. 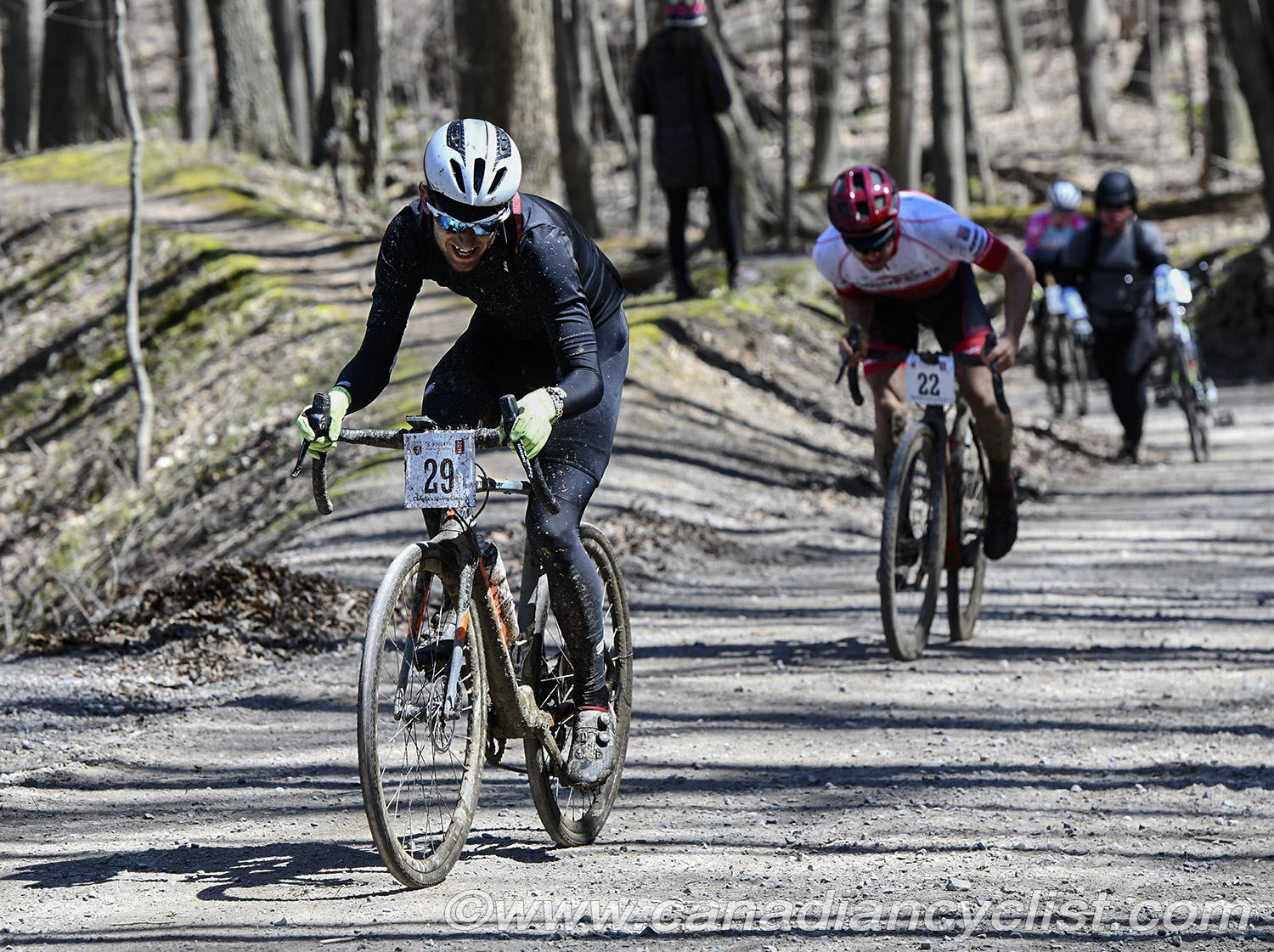 "It was an interesting day," commented Disera.  "There were a lot of moves and some splits in the mud sections.  Will Elliott and the CCB rider [Maher] were tearing it up at the front all day; they were sitting at the front, 20-25 seconds ahead, and the four of us could not close.  It was very impressive.  Where I got away was in the mud chutes; I hit the first mud chute in front of the chase group and I came out 100-150 metres in front of everyone and closed up to the leaders a bit.  We hit the final climb about 50 metres apart and it was a painful last two minutes." 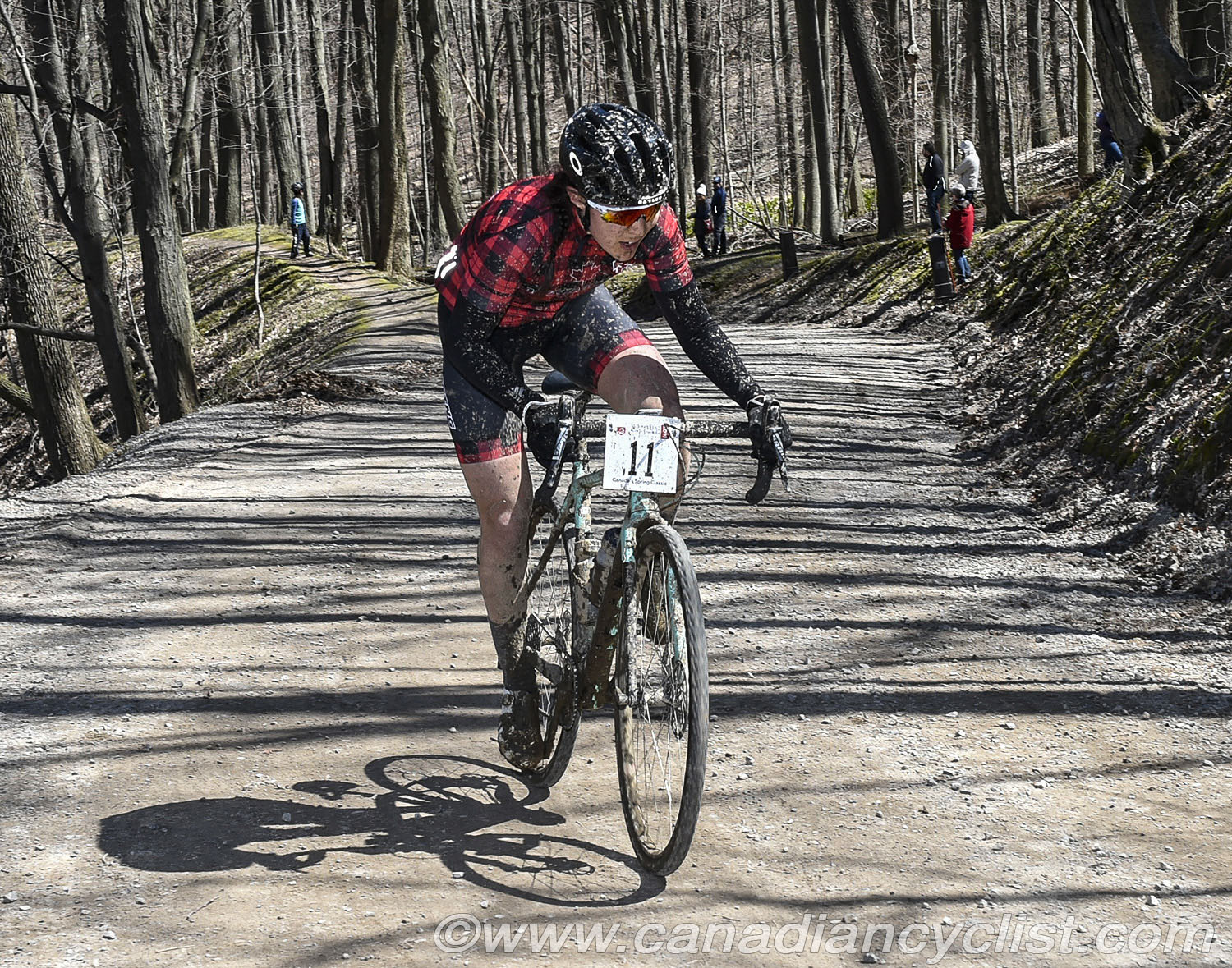 In the women's race, Jackson rode at the front for the entire race and was not challenged, despite dropping her chain - without that mishap she would have likely finished in the top-20 overall.  Jackson finished nearly nine minutes ahead of Rebecca Fahringer (Kona Maxxis Shimano), with former champion Sue Palmer-Komar (Wheels of Bloor) taking third - and winning the 50-59 age category (good enough for fourth overall among the men).

"I fought hard to position myself to make the lead group," explained Jackson, "I wanted to try and get away from the other women and also to finish as close to the front as possible.  It was really tough, the guys accelerate so hard and there were some big crosswinds so we were constantly riding the gutter. I'd try to get up towards the front into the offroad and muddy sections to limit my losses in less raw power or getting stuck behind less-technical riders to make sure when we got back into the wind I'd still be in the pack, not out the back."

"It was a bit of a heartbreaker dropping my chain at 62 kilometres on a random rail trail bump. Lost the main group and shelled myself trying to catch up solo over the next three kilometres of road leading up to the mud chutes. The race had detonated by that point, so I was able to pick off a few guys but didn't quite make the top 20. I'm still really happy with it though, just a bit sad knowing I could've battled a little farther up without the chain drop."

"I'm so excited about my ride though. Knew I was risking blowing up by pouring so much into staying with the lead group, but today it worked out. I was in a good place mentally and motivated to compete for every position out there. Taking a second win is amazing; P2A has become a special race for me. I really hope I can keep carrying the good legs and mindset to the World Cup in May."