Held on the same roads as the Tour de Beauce time trial a week prior, riders faced a rolling course and rough pavement.  The women rode 28 kilometres and the men 34 kilometres. 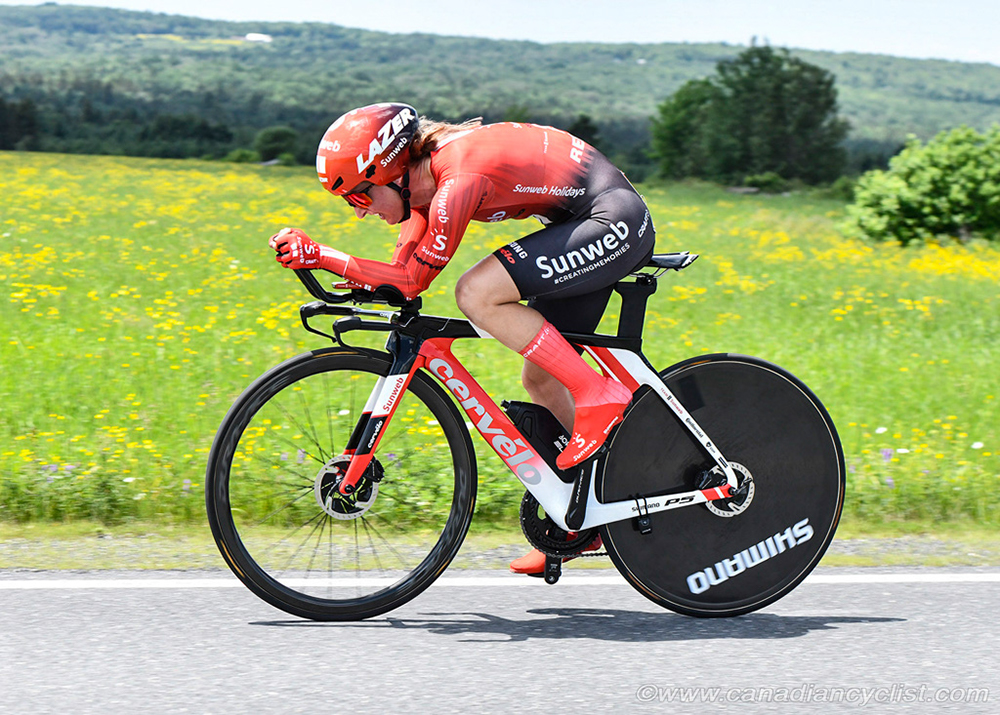 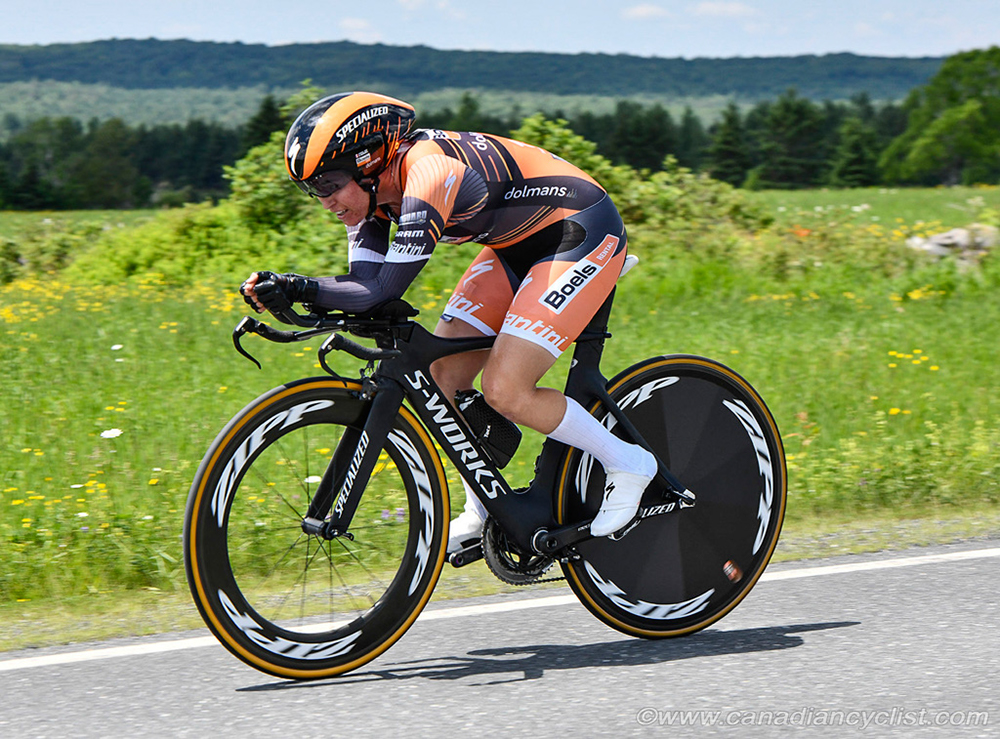 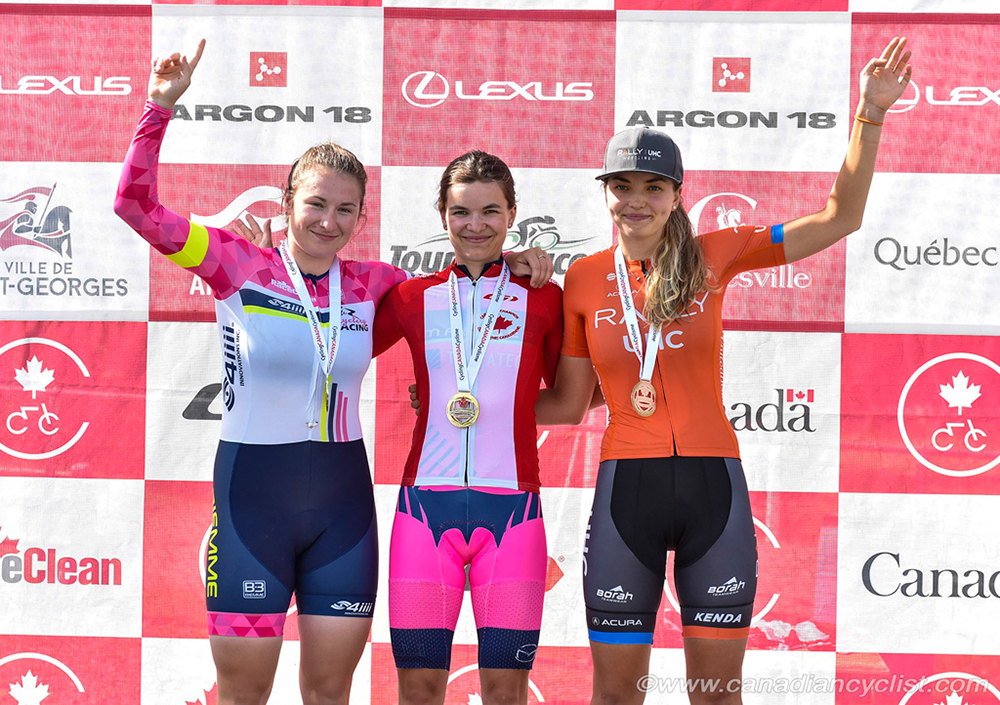 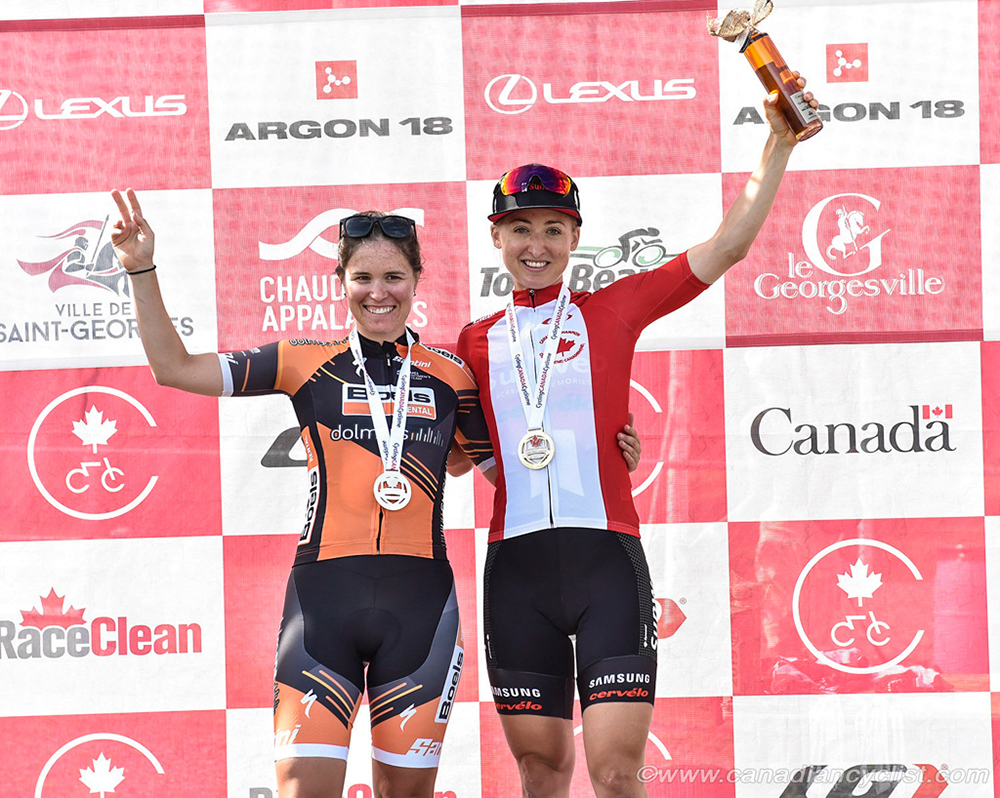 "I'm really happy to win another title," said Kirchmann, " but I had to work really hard for it today.  This course was really demanding, always either up or down, and there was some wind.  It was a painful ride.  I went out quite hard in the first five K, and then I realized that maybe I needed to be a little smarter with my pacing.  I saw Karol-Ann ahead of me on the final climbs, so then I really gave everything.  It was enough to take the victory."

The men's race pitted 11-time champion Svein Tuft against his team mate, with Britton starting one minute in front of Tuft, the final rider.  Britton was coming off a very strong finish to the Tour de Suisse.  The two were within seconds of each other in the final six kilometres, and it wasn't until the last couple of climbs that Britton was able to open a gap, finishing with a time of 42:54, 14 seconds ahead of Tuft.  Adam Roberge (Elevate KHS) was third fastest, taking the bronze medal in the Elite category and the Under-23 national title.  BC's Jacob Rubuliak (TaG Cycling Race Team) won the Junior Men's race. 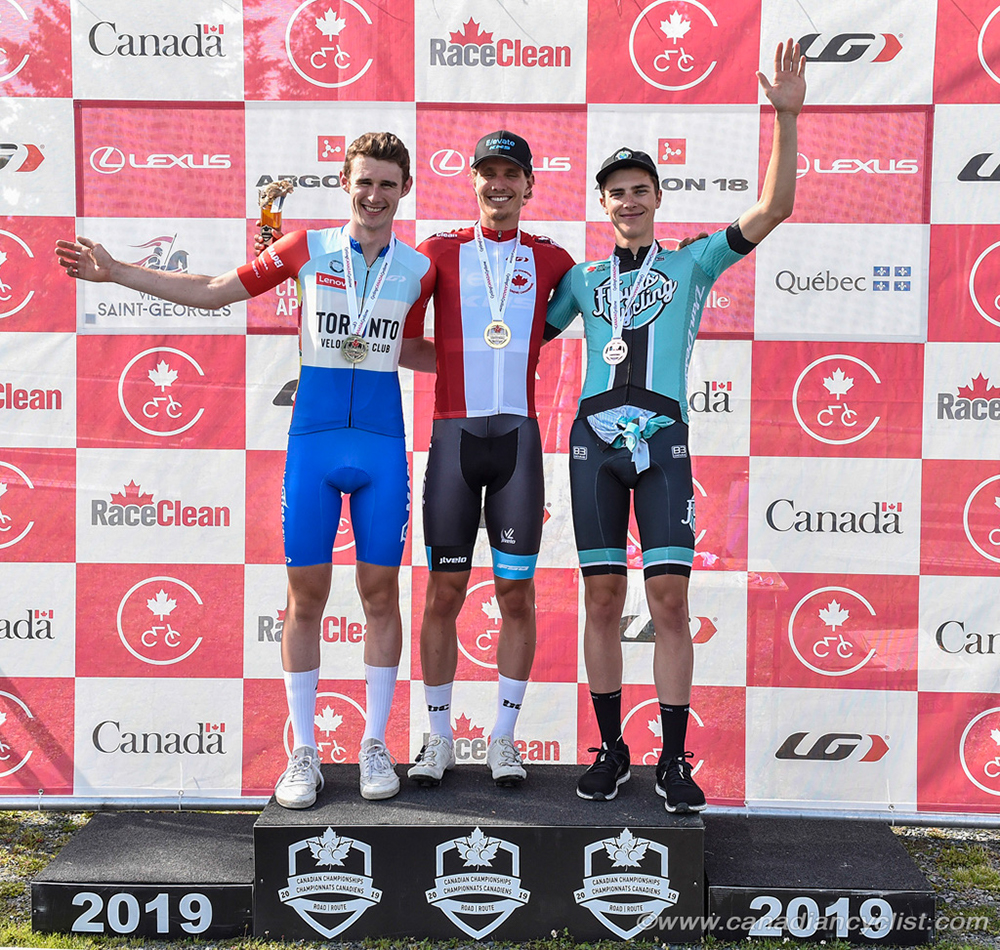 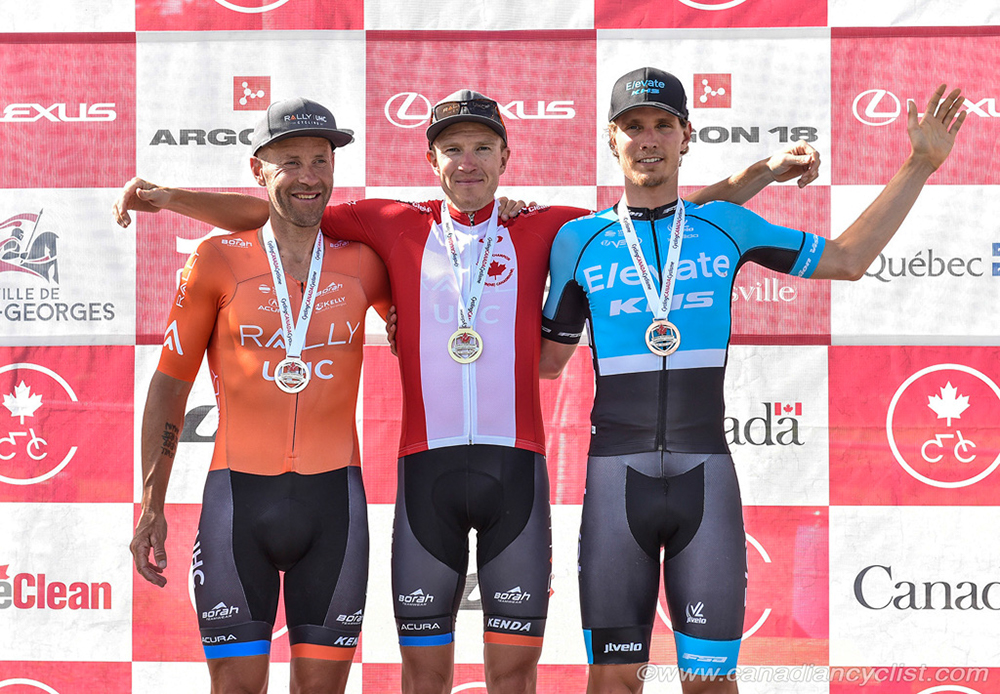 "I almost didn't bring my time trial bike," admitted Britton.  "The [Tour de] Suisse was really hard on me, so to come here and have this ride, and to beat Svein, who is a legend; I couldn't have asked for a better outcome.  The initial eight kilometres out and back was a mirror of the time trial course used in Beauce, so I knew it.  But the middle section is just brutal; traditional Beauce roads with cracks, patches and frost heaves in the road everywhere.  You spend half your time jumping your bike over them.  So my plan was just to go all out in the first and last eight K.  In the last five kilometres I just emptied the tank.  It's a huge honour, and I'm pretty over the moon right now." 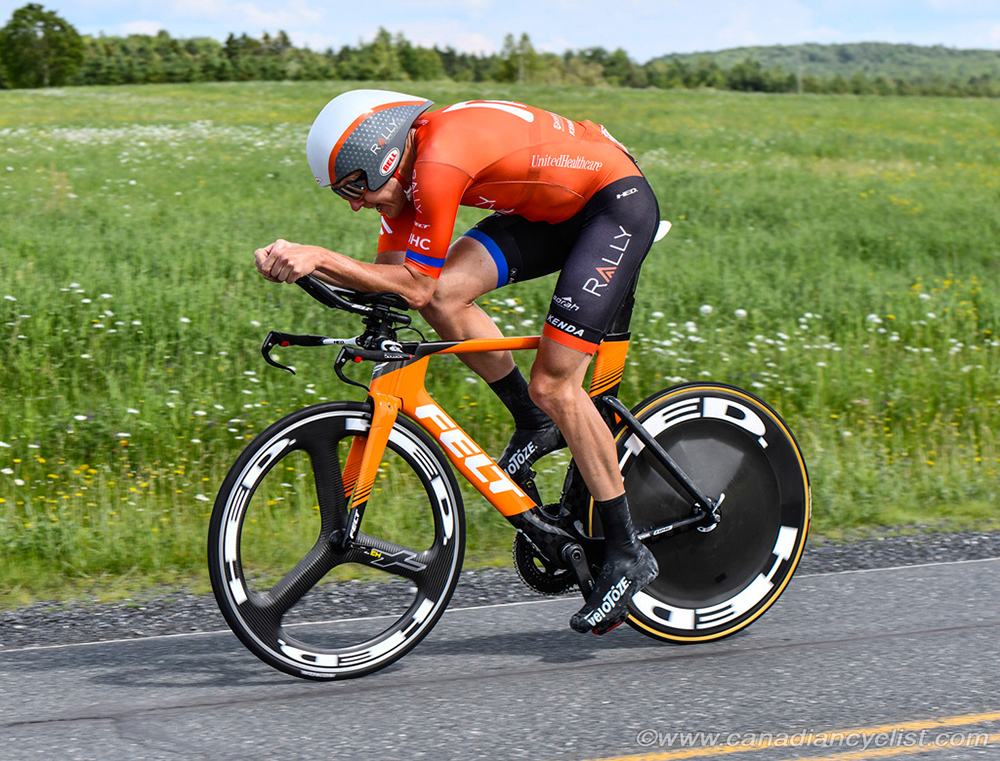 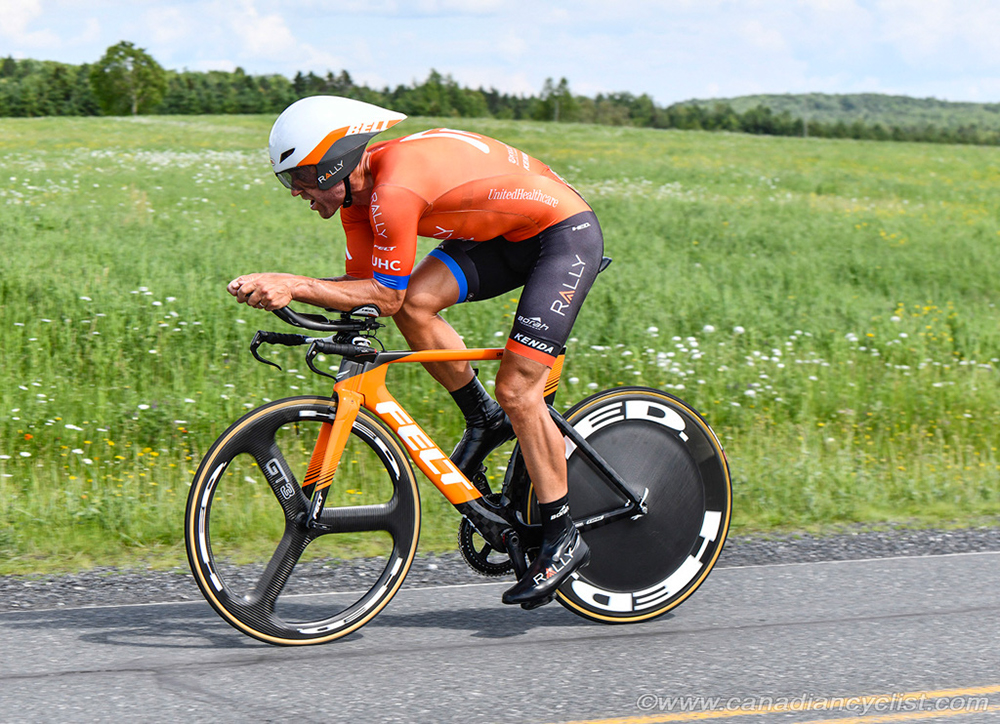 "It couldn't have gone to a better guy," said Tuft.  "Rob's been on the mark and so close the last few years, and also how he's been riding and what he showed at Tour de Suisse last week.  It shows how strong he is and where he's at in his career.  The best thing is that someone will wear the jersey in races next year.  It's important to have one of our best time trialists in Canada representing that jersey in Europe.  Hat's off to Rob."