Anna Terpstra (Ghost Factory) took a historic first-ever women's cross-country World Cup victory for a Dutch rider on Sunday, in Vallnord, Andorra.  Despite struggling with the 2000 metre altitude, world champion Kate Courtney (Scott-SRAM) managed to retain her lead in the overall standings.  Haley Smith (Norco Factory) was the top Canadian in 16th, coming back from a crash, one spot ahead of Catharine Pendrel (Clif Pro).

Hot, dry and dusty conditions added to the difficulty of this extremely demanding circuit, with rough descents causing numerous crashes, and steep climbs made worse by the thin air.  Altitude was a huge factor, with most of the early leaders fading in the second half of the six lap race. 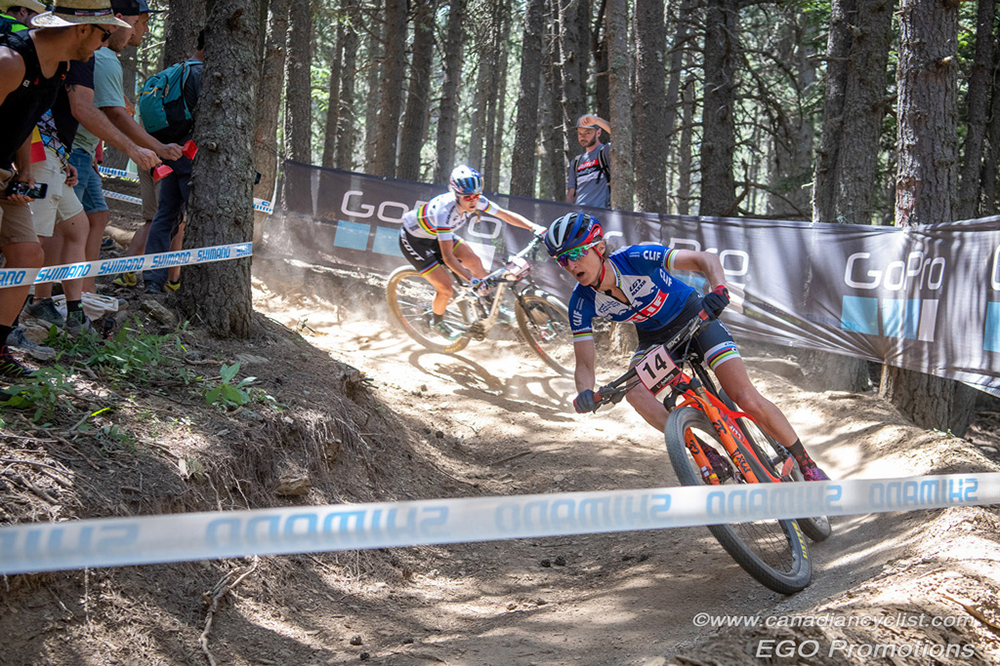 Pendrel moved into the lead on the steep 'Wall' climb, joined by Frei and Ferrand Prevot on Lap 2, and then gradually by Terpstra and other riders, including Neff, who was riding herself back into contention.

As the early leaders faded off the podium, Terpstra moved into the lead, caught by Neff on the fifth lap.  Behind, Yana Belomoina (CST Sandd Bafang) was riding her way into third and Olympic champion Jenny Rissveds (Sweden), in only her second World Cup since the Olympics, up to fifth.  Also riding well at altitude was Mexico's Daniela Campuzano, eventually finishing fourth for her first World Cup podium. 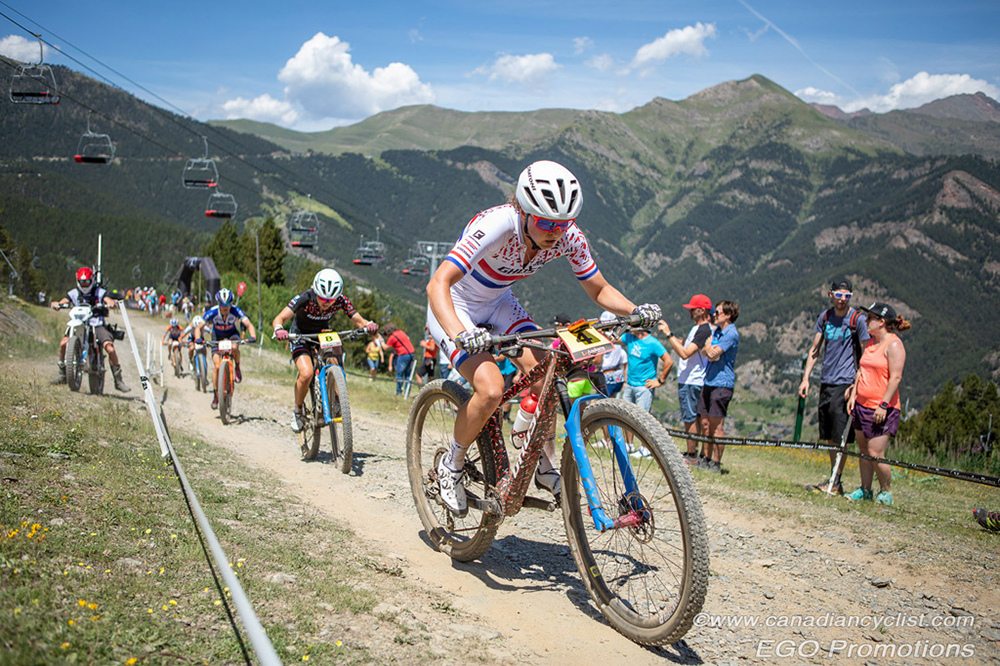 Terpstra in the lead 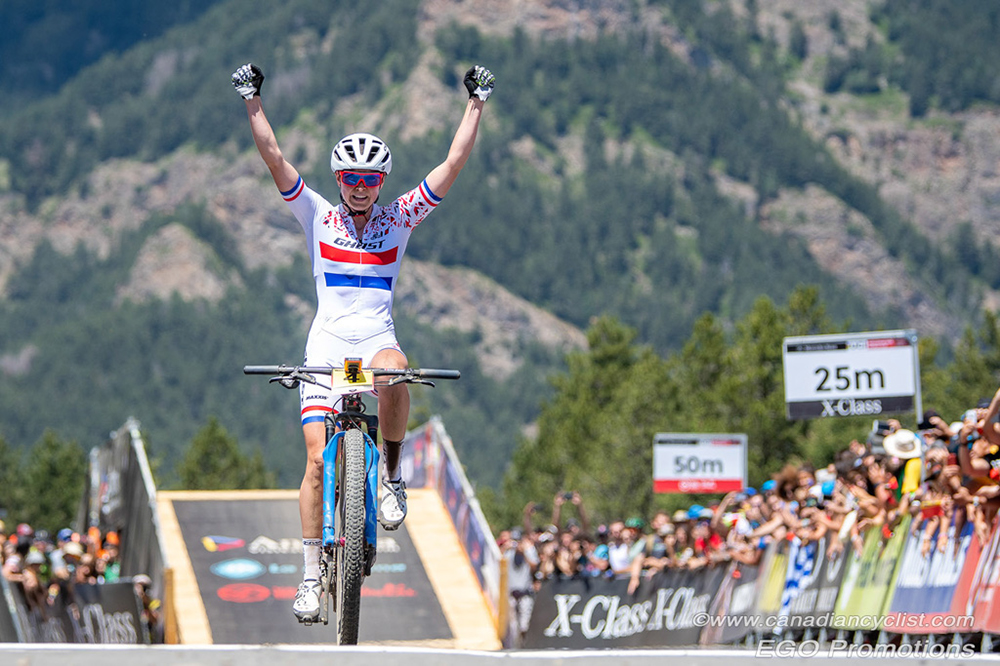 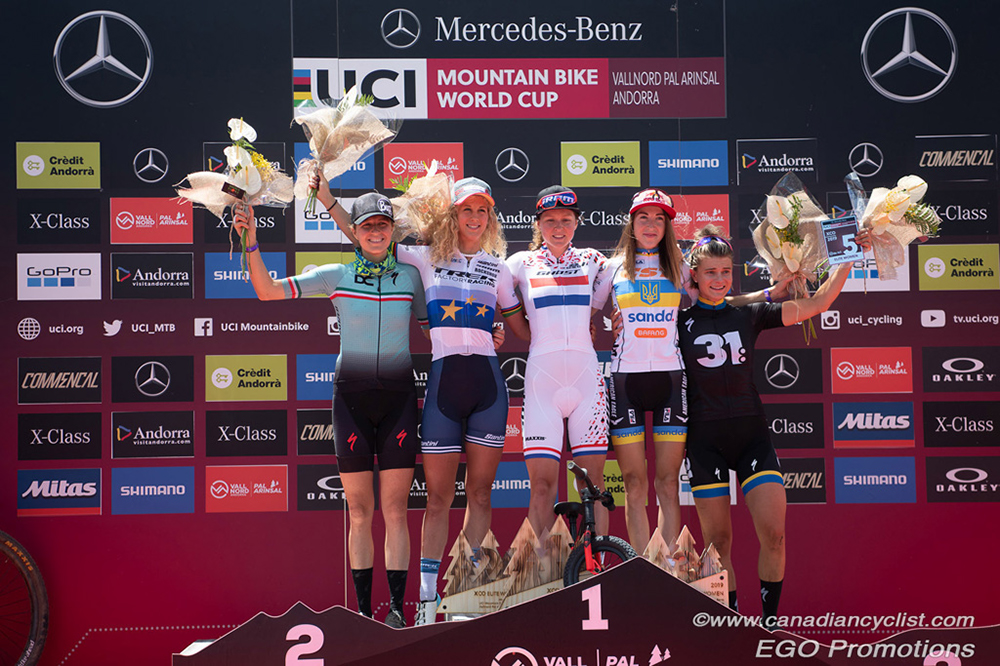 At the front, Neff tried an attack on the first climb of the final lap, but Terpstra immediately countered and rode away to win by 38 seconds.  Belomoina took third, followed by Campuzano and Rissveds to complete the podium.

Courtney's lead drops to 75 points over Neff, with Terpstra jumping to third overall from seventh, Tauber up one spot to fourth, and Belomoina from ninth to fifth.

Terpstra was unaware that her first World Cup win was, in fact, the first for Dutch woman at the Elite level, "I didn't think of it when I was racing, but I felt good all week and I knew that I had prepared good for the altitude, which is normally a weakness for me.  I didn't expect this, but I wanted to take a risk, so I'm very, very happy.  My team had said 'don't go too early', but I thought that if I let Jolanda go down the downhill first I would have to catch up, so I tried to be first into the downhill and then I saw I had a little gap, so I gave everything I had, but without overdoing it."

Rissveds, who retired after the Rio Games, with what she recently described as mental health issues from the pressure, made a stunning comeback from starting well down in the field.  "I can't believe it.  My self confidence had disappeared, it was gone since the Olympics.  I could not believe that I could come back and be up there.  After Nove Mesto [the previous World Cup, which was her first race back, where she finished 33rd] I looked around and saw the riders I was with and thought, 'I shouldn't be up here, I'm not one of them anymore'.  When you start to think like that, your body shuts down and you can't get out your full potential.  After Nove Mesto I started to work on my mind game and it's incredible what your head can do; if you believe in yourself you can go so far.  I don't want to focus on results anymore, because that is one of the things that took me down, but I can't stop dreaming about to come back to where I stopped, and I will keep on working, until I can say I'm back at the same level."

In the overall standings, Smith continues to be the top Canadian, in ninth, a drop of one spot after her third place finish at the previous round.  Pendrel moves up a spot to 14th, Batty from 29th to 24th, and Walter to 29th from 30th. 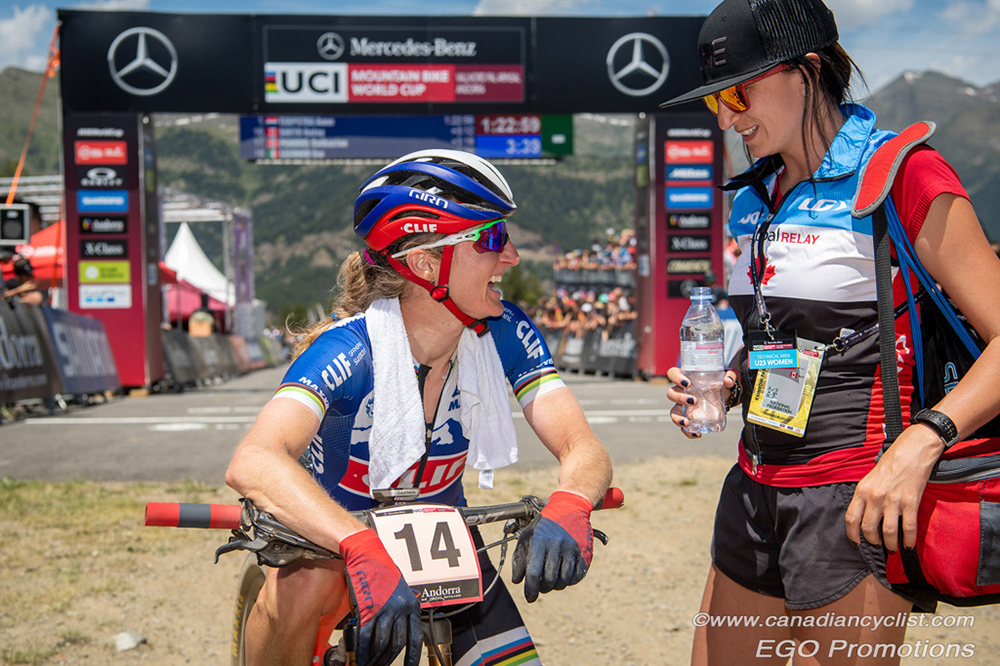 Pendrel admitted that it wasn't her original plan to attack so early in the race, "No!  I just found myself in position and thought, 'hey maybe this will work out', even though I know from other years that whoever leads the start does not finish in the lead.  It was exciting to feel that strong again, though, and gives me some confidence that at lower elevation a podium is 100% in reach.  I wish I could have held on for a better finish, but my body just didn’t have it by the end."

Smith was disappointed that an early crashed affected her race, "It was hard, hot and dusty!  I wanted to be steady and smart on the start, but I didn't intend to start quite so slow.  I was feeling good and confident I could move up, but I crashed on the grass slalom on Lap 1 and it took me a while to get back on it after that.  I had an okay day, nothing special, but it can't always be fireworks, I guess!  I'm satisfied with my effort ... but I want more!!"